Founded in 1541 by Spanish conquistador Pedro de Valdivia, Santiago or “the city of the island hills” as it’s known, is not only the Capital and largest city in Chile, it’s also one of the largest in the Americas.

The sprawling metropolis is located entirely in Chilies central valley, surrounded by the Andean mountains and the Chilean coastal range, the flat valley and mountain combo protecting it from any serious weather repercussions arising from the clashing of the harsh desert heat coming from the north and the icy southern breezes. It’s landscape is expertly defaced by standalone cerros or mountains, a multitude of green spaces and the Mapocho river. A chain of parks and green spaces playfully dots the landscape from east to west through the cities 17 million inhabitants.

The central hub of the country’s power, government and economy, the Chileans say “Santiago is Chile, and Chile is Santiago”. Even more so than normal capital cities, Santiago is awash with cultural events, sights to see and things to do.

Each of the city’s neighborhoods provides an interesting perspective to the societal changes and developments the city has seen since its days under dictatorship and extreme earthquakes such as in 1960 when the largest ever documented  struck a whopping 9.5 on the Richter scale causing unimaginable damage.

An interesting fact we learned is that nearly every day Chile suffers some form of earthquake. Sometimes you can feel the ground shake ever so slightly, not always obvious, it could be easily mistaken for the passing subway train. Earthquakes cause little panic and as a local told us, if you see a Chilean run that is when you pound the pavement. Otherwise if you feel a small earthquake, never worry.

A city that is constantly changing, unlike say 10 years ago, now you can find a more dynamic and diverse way of life, splashed with different cultures from Colombia and Peru to Haiti and Venezuela.

How to get there:

As we said Santiago is the central hub of the country, and as they say all roads lead to Rome, or in this case Santiago.

You can fly in to Santiago’s Arturo Merino Benítez International Airport. It’s located about 17km from the city, from here take a collectivo leaving roughly every 15 minutes going to the Pajaritos metro stop for $5US. Then it’s only a short metro ride to downtown.

We should mention, to use the metro or bus system in Santiago you’ll need to buy a bip! card. The card will cost you $2000 CHP, but comes with $1500 travel credit.

This will be very useful if you plan spending a couple of days in Santiago. Just bear in mind, there are 3 different tariffs depending on the time of day:

You can take a bus from literally anywhere to Santiago. Your arrival terminal will depend on where you are coming from,

From the south it’ll be either Terminal Santiago (also confusingly known as Estación Central) or Terminal Alameda.

From the North of the country buses normally go to Terminal Alameda, San Borja or Los Heroes.

From the central coast, including Valparaíso and Viña del Mar, you’ll arrive in Terminal Alameda or the smaller Terminal Pajaritos.

Favourite Free Things To Do:

Starting with the most obvious choice, we have enjoyed the Tours4Tips Free Walking Tours that operate across a number of Chilean cities. There are two available every day, one at 10am and the other at 3pm. If you are a fan of walking mixed with learning and have the time (and no dollar!), we suggest you join both.

The 10am offbeat tour focuses more on cultural aspects of the Santiago; visiting everything from the Vega Farmers Market to the local cemetery, which might seem off but in fact a visit here is high on the list of suggestions by other travel sites. It meets outside the Museo Bellas Artes.

Whereas the 3pm highlights walking tour is based solely around the city centre and downtown, with insights and information into the history of Santiago, and Chile. It also meets outside Museo Bellas Artes. 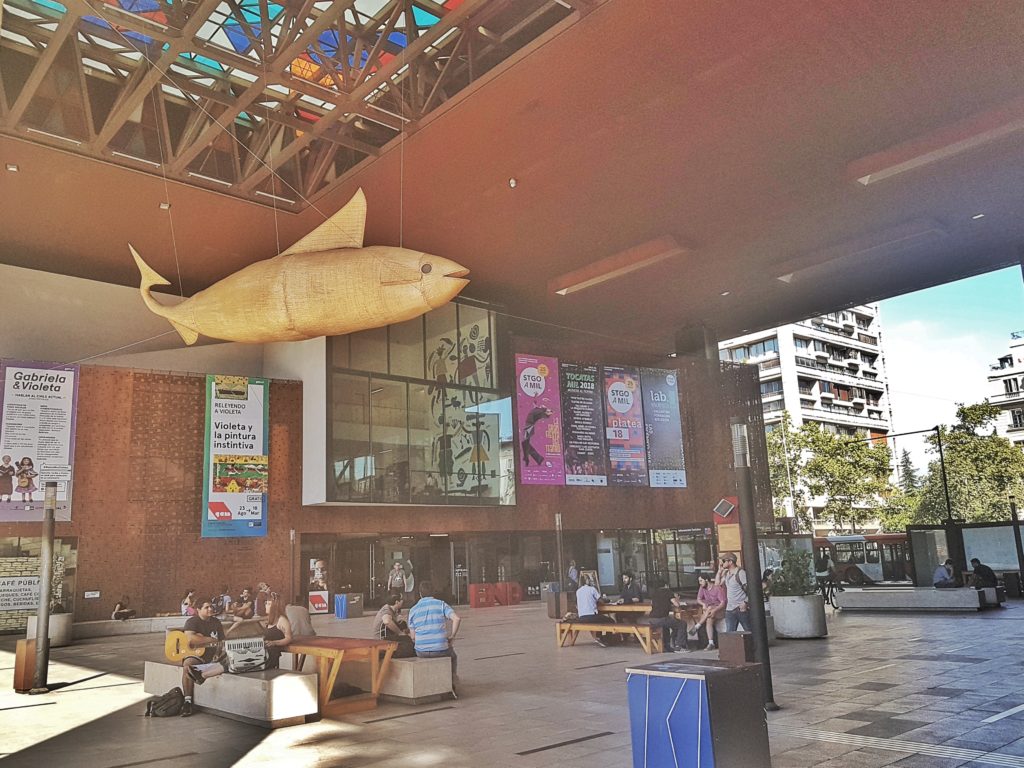 Although the 3pm Walking Tour does pass through here, we suggest taking some time to visit and fully immerse yourself. The most appealing part is that every event held here is free to visit, with the exception of theatre shows. All throughout the year there are plenty of expo and exhibitions which are sure to inject some Chilean culture into your Santiago stationed days.

Arrive just in time for sundown to catch some dance groups who come here to practice and perform to only Chilean music. Soak up the wonderful buzz as darkness draws, and since it is open until 11pm, that gives you plenty of time to squeeze in an eventful day to then unwind here. 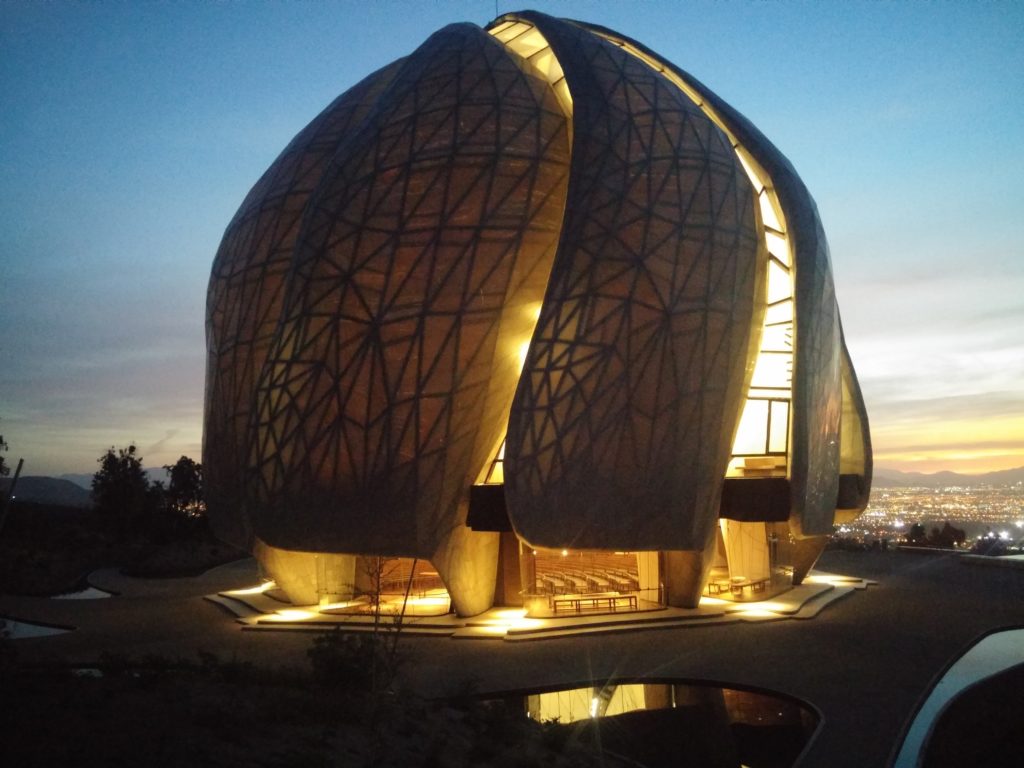 Probably the one photo on our site that isn’t ours (Don’t ask!)

The first and only Bahá’í temple in South America, whether religion is of interest to you or not, this beautiful piece of architecture and place of worship is an ideal place to escape the city and enjoy a tranquil setting on the hills of Santiago.

Not only does it encourage a trip to a lesser visited neighbourhood but it is also provides an enjoyable spot to watch the sun set before it itself brightly lights up, transforming into a true piece of art.

Open until 7pm and open to public, we found the neighbourhood to be a safe one and so suggest a trip in the evening to witness it both during the day and night. Visit before 7pm to see the interior and hang out for dusk.

To get there, take the Metro to Grecia on line 4, and you can either walk 30-40 minutes straight up Avenida Grecia until you reach Diagonal Las Torres. The entrance will be up on your right.

To avoid the uphill walk, from Grecia Metro station, grab any bus heading towards Diagonal Las Torres such as the 506, or 507 for $610.

Remember to arrive before 7pm or you won’t be allowed to enter. 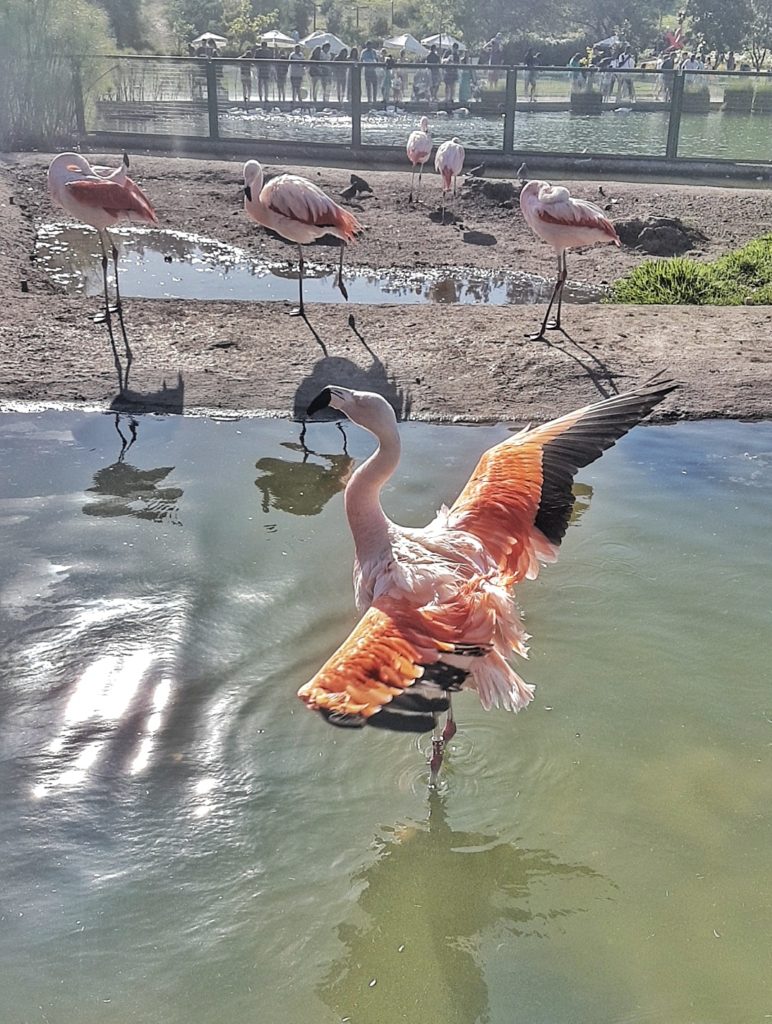 Will ya flamin-GO away with that camera mister!!

Santiago has a lot of beautiful green spaces but this was one of our favourites, take metro to Tobalaba and walk 10 minutes.

This stunning lush park is home is home to many cultural events as well as two lakes, one where locals race small model boats and one where you can go to admire and feed injured Chilean flamingos.

Pack yourself a picnic and go enjoy this outdoor wonderland of manicured grass and floral scented air. 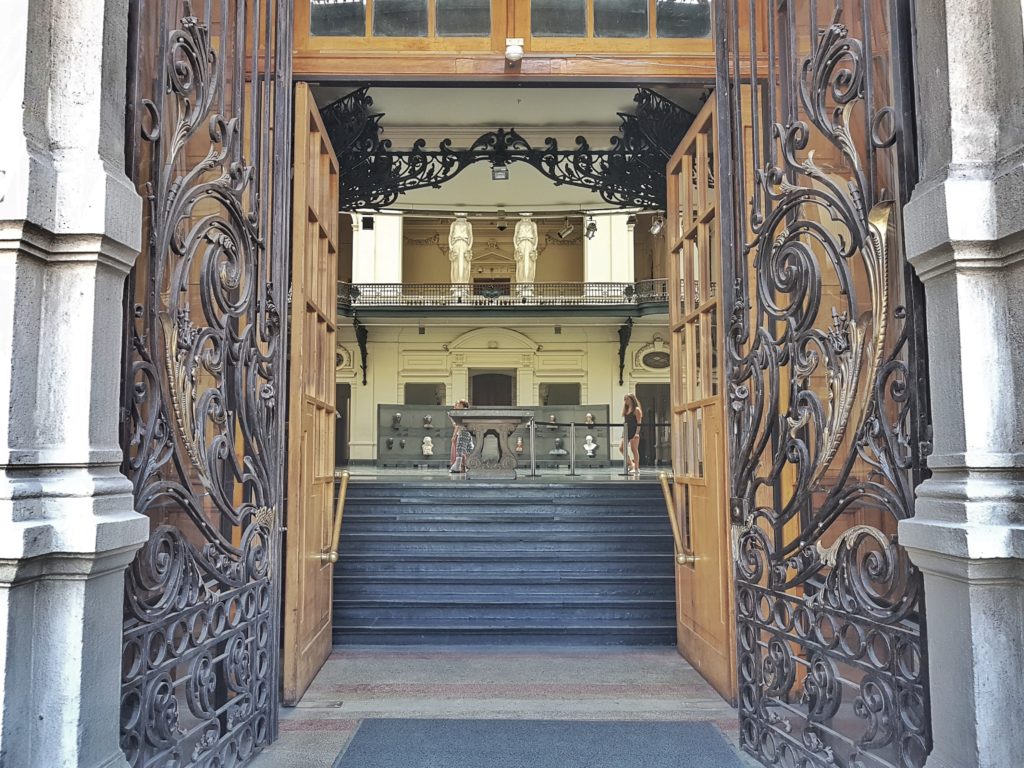 Literally the museum of beautiful art!

Open from Tuesday to Sunday 10am-6.45pm, admission is free. There are beautiful marble statues statues and busts galore in this stunning building. It reminded us of Grand Central Station in New York with its high arched glass ceiling ceiling and marbled walls and floor.

Visual Memory of a Nation:

Located under the famous Universidad de Chile, in the metro station of the same name you will find the visual history of Chile from the birth of America to the dark days of dictator General Pinochet.

The walls of the high ceilinged station are covered with giant murals in two sections (1,200 square meters).

The murals were created by Chilean painter Mario Toral. They sprawl mercilessly over both ends and side walls of the station platforms. This is an absolute must see. 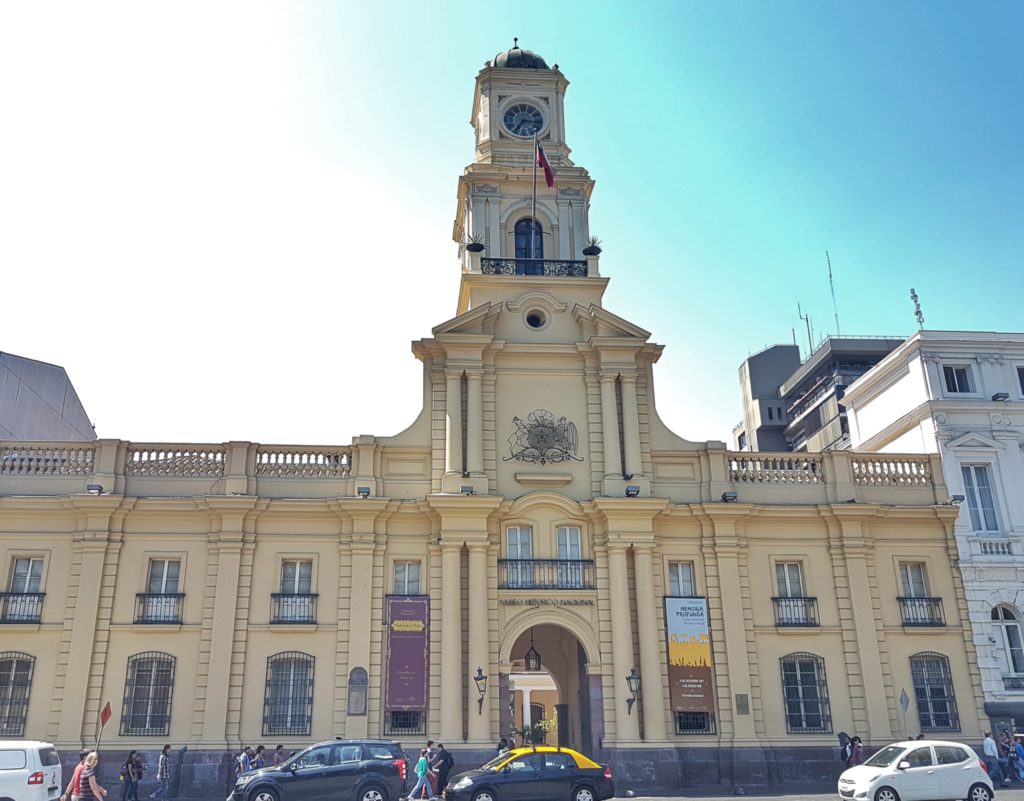 In Chile they even recycle buildings!

Steeped in as much history as it houses, is the Palacio de la Real Audencia, which used to be the first Chilean Congress after the declaration of independence from Spain in 1811. It was also the official office of the first President of Chile, Bernardo O’Higgins.

Later it became the high court in Chile until 1982 when it was transformed into Chile’s National Museum of History. If you really want to know a country, you should know it’s history and there’s no better place to learn about Chile’s history than here.

Entry is free, and an audio guide is available in English.

The plaza itself is quite beautiful and very busy. A central fountain marks kilometer zero, the center and founding point of the city. Surrounding this are trees, benches, grassy patches and tons of walking salesmen (in case you fancy an ice-cream).

You will notice that some of its enormously tall palm trees appear to have braces to hold them up. This is less to do with their height and more the fact that Chile lives directly above a faultline between two tectonic plates and is really prone to earthquakes.

On the southern side of the Plaza is the main shopping strip Paseo Ahumada (the best place to buy anything technology related and/or a completo). To the east is a mix of residential and commercial zones, but the more east you go the more radical richness you will find.

To the north you are faced with “The kings power” city hall, the main post office and and other state buildings. To the west the Cathedral of Santigo proudly stands, the biggest church in Santiago but not the oldest.

As you ramble around the city you will notice there are several bar style coffee shops, nothing unusual there right? if you look a little closer you will notice a minor difference. All the counters are open from the waist down and the servers (all female) are sporting short skirts and great pins!

This is due to a really weird cultural anomaly. Being heavily influenced by the British, Santiago has a huge tea culture, so when some smart entrepreneurs tried to introduce coffee houses the idea didn’t initially take hold. Seeing the need to use a different approach and using the old adage “sex sells” cafe con piernas or coffee with legs was born.

Men in their droves now pop out at of the office to one of the 100+ cafes around Santiago’s CBD for a quick coffee and a little eye candy. As with all good ideas, someone always goes too far, and you will find some “cafes” where the techno music blares and the waitresses wear very revealing swimsuits or even underwear.

Totally worth checking out, if for no other reason than its in complete contrast to Chile’s normally VERY conservative attitude.

While Santiago is far from our favorite place in Chile, it made for the perfect final stop and is definitely a city of interest unlike so many we have been to. And while it is expensive (sure isn’t Chile as a whole a purse punisher) we managed to enjoy a frugal few days thanks to its size and abundance of FREE appealing attractions. We hope you have a ball without spending a kidney, and as always should you need anything else or have any questions talk to us goose!