The minute we set eyes on Arequipa, it became painfully obvious that it is one of the more, if not the most affluent city in Peru.

The types of stores and prices both indicate that the Arequipeños have a much better grasp on the finer points of tourism and the value of the almighty dollar than their less savvy countrymen. Despite this, it is still possible to do the city on a budget.

We spent a good few days wandering around the European-esque city, and had a great time in spite of our aversion for all things expensive and city like. The city is full of artesanos, acrobats, jugglers and musicians own to its large tourist population.

“Its the best place in Peru to make money” one busker told us, also it’s a nice break in the very long journey from Lima to Cusco. Either way Arequipa is definitely a place I would recommend you throw on your Peru itinerary, even if it is just to chow down on some gringo food, which might be the last time you see such grub for a while. 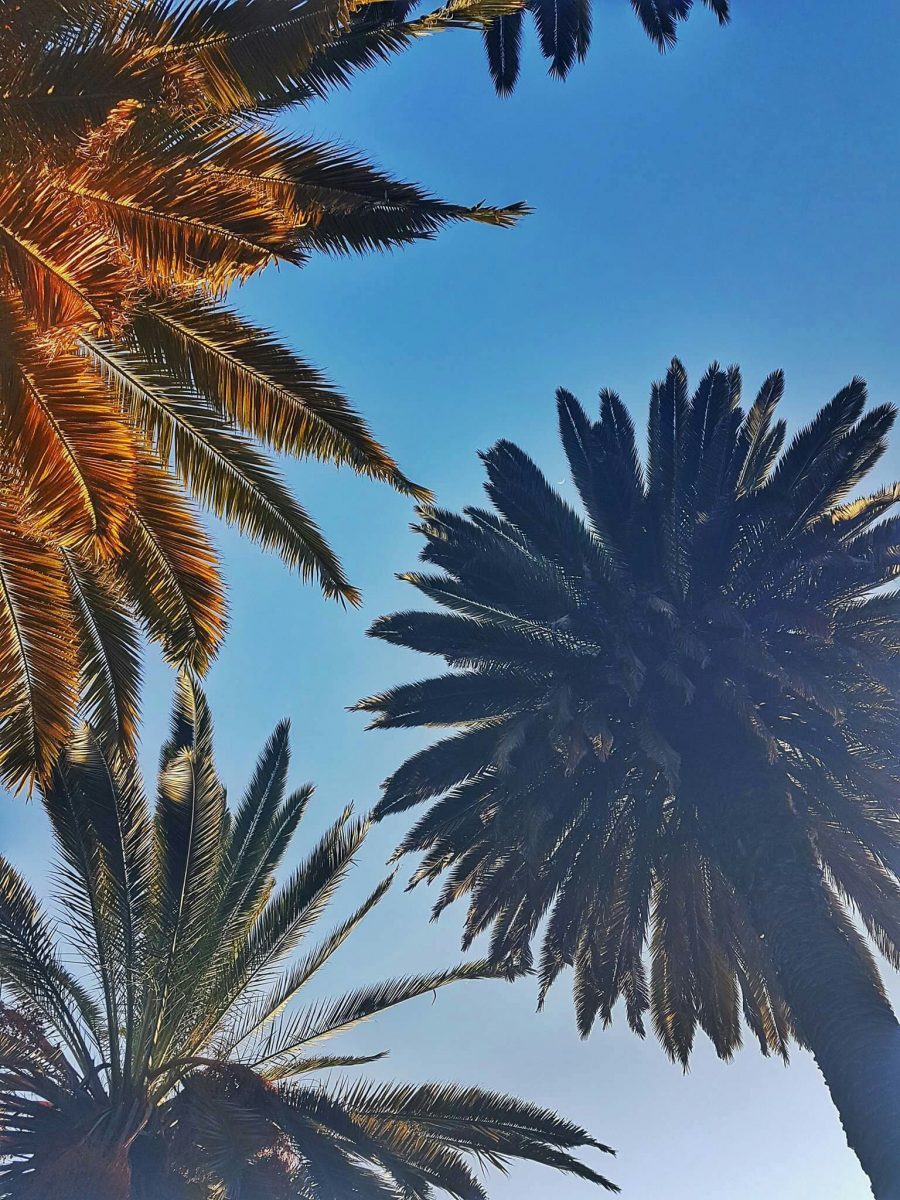 Where am I Peru or Miami?

From Lima to Arequipa:

We booked with the Civa Bus Company on Calle 28 de Julio.

We paid 50sol pp (€13) for the economic bus, with reclining seats and a TV. It was the cheapest price we found but, as we tend to do, we were last minute grabbing the bus.

When you leave the bus terminal in Arequipa, head towards the large yellow bridge. For 2sol (€0.50) take the public bus to either Gran Via or Guyanbocho, this is the center area. Double check with the ayudante and the ask driver to drop you off as close to the main Plaza as they can.

Standing in Plaza de Armas, with your back to the church take the turn off at the top right hand corner. Walk two blocks towards Puente Bolognesi and Cruz Verde, and on the corner you will see two hostels. There is usually a long line of people on this corner as it’s an unmarked bus stop.

We chose Hostel Casona Bolognesi, not only that little but cheaper (but not by much) the chilled vibes were appealing, especially considering we had just spent over 40 hours travelling from the Amazon to Lima and so forth. They offered us a private room with private bathroom and a shared kitchen cost for only 30sol (€7.90) per night.

The hostel next door which is just as cheap has more of a party atmosphere if that’s what you’re in the mood of.

Things To Do in Arequipa: 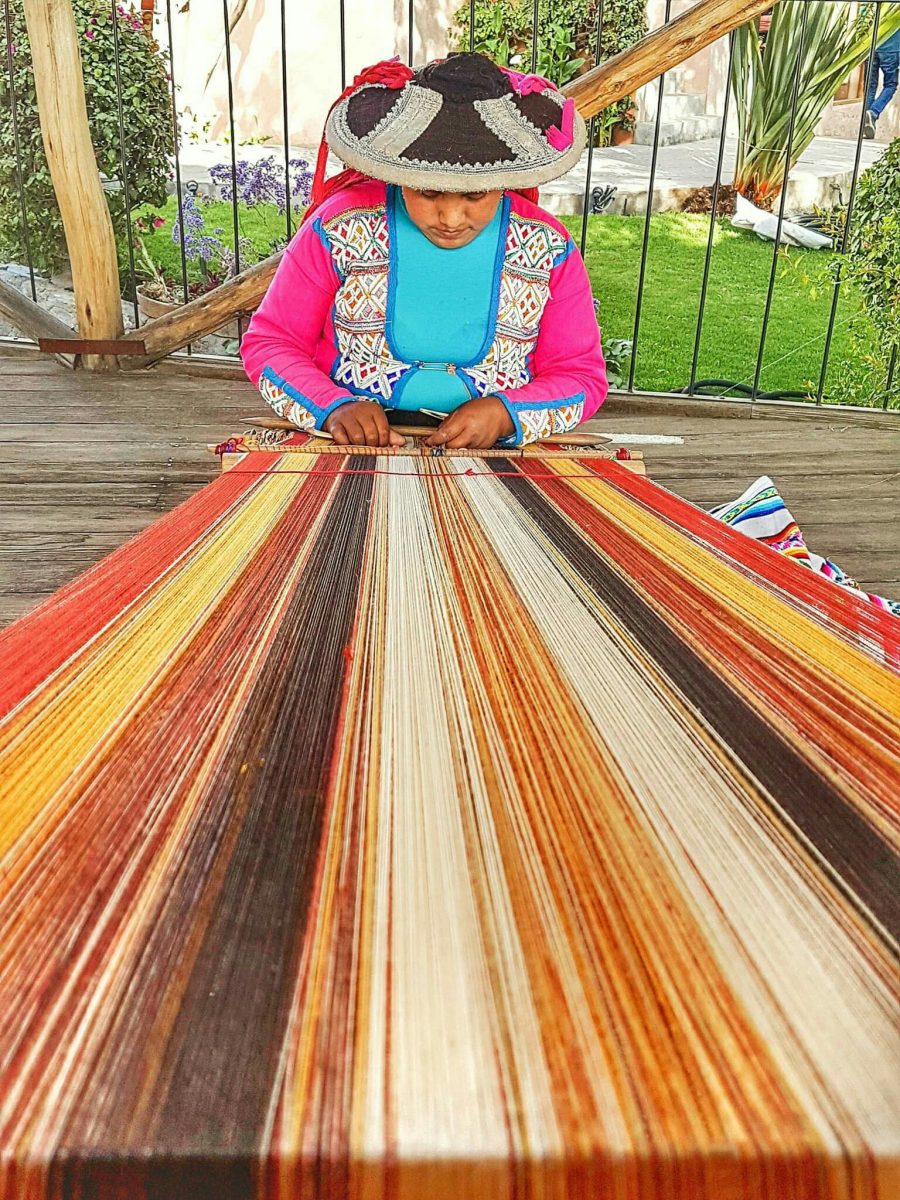 You can’t pull the wool over my eyes!

Just off Plaza de Armas is the colourful San Camilo Market. Cheap street food outside and fresh produce inside, forget the supermarker as this is where you want to do most of your shopping. Just make sure you grab a papa rellena from outside as my God they’re insanely delicious.

Facing the Plaza’s church, take the bottom left road straight until you meet Calle Consuelo, swing a left onto Consuelo and walk three blocks until you see a large blue building on your right hand side.

Pop in to find some really good deals on the freshest fruit and veg.

Chaqchao, on Calle Santa Catalina, have daily chocolate making classes at 11am and 2.45pm. If you’ve always wanted to get yout ‘Lindt’ on and release your inner oompa loompa, why not give it a bash.

Priced at 60 sol (€15) per person for 2.5 hours, it’s certainly not the most expensive. We skipped it though, after two months working as chocolateers on a farm in Medellín, Colombia not to blow our horn but we could have taught the class! 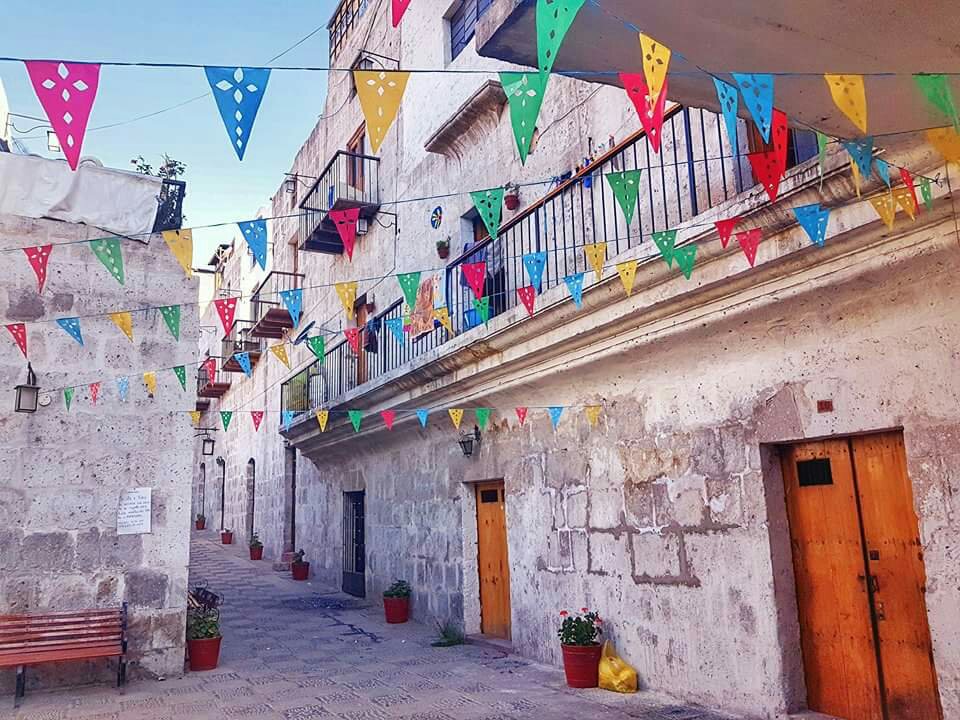 Won’t you take me to… Funkytown

Arequipa has a number of ‘Free Walking’ Tours a little too many. And being honest, here is one not to do!

This specific ‘Downtown Walking Tour’ runs Monday to Sunday at 10am and 3pm. The Meeting point is Calle Santa Catalina #204.

It’s awful. One of the worst we’ve ever taken. There is more talking than walking tour! The guide was a little too eccentric and cocky to be leading a group of Gringos and some of the tales he shared were so “out there”. For example, at one stage he asked Luke to demonstrate rubbing a dead guinea pig up and down my naked body, while he told a story about traditional Andean sacrifices.

We’re OK with being made feel a little awkward but others hated this. We also spent nearly a half an hour sharing stories about our own countries, something that no one cares about since we were all here to learn about ‘The White City’.

NOTE: We here at The Ungraceful Guide are HUGE advocates of the free walking tour as a good way to get to know a city, in saying that, this one is The ultimate “avoid it!”. The guide didn’t really answer any questions and spent most of the time talking about how much better Arequipa is than anywhere else. There were several other walking tours that I’m sure cover the same attractions, maaaaaybe go with one of those.

EditHead out to this unique, view point where the landscapes of Arequipa and Mount Misti are framed by white sillar stone arches. You’ll find some beautiful photo ops. There is no entry fee but visit in the afternoon when there’s not a whole bunch of tours clogging the place up. 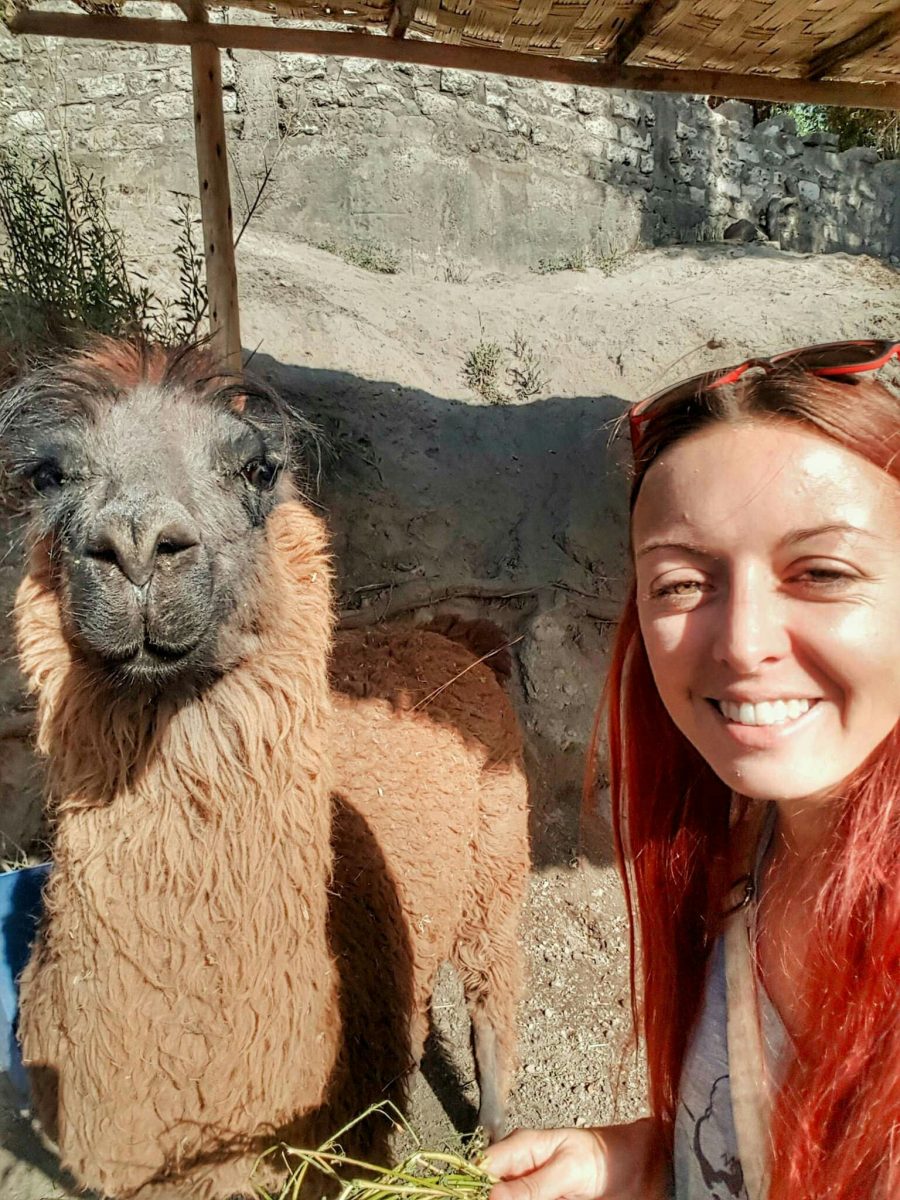 Same hair, but who wears it better?

It takes 30 minutes to visit Mundo Alpaca at no cost, a worthy visit considering Arequipa is the alpaca capital. There is a small guided tour with an English speaking guide who explains the quality, types and process behind alpaca and llama wool.

Make some new wolly friends by hanging out with the llamas on site. Located in Óvalo San Lázaro, from the Plaza de Armas, head straight down Calle Santa Catalina until you see a junction. Mundo Alpaca is directly across this junction.

We visited Mundo Alpaca on our own (but know that it is included in all the free walking tours) however some might not give you much time to hang with the llamas which, let’s face it, is why we went.

Also, on a very important side note, facing Mundo Alpaca is a very kind woman selling 1 sol (€0.26) Fudge stuffed churros. Be bold, have a snack and yes, make sure she rolls it in sugar. 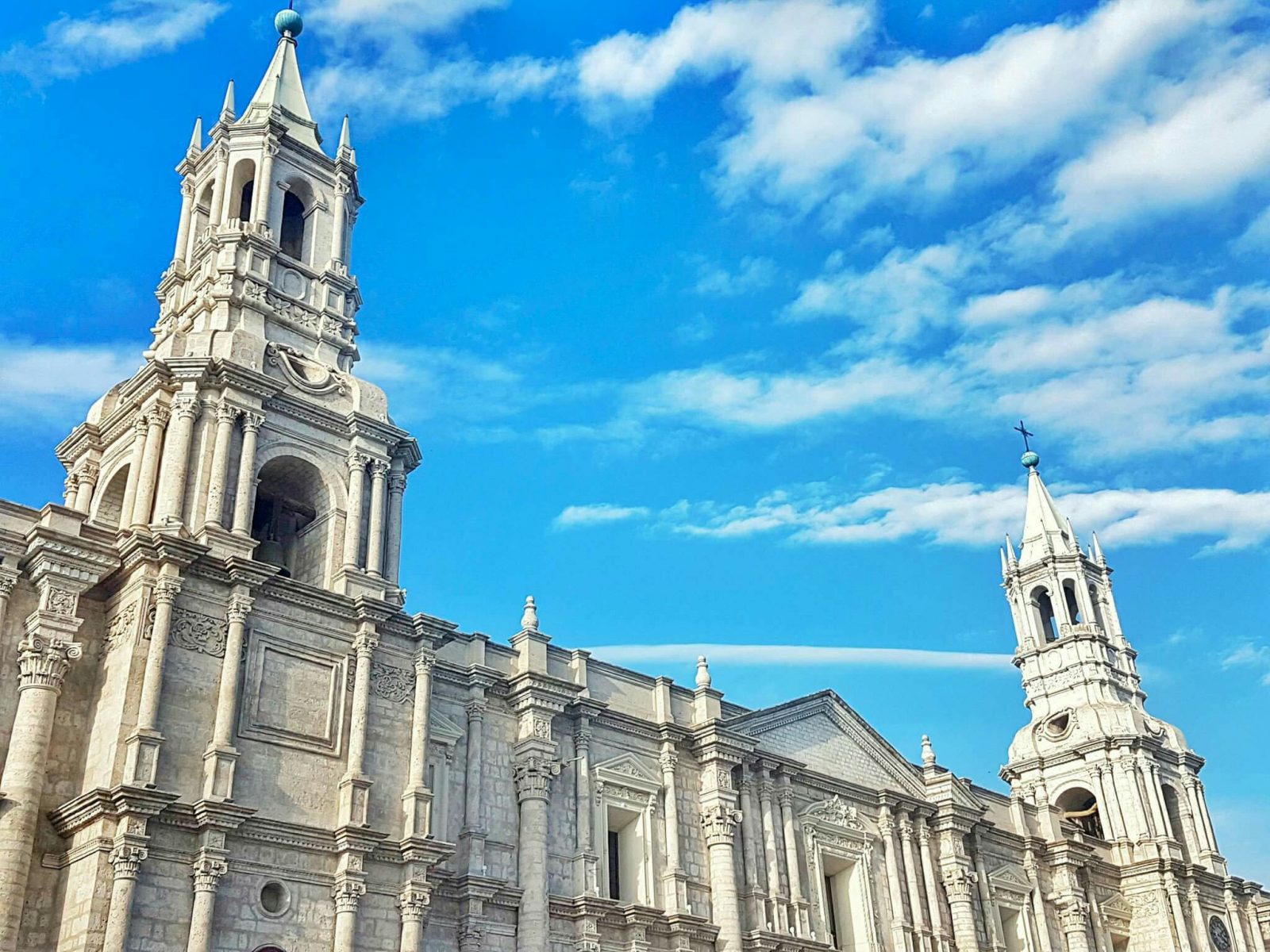 Home to one of the the biggest organs in the world! *sniggers uncontrollably*

Visit the Basilica located in the Plaza de Armas from 5-7pm when it’s free to enter. The cathedral is famous for its pretty unique organ (one of the largest pipe organs in the world) and the  live music that happens here three times per week (but not during the gratis hours, unfortunately).

As always we hope you found the post informative, but if there’s anything else you need to know please feel free to drop us a line.