How To: Visit The Ben Duoc Cu Chi Tunnels DIY

If you haven’t heard of the Cu Chi tunnels we highly recommend you get your google on and have a gander. In a nutshell they were a huge network of really, really narrow tunnels that ran under most of Saigon (Ho Chi Minh City) that were used as supply lines, hiding places, living quarters, hospitals and much more. They were the main advantage the Vietnamese had against the USA during the war.

The Cu Chi tunnels are like the Machu Picchu or the Anchor Wat of HCMC (Ho Chi Minh City), you cannot come to Vietnam and not visit. So visit we would, but first we set about our usual game of researching the task at hand and every conceivable way of doing it DIY.

This turned out to be a very fruitful search indeed as we soon discovered, not only is there an alternative to the tourist crowded, over-priced, Ben Dinh tunnels called Ben Duoc, but they’re cheaper, bigger and harder to get to, and best of all from our research there didn’t seem to be a tour that goes to them. We do love an adventure.

There are massive pros to going to Ben Duoc over Ben Dinh. Despite the fact that it is larger (being 300 hectares as opposed to 70 at Ben Dinh) and more historically significant (the commander of Saigon was stationed here).

The site is less frequented by foreign visitors because it’s further from Ho Chi Minh City than it’s tour laden counterpart. This is the site where school children and Vietnamese people come to learn about their history and the part the tunnels played in them, and so has a nice authentic feel to it.

Consisting of three levels at 3, 6 and 10 meters below ground, it’s easy to see how the Viet Cong used these labyrinthine passages to hide from and strategically attack “the enemy”. Once home to 16,000 people, and despite being widened from 60 x 80 cm, to double that, the tunnels were a snug fit at times, but totally manageable, even for Luke (he’s a little claustrophobic bless him). If you are claustrophobic this tour may be a challenge for you, although Luke does suffer quite badly and said it wasn’t to bad, just do wear something you don’t mind getting dirty so you can crawl or curl up into the fetal position and cry though. 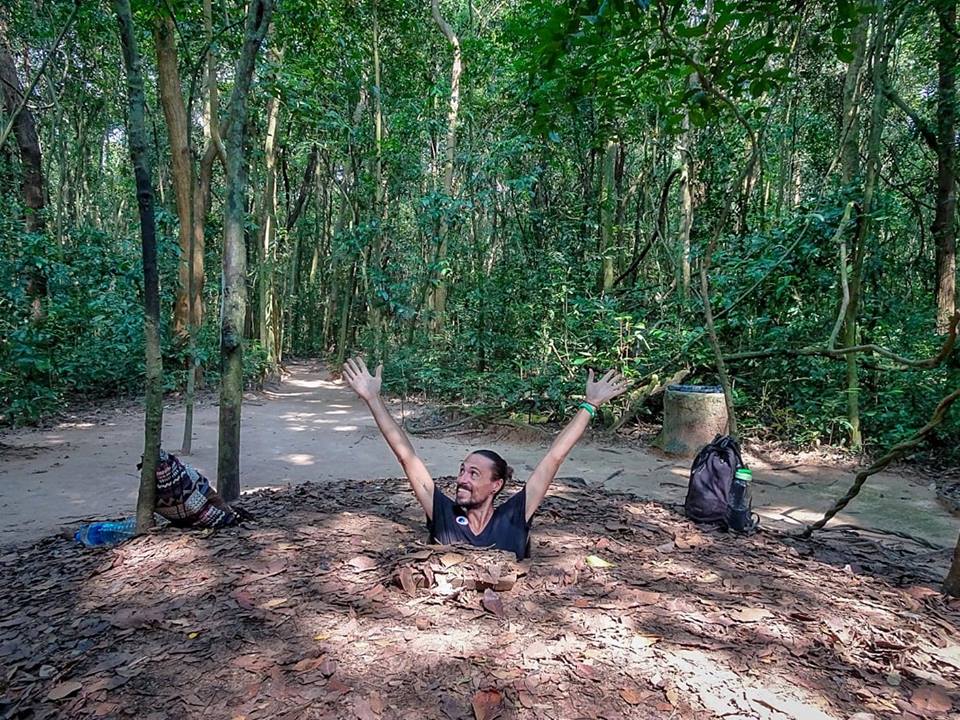 Putting a brave face on

There were only 6 people in our group, and with our incredibly knowledgeable, English speaking guide we squatted and crawled, we scraped and we scrambled and it was worth every second. He told us some very cool stories and interesting facts passed to him by his grandfather, including describing all the booby traps and how they worked, as well as what day to day life would have been like in the tunnels. This added a special feel to the tour and helped us to connect better with the subject, it felt like the guide had an actual connection to the place, he has family history here.

At the end of the tour we were treated to a snack of boiled tapioca with a side of salt, sugar and peanut to dip, the most common food in the region during the war. Informative, cheap, not busy AND snacks? This DIY way was a total winner in our books. 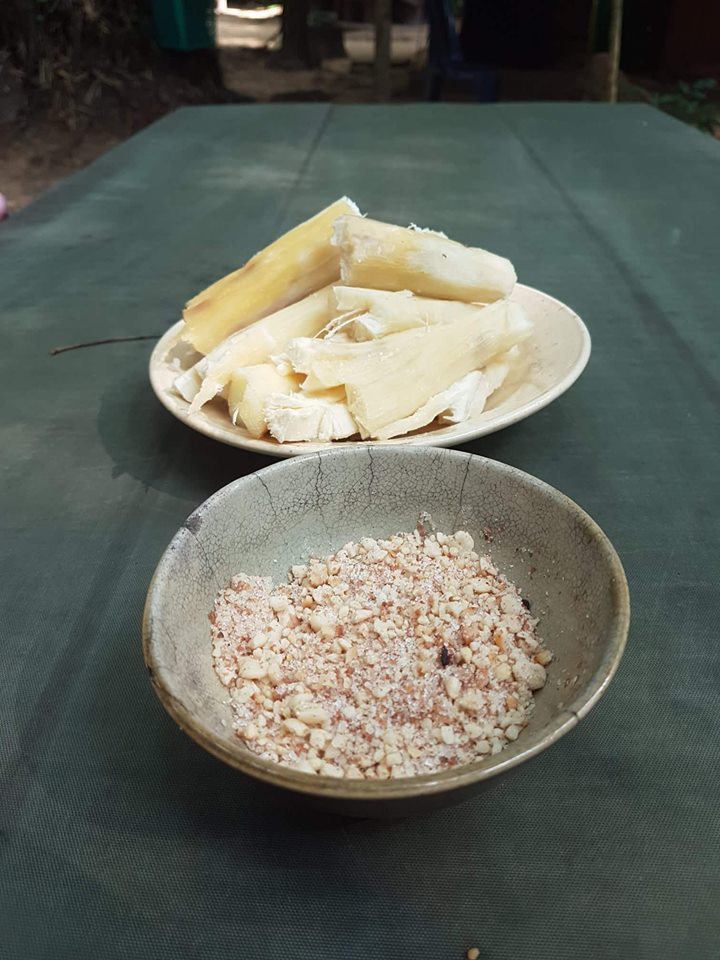 You’d be nuts not to try some!

If you’re pressed for time, or just couldn’t be arsed with all the messing you could just do a full or half day tour. We priced tours from HCMC and they are quite reasonable. The Sinh Tourist, the most reputable agency in the city charge 170,000 VND (€6.30) for a full day tour including the tunnels, lunch and either a noon ceremony at the Saigon Cao Dai temple or a HCMC tour, and a half day to just the tunnels for 110,000 VND (€4). Again always check your hostel or guesthouse for prices.

But really, wheres the fun in that?

Take the no. 13 bus from outside the Hideout Hostel on Pham Ngu Lao street. There is no stop, you just flag her down as shes going past. Alternatively near the Ben Thanh market, you will find the Cong Vien 23/9 park. Across from the park, at the southern end is a small bus terminal that looks like a large carpark, you can catch the bus here also.The bus costs 7000 VND (€0.26) per person and you need to stay on until the last stop, Ben Xe Cu Chi. The journey takes about 1.5 hours.

At the Ben Xe Cu Chi take the no. 79 bus. If you can’t see it don’t worry, they’ll see you and start waving… seems there’s no other reason for tourists to be here, so don’t think they’re being presumptuous.

This second journey takes 30 – 40 minutes and costs 6000 VND per person. Be sure to tell the driver / ticket lady you want to go to Ben Duoc (pronounced Bin Zuc). Keep your eyes peeled for the signage that indicates that you’re close but the driver and his assistant knew exactly where we were going and even stopped one tourist from getting off at the wrong stop. Sounders.

Tickets and where to go: 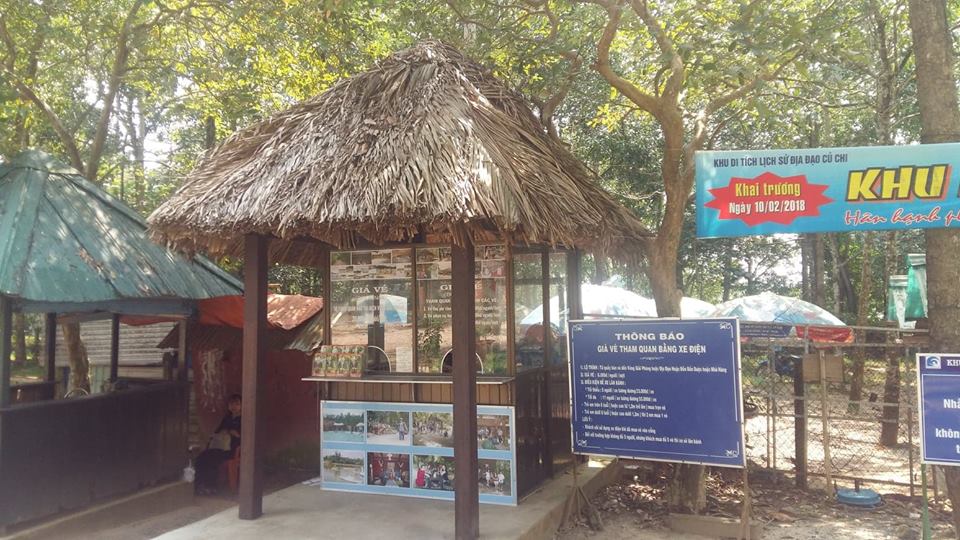 Once you get off this bus cross the road and follow the path in front for 2-3 minutes staying to the left until you arrive at the ticket booth.

Entrance is 90,000 Dong per person, this includes a guide. You CANNOT enter without a guide.

Follow the path for about another 500 meters until you come to a sign that says entrance to tunnels and you find a small hut that says ticket checking.

The gent from the booth will direct you toward your guide and bob’s your Vietnamese uncle. You’ve reached your destination.

Catch the passing #79 from the same place it dropped you off, along the main road outside the tunnels’ entrance. As far as we know, the last bus leaving Ben Duoc is at 5pm so we recommend the latest you should be waiting on #79 back to Cu Chi Town is 4.30pm. It would be an expensive taxi / motorbike ride back to town.

From Cu Chi Town, #13 buses run to HCMC until 9pm so there is no panic there. Just be mindful to get on and grab yourself a seat while it’s empty. No one wants to stand for over an hour after squatting all afternoon. The #13 bus terminates at the 23/9 Park near the Binh Thanh Market.

If you have the time we would highly recommend taking the bus and visiting Ben Duoc. Plus the whole round trip journey and a guided tour for €4.30? Sign us up there Sandra.

As always if you want more info, have anything to add or are bored at work, please give us a shout.