Mexico: Our Ungraceful Guide to Grub in Mexico

First off let me start by saying this will not be a complete list of all available Mexican food, trust me I wish I had the time or the money to compile that list, but Mexican food is as varied as it is tasty.

No, this will be a rough guide to the most typical dishes available based on what we’ve tried, trying to take the confusion out of ordering at the many colourful food stands on offer. So if you don’t know your asado from your elote this is a pretty good place to start.

We were amazed at the food here, to be honest we were expecting burritos and fajitas but the reality is much different, and soooooo much better.

So when it comes to ordering at the food stalls there are a couple of things to bear in mind. The dishes at first glance seem to variations on a theme. Firstly the dish you order will generally be based on the type of tortilla it comes on with different toppings. With that in mind let’s take a look.

Small soft flour tortillas roughly the size of a tea saucer topped with your choice of meat (we’ll go into these later), onions, peppers and guacamole (and sometimes a kind of feta cheese) unlike their European store bought counterparts, they are not crispy or U-shaped. A side plate sized crispy fried flour tortilla, slightly resembling a sturdier poppadom topped with frijoles (a black sauce made from beans), guacamole, onions, salsa rojo (spicy sauce), cheese (either feta or a mozzarella-esque style) with your choice of meat.

Expect to be full on just one.

Same as above but on a tortilla which is thrown onto a flame grill with the ingredients on it, about the same size as a medium pizza. Some places serve them folded in half with the filling in the middle. It’s worth noting the locals eat one per person, but we found them filling enough to share one between two people. 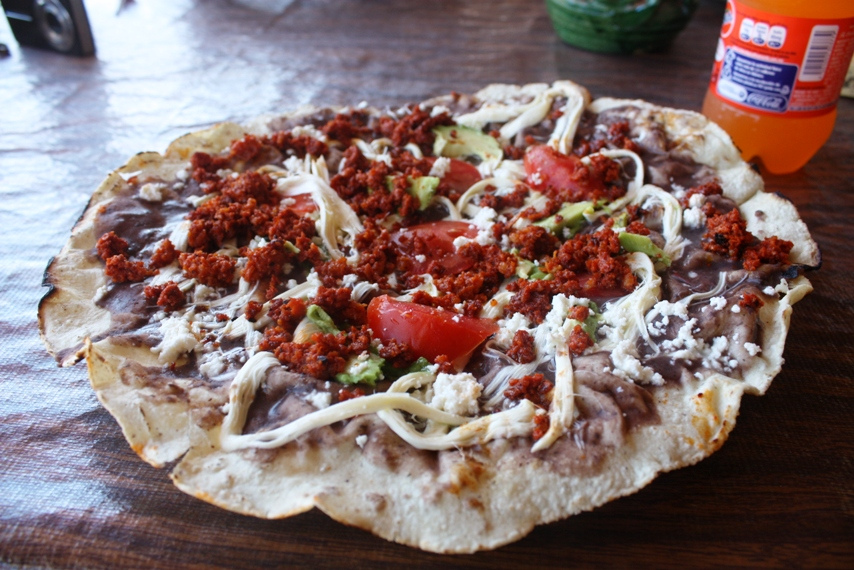 Mexican Food: Our Favourite – The Tlayuda

At each stand all of the above come with a choice of meat and the choice seems to have been the same at all the stalls;

Peppered beefsteak flattened with a mallet.

Spicy pork sausage made with paprika.

Three little piggies style (pork), you’ll see this everywhere. Stacks of boiled and then fried pig that is then diced and used as filling.

Cows head…. yup HEAD. We didn’t see this at too many places, but we did see it. Just in case you’re feeling adventurous.

Aaaaaaaand stomach. Again, not readily available but now you know you can either try it or run screaming. 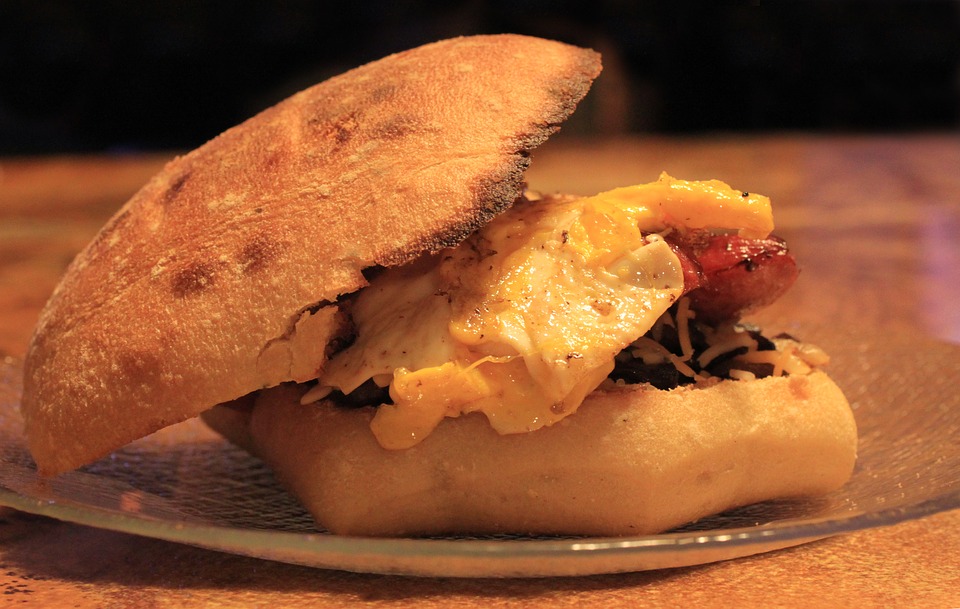 The type of torta is normally named based on its main ingredient:

The sandwich is usually assembled and then toasted in a press or on a hot plate mmmmmm.

So far, we only came across these in Puebla. They’re delicious and if in Puebla, you won’t miss the opportunity to try one.

A bread roll covered with sesame seeds, made with egg, it kind of looks like a cake or brioche usually contains sliced avocado, milanesa meat, white cheese, onions.

Expect to pay roughly the same as a torta. But bear in mind the 15 peso dealies will have considerably less toppings.

An American football shaped treat made from a type of corn pastry and typically stuffed with papas con chorizo (potatoes and chorizo), and topped with quesillo (white cheese), Guacamole and salsa rojo. You really wanna try one of these tasty torpedos.

Again there are numerous types of empanadas, this refers only to the typical ones at the food stands. Same pastry and toppings as molotes, but stuffed with a kind of feta cheese and shaped like a findus crispy pancake (a semi circle for those of you under 30). They are so good and so filling!!

Una ración is 4, media ración is 2 and will set you back about the same as the molotes 40 pesos / 20 pesos respectively.

We thought to give a mention to these hopping critters, especially if you plan to visit Oaxaca. On every corner of the city you will see baskets stacked with these velvet red grasshoppers. They look inviting, misleading almost, kinda like sweets or little chilli peppers. Until you take a closer look and realise this thing is about to spark up a fag and have a conversation with you. Nonetheless, we tried them and although we weren’t ballsy enough to snack on them like peanuts (which you will see the locals do) they’re edible and  they’re covered in chilli oil – yum. But hey we did try them and we deserve bonus  points for that, right?

So there you have it, not the full culinary list by any stretch of the imagination, but a pretty good first bite at it (sorry couldn’t resist). If you venture into one of the many food markets be sure to try Mole, a local delicacy in Oaxaca.

There are 7 different types… all beautiful. Another word of advice is, if like us, you are coffee addicts, you may have to clarify in some places that you want a coffee with milk, not milk with a spalsh of coffee. Confusing, yes. We ordered breakfast one day, alongside two cafe con leche, and were given large bowls of hot milk, with a hint of coffee taste and some sweet bread. It was awkward as we had already eaten and soon discovered that this is a dish on its own. Also, the hot milk made us more sleepy, contrary to our original goal. The real key to enjoying Mexican food is take what you’ve read and then try everything and make your own mind up.

So roll up your sleeves and remember the golden rule to street food, everything tastes better if you eat it with your hands. 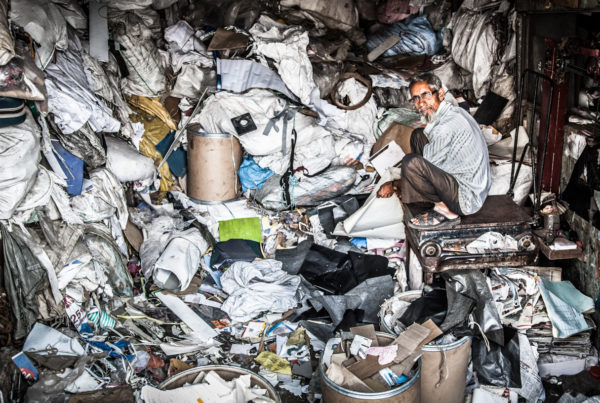