Vietnam: Free And Cheap Things To Do In Hanoi

With a population half the size of Ireland (Roughly 8 million) in one city we were dying to dive into the narrow streets of Hanoi’s old quarter and get our hand dirty (metaphorically of course).

Obviously being the Capital, and having heard so much about Hanoi, we wanted to dedicate a good bit of time to seeing her sights and living her culture, on a budget of course… this is still us after all.

From Sapa To Hanoi:

The only catch with either is that they will drop you at the My Dinh bus station in Hanoi around 8 km from the Old Quarter.

The bus will drop you at the side of the road next to the bus terminal. Head into the compound (you will see all the parked buses) follow the crowd towards the main building and ticket office on the far right of the compound.

Just make sure you’re getting the bus in the correct direction because if you board the 34 in the opposite direction to the city, a quick 20-minute journey could turn into an hour-long loop.

Things To Do In Hanoi:

Free Things To Do In Hanoi:

Hanoi Free Local Tours is a highly rated tour company that offer free English tours from old town to the French quarter and beyond. They will even organise a Hanoi itinerary for you. You do need to book in advance (https://hanoifreelocaltours.com)

Hoan Kiem lake, also known as Turtle Lake is a green freshwater lake in the heart of Hanoi’s historic quarter. Until 2016 it was the home of a giant sacred turtle known as “Great Grandfather Turtle” (Unfortunately he died).

This is an essential part of daily life in Hanoi and is constantly surrounded by local families, street vendors and buskers. A total must-see freebie!

On the Ly Thai To road from the top of Hoan Kiem Lake, only a short walk away, is the 2010 Guinness book of records “Worlds longest mosaic walls”. 6.5 Km of intricate and colourful murals by Vietnamese and foreign artists. That’s a lot of tiles.

You can see as much or as little as you want, maybe best avoided in the mid-day sun though. 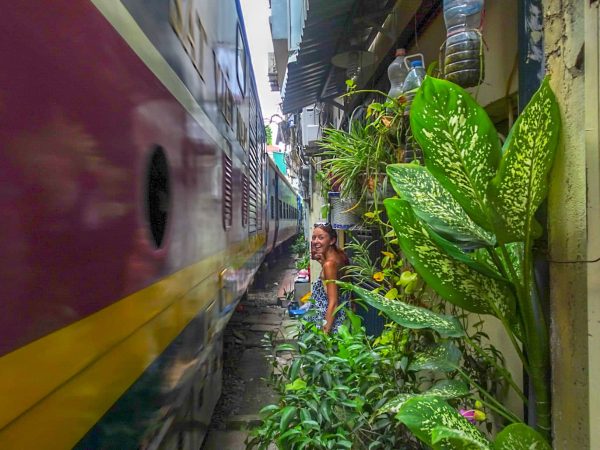 We have a train to catch!

Hanoi’s train street is famous, or rather infamous. A densely populated stretch of live train line, where locals and tourist alike are forced to withdraw into their houses, pull in all their belongings and squeeze in close against walls to avoid the passing of high-speed trains! We’re in!!

There are a number of trains that pass from north to south and vice versa. We took a photo of the most recent times (Sep 2018) but do expect delays, and we suggest arriving a little early (or staying a little later to enjoy the place without other tourists). 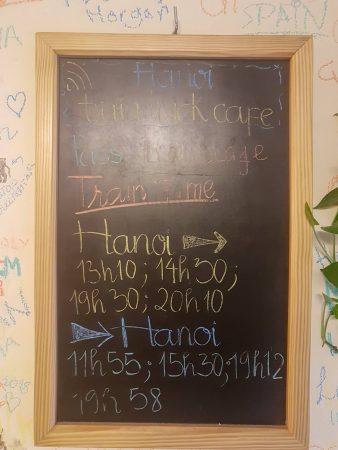 The best thing to do is pop into The Train Track Cafe and check the notice board for all updated times. The owner speaks fantastic English and is happy to help. Drinks (from beers to coffees) start at 20,000 VND (€0.80).

We recommend the afternoon for better photos and fewer tourists. Head down before 2.30 pm to grab some photos of daily life and take some time before the train.

Listen to the locals, they’ll warn you if you need to get in further off the tracks or are in an unsafe position heed their warnings and for the love of Jaysus will ye BE CAREFUL. 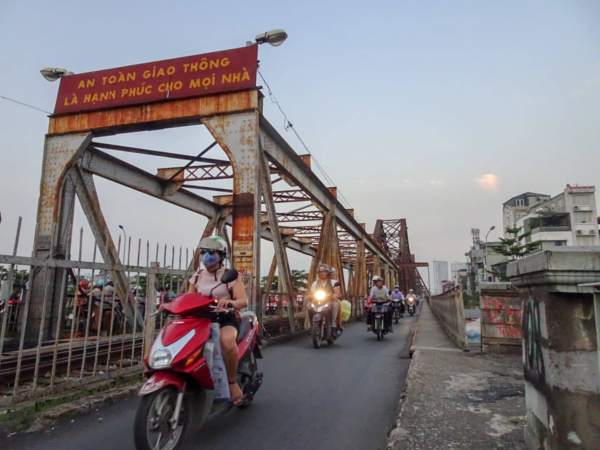 An amazing look at pre-war Vietnam, Long Bien Bridge was the first, and for years the only bridge to cross the Red River.

A wrought Iron bridge with a sunset view? It’s an Instagrammers dream! It’s best to go before sunset (sunset is usually a little after 6 pm so head down for 5.30pm).

The resting place, or rather, the display case of the embalmed body of beloved revolutionary leader Ho Chi Minh (against his wishes we might add). Apart from being an important historical site, it is a really impressive building. 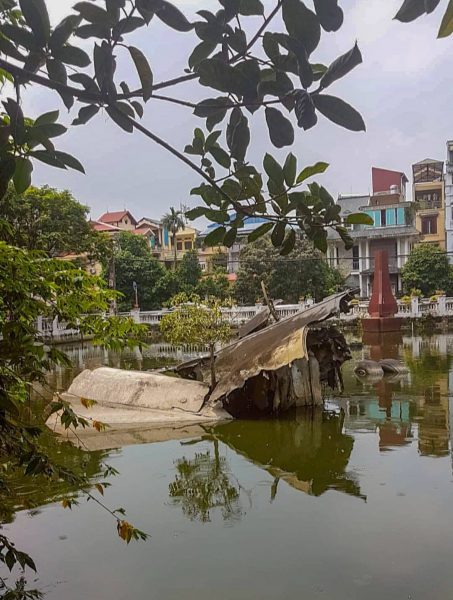 He’s defo losing his no claims bonus for that!

If you walk west on Hoang Hoa Tham Avenue where it meets Ngoc Ha Avenue, you should see a sign directing you to the memorial down a narrow street.

Here you will find the remains of a crashed B52 bomber jutting from a lake in the middle of a residential neighbourhood, a stark reminder of how recent the war still is for these people.

The oldest Buddhist temple in Hanoi, sitting on a small island in the West Lake. Totally worth a look either during the day or all lit up at night, just bear in mind it closes at 5.30pm

Cheap Things To Do In Hanoi:

Ice Cream At The West Lake: 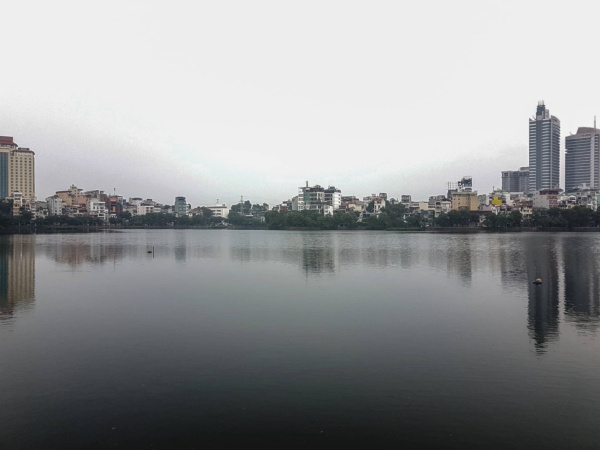 Ok, so a nice sunset stroll around Hanoi’s West Lake technically is a free thing to do, but we’ve popped it in here because no stroll around the lake is complete without an ice cream from Kem Ho Tay. 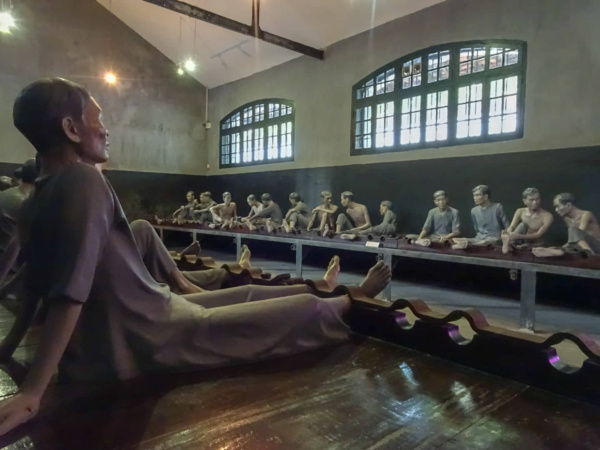 Hoa Lo must these poor guys have felt?

The “Hanoi Hilton” as it was ironically known by the American POW’s it housed during the Vietnam war is another fascinating, but chilling reminder of the countries war-torn history. US Senator John Mcain was interned here during the war. A total must see if you’re a history buff. 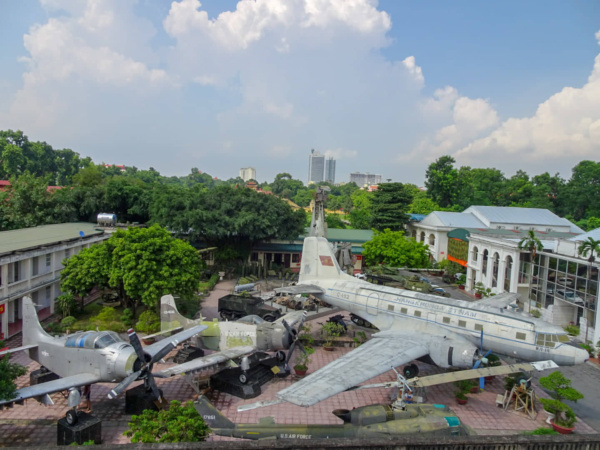 Closed Monday’s and Fridays but open every other day from 8 am -11.30 am & 1 pm – 4.30pm, the Vietnam Military Museum contains war remnants, propaganda and historical documents from all of Vietnam’s military conflicts from wars with China, France the USA and so on. 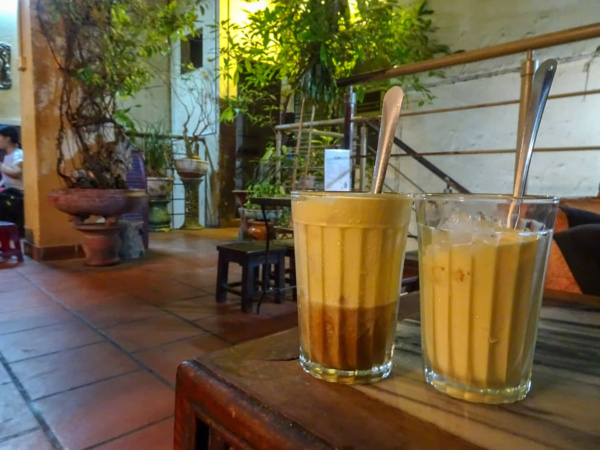 Famous Egg Coffee is run by Tri Hoa Nguyen, the son of Nguyen Giang the original creator who came up with the concept in 1946 during a milk shortage due to the French War.

Travel anywhere across Vietnam and see egg coffee advertised as a local speciality, but here is where it all began.

We’ve been off meat for a while now, for various (mostly moral reasons), so that hugely affects our food choices while travelling. Vietnam, in general, has been quite easy from that point of view, there’s nearly always a veggie option, owing largely to a big Buddhist population.

In saying that Hanoi was like Veggie heaven! so many options, so we thought we’d throw a section in here for our leaf-eating readers! Although I can guarantee you even if you’re a carnivore, you’ll enjoy a meal in any of these smashing eateries!! 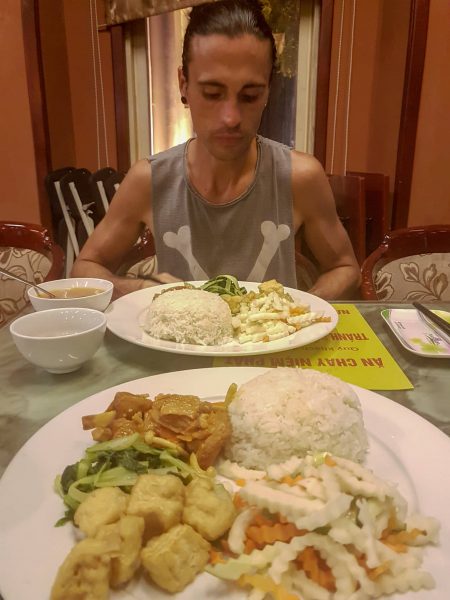 No animals were harmed in the making of this meal / photo

Follow directions on Google or MapsMe that will bring you to the CDC Home Design Centre. Beside the centre is a small seating area next to a laneway, Banh Goi Chay is down the lane on the left. Follow the signs.

Not far from Hoa Lo Prison so it is an ideal place for lunch.

30,000 VND (€1.15) buffet. Buddhist restaurant outside the city, close to the West Lake we decided to pop in for lunch when visiting the lake one morning. Arrive before 2 pm to have the best selection of dishes.

Open 24 hours depending on the stall.

So there you go, guys! Why not spend a couple of days in Hanoi. It’s beautiful, and better again it’s easy on the pocket (you can tell I’m in charge of the budget).

Why not take a gander at our Hanoi Instagram highlights here if you fancy a giggle.

If there’s anything we can do or if you’ve any questions, you know where to find us. In the meantime…