Known primarily for its amazingly well preserved old town and for being an architectural and cultural melting pot, Hoi An firmly planted itself on the Vietnamese backpacker trail as well as our Itinerary.

We were lucky enough to catch not one but two local festivals during our short stop in the “Peaceful Meeting Place” (that’s what it means you see) read on for the who, what, how etc…

From Da Nang To Hoi An:

The infamous local yellow bus No.1 loops Da Nang city before crossing over the colorful Tran Thi Ly Bridge and onward to Hoi An.

The reason why we call the infamous No.1 is that the bus assistants tend to scam foreigners. A lot. According to the official Danang Bus website, tickets to Hoi An cost only 18,000 VND (€0.68). But, like anywhere really, there is an unofficial foreigner rate, in this case that rate is 25,000 VND (€0.95) however the assistants and drivers now claim it is 50,000 VND (€1.90). Total bullshit.

First they will claim that the 25,000 VND is an old price (screenshot the website and show it to them) secondly they will tell you it is extra for bags, it isn’t as there is plenty of room so your bags won’t take up any seats.

Thirdly they will refuse to take your 25,000 VND in a last ditch stubborn attempt. After some stubborn acts of our own, we whipped out the phone and began recording, we then translated that we know the price is 25,000 and that is all we will pay.

He reluctantly accepted it and the whole debate was laid to rest. While this may seem like a battle over pennies it’s not the money, it is a matter of principle. If all us tourists refuse to be taken advantage of, they will stop preying on us through bullshit and intimidation tactics. Who is to say that in a few months that ridiculous 50,000 rate won’t jump higher all because they got away with it?

Stand your ground and do your research. Remember to visit Danangbus.vn and screenshot the official ticket price.

Accommodation In Hoi An:

We got super lucky with our accommodation, not only was the Petunia Garden Homestay cheaper than it normally is (even though there were two festivals on when we were there), but it was also home to a craaazy lady, who mammied us, constantly giving us fruit, water and ginger tea, spoke to us in Vietnamese as if we understood every word and made the BEST banana pancakes in the world.

We bagged a double room with air-con and a private bath for 200,000 VND (€8) a night. Super comfy, staffs were amazing and you can rent push bikes from mom for a nice jaunt around town. You can book here, and we highly recommend you do.

Things To Do In Hoi An: 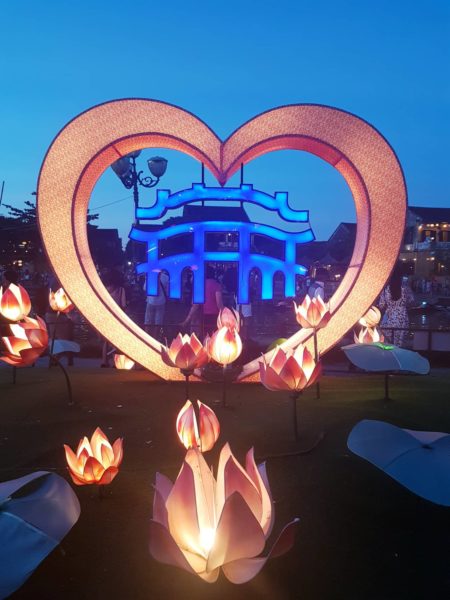 Once a month on the night of the full moon tourists flock to Hoi An to take part in the Lantern festival by releasing paper lanterns and boat loads of tourists onto the Thu Bon River. Unfortunately, while this is an absolutely beautiful thing to see, it wreaks total havoc on the river leaving a serious amount of waste in its wake and considering they do it every month for us gringos that’s a serious amount of crap. 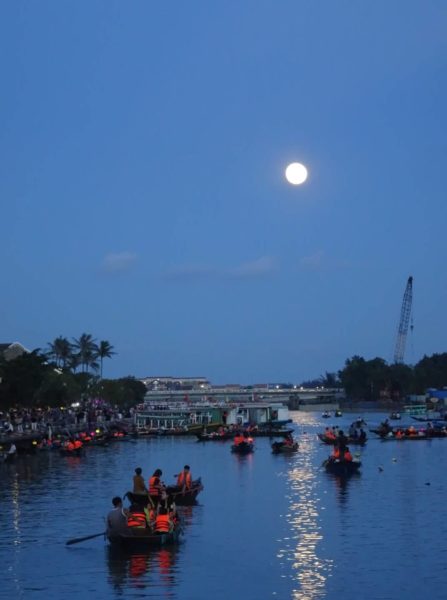 The “real” latern festival is celebrated only twice a year. When we say “real” we mean the one observed by locals as an actual tradition, as opposed to a way to make some dolla dolla bills, which is what is seems to have become. Think paddys day with candles.

The lanterns are released between 8pm-10pm from near the covered Japanese bridge in the old town. Be warned it’s chaos so bring your crowd control elbows with you. 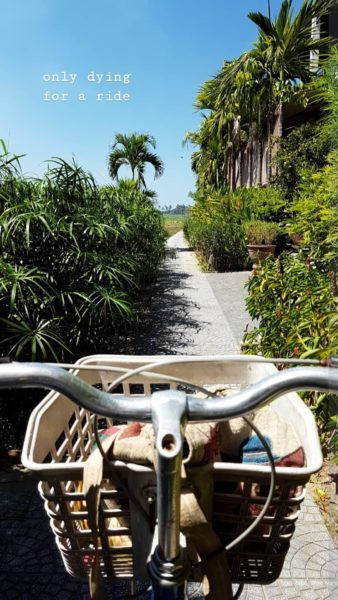 The Village (by) Bike

Rent yourself a push bike from your guesthouse, you could rent a moped but Hoi An is tiny and really pretty, so save yourself some cash and work them glutes!! We rented our bikes from Petunia Garden and took off for the day to see the town and the surrounding area; 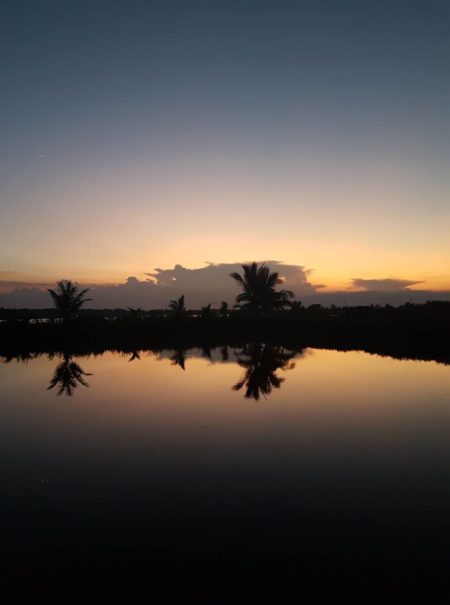 Tra Que organic vegetable village is an island village between old town Hoi An and the beaches that is famous for producing super high quality organic vegetables and spices using traditional farming methods.

Interestingly the farmers don’t use any fertilizers or chemicals, instead they only use a type of algae that can only be found in the lagoons on the island apparently. 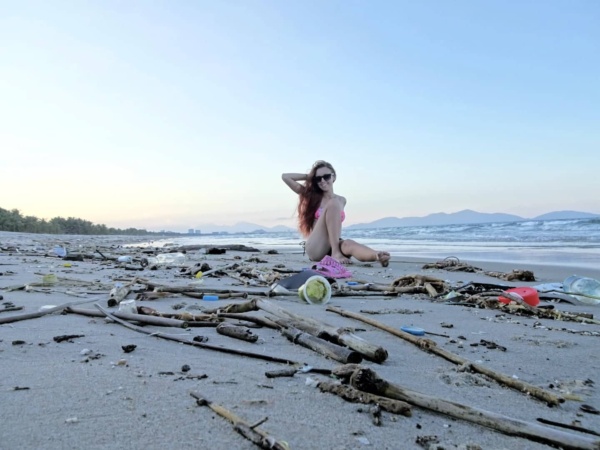 Life’s A Beach, But Hope fully Not This One!

To be honest An Banh Beach had to be seen to be believed, and not in a good way. Although it’s touted as one of the top 10 most beautiful beaches in Vietnam, and we say this as our own opinion with all the Irish-ness we can muster, it’s an absolute and total f$#kin’ kip lads.

Debris from China washes up on the shore here faster than a small nuclear explosion could clear it, and we’re talking actual rubbish here, syringes, shoes, styrofoam, all the good stuff.

When you get out there you’ll have locals yelling at you that you can’t go any further than where they are, but thankfully they have free parking… as long as you rent sunbeds and buy drinks from them. Scam!

Now to be fair, we were at the northern end of the beach and have since been told that not all of the beach is like this, apparently the beach front to the south end near the resort’s is cleaner, but we would imagine you probably need to buy drinks or rent a bed in order to use them.

So while the cycle out was beautiful the end result, to us, left a lot to be desired. Do yourself a favour and spend more time at Tra Que village. Maybe grab a bite to eat.

Pretty much exactly what is says on the tin. A really, really old house, built in the traditional style of Hoi An and the interior remains unchanged for about 250 years (Although it’s a shop now and a house). There’s a 35,000 VND (€1.30) entry fee if you fancy having a nose MTV cribs style. 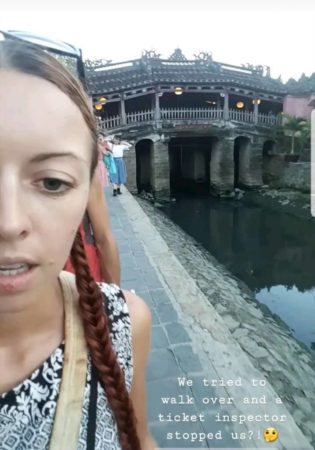 More a description than a name really!

Another imaginatively named attraction. Its a Japanese, pagoda style bridge, and it’s got a roof (apparently a gift from Japan to Hoi An for some reason). There’s a 2000 VND (€0.07) charge to cross the bridge from the side where the lanterns are launched but if you wander around the town and approach from the opposite side of the bridge there’s no fee, also, it’s only 7 cent. 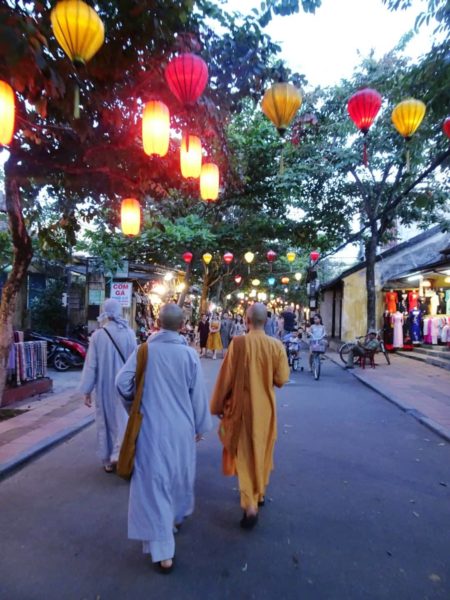 Nuns On The Run!

Unfortunately this is only a “to do” if you happen to be in Hoi An on the 15th day of the 8th month of the Lunar calendar (so…September-ish but maybe google it for an exact date). The Mid Autumn Festival sees throngs of children and teens dressed as Chinese dragons performing Dragon dances for local businesses as a way to ward off evil spirits and bring good luck and prosperity.

You will come across teams or crews of teens that will bump into each other and battle dance in the street. At 9pm there is a Professional Dragon dance (with older teens) that draws a large local crowd on Phan Chau Trinh Street outside the “Hello Taco” restaurant. Get there early if you can and get high up. There will be a LOT of people when this thing kicks off. 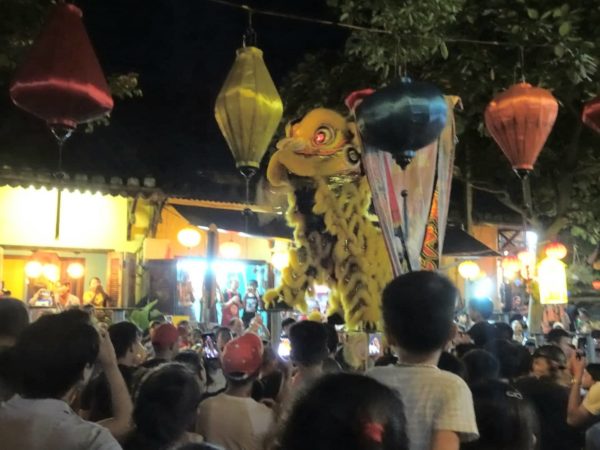 We we’re really lucky to be here for this, in fact it was the highlight of Hoi An for us.

Close to the Japanese Bridge in old town. This buffet style veggie restaurant serves dishes starting at a wallet friendly 10,000 VND (€0.38). Its open until 8pm but at those prices it’s, not surprisingly, very popular so arrive early for the best selection.

You’ll find this little gem on Phan Chau Trinh street. Its very popular and rightly so as it serves some of the best Banh Mi we have tasted including a vegetarian option with tofu for 20,000 VND (€0.75).

Simple local eatery with only four dishes on the menu, veggie rice chicken, veggie Cao Lau (so good!!), veggie noodles and Banh Cuon Chay (you guessed it, veggie!). They open until 8pm, and dishes cost 30,000 VND (€1.15).

We hope you enjoy your time in Hoi An and that our little guide has been of some help! If you need a little more Ungraceful in your life or just wanna see more of Hoi An, you can check out the visual tour in our Hoi An Insta-highlights here.

As always, hit us up if you have any comments or questions, we love to hear from you guys. In the meantime…