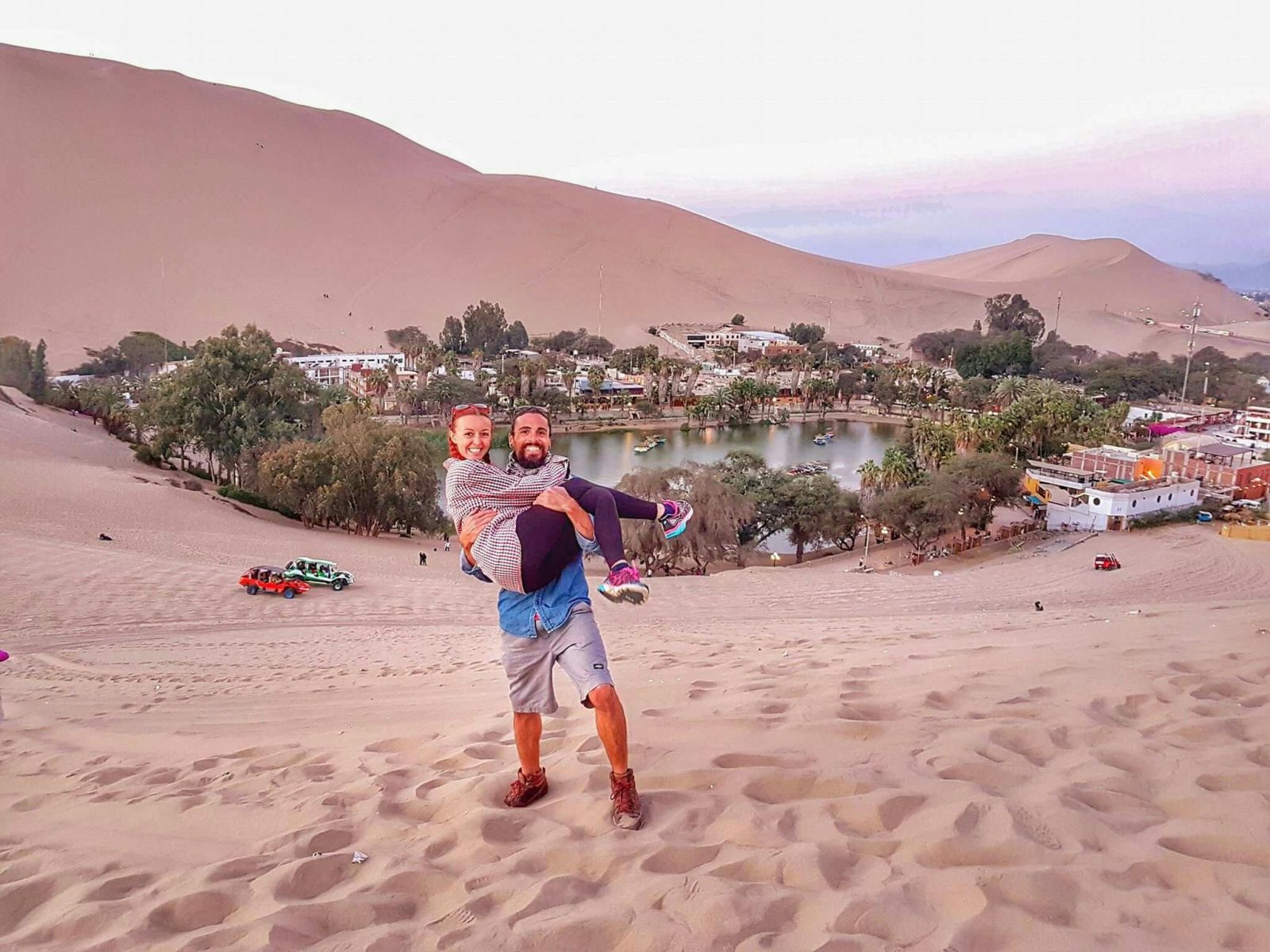 For thrill seekers like us a stop in Ica, a small, rustic city that sits in between the Peruvian desert, and the sunny coast was the perfect base for sandboarding, sand buggies and choppy boat rides to, Peru’s answer to the Galapagos, Paracas National Park.

Sitting along the gringo trail, Ica is a usual hotspot for visitors after a jaunt in the city of Lima and before exploring Cusco and it’s sacred valley.

According to the many of the backpackers we’ve met, the norm is to spend a night or two in Paracas and then travel onward to, the artifical, but still impressive oasis town of Huacachina.

After arriving in Huacachina we quickly discovered that it’s a far cheaper and more convienant option to base yourself in Ica and venture from here to accomplish tasks in both Huacachina and Paracas.

The only drawback for this little hack being that accomodations in Ica generally don’t have kitchens. You will however find several restaurants close by serving the “menu del dia” for about 6-8 Sol (€1.50-2.00) which is fine if your only going to stay a night or two. 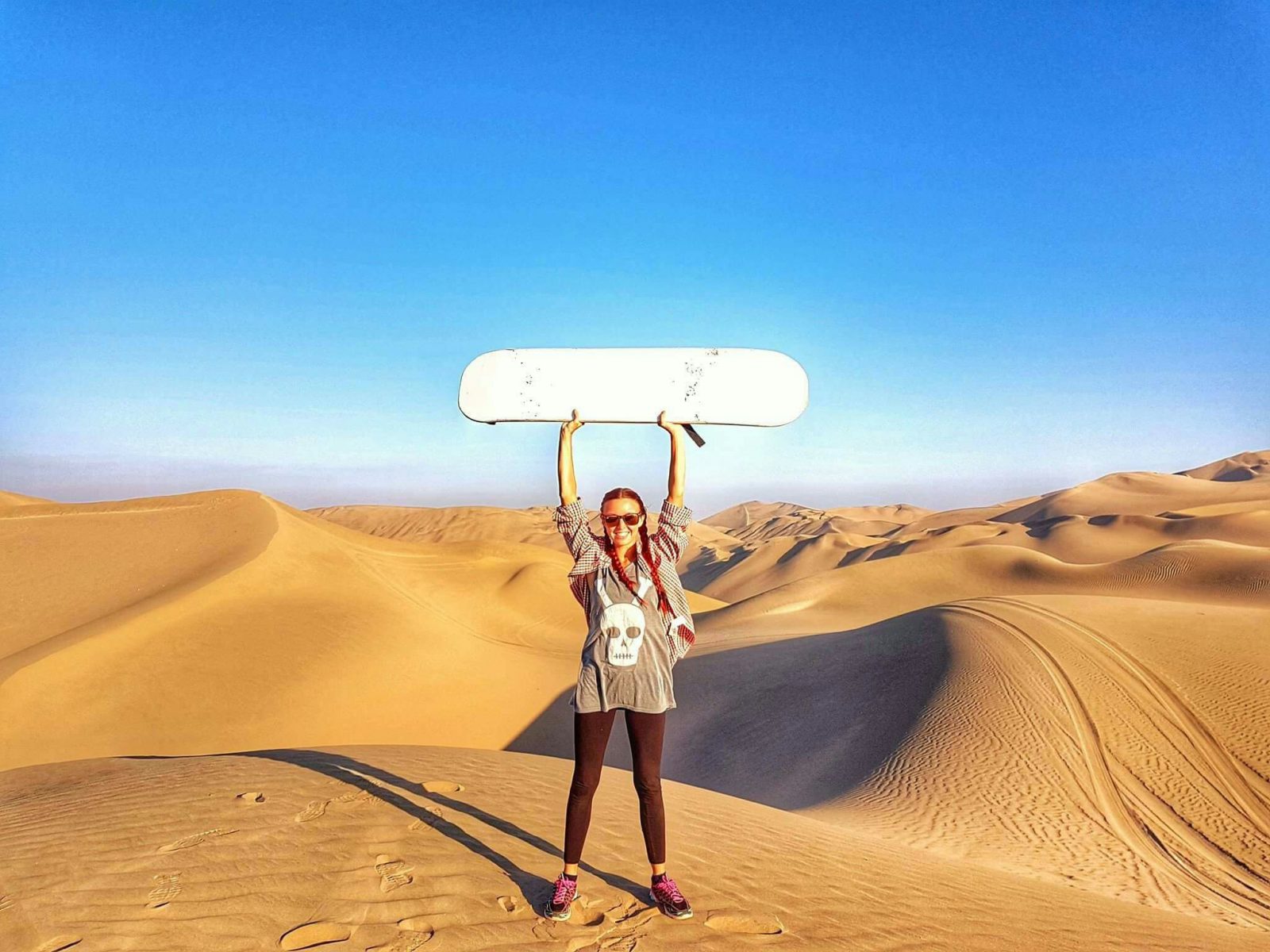 From Lima to Ica:

There are a surprisingly limited number of busses servicing this route. They charge a flat fee of 20 sol (€5) and leave quite regularly. They’re not direct busses (they make a few stops along the way) so it takes around 4/5 hours.

Located on Calle Javier Prado Este #1109.
Take metro line to the  Javier Prado stop, exit the metro and take a left, walk to the bottom of the street and take a right and you’ll see bus station. From here busses leave every hour on the half hour.

We paid 40 sol (€10) per person. You can pre-book on BusBud.com, but we just rocked up as per usual, which allowed us to pick the cheapest journey.

On the bus we were given a small snack pack (a little cake and a basic roll with ham and cheese), a choice of drink between Coca cola, Inca cola or water and later a hot drink, coffee or tea. Each seat had its own tv with movies and headphones (in Spanish) it was like being on a plane. The air con was blaring though, so bring a jumper.

The only other company we found going to Ica was Transmar. Across the road from Cruz del Sur, on the same street, Javier Prado.

They had the same timetable and prices so we opted for Cruz del Sur because they’re generally a more luxurious line and there was, for once, no difference in price.

Note: When you get to Ica!

Exit terminal in Ica and head right to the main road, and then turn left, after 3 blocks you should come to the square. Don’t go left when you exit terminal. We were warned it’s very dangerous by a taxi man who wasn’t actually trying to get us into his cab.

As we didnt really know anything about Ica we went to old faithful Booking.com and stayed at the Dunas de Ica Apartments, on Calle Carlos Belli Mz. 10B lote 4, Urbanización San Miguel,  Ica, Peru . At €40 (150 sol) for 3 nights it wasn’t the cheapest place we’ve stayed, but the shower was hot, the bed was comfy, they have a kitchen area (although really it was a microwave and a rice cooker but I’ve dealt with worse) and really, what more can you ask for?

I would suggest you do a bit of shopping around as we did see matrimonial rooms advertised for 30 Sol (€8) per night and singles from 25 Sol (€6.50), and hey, every little helps right?

Note: the best market in Ica is el Mercado Mayorista Arenales. Its a massive food market, good and cheap. 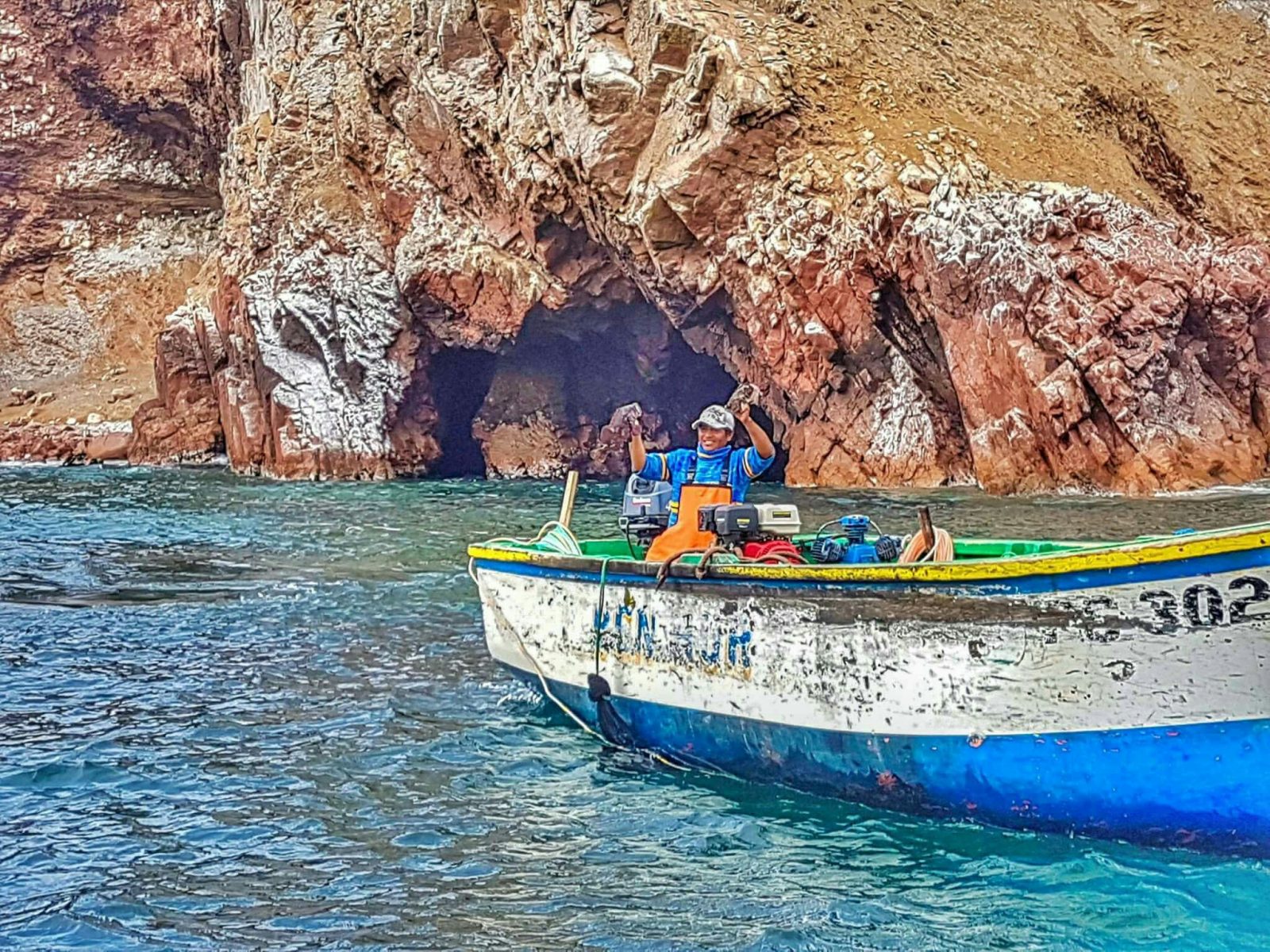 At least someone looks happy to be on a boat…

On the main road as you head towards the Plaza de Armas from the hostel you’ll see a tour agency on your left hand side. This was the cheapest tour we found for the Ballestas Tour.  Coming in at the very reasonable price of 40 Sol (€10) per person, it includes pickup from your hostel, a boat to the Isletas, guide, and a bus to the national park.

A couple of things to note:

There is a compulsory  15 sol (€4) port fee paid on arrival and a 5 Sol (€1.30) entry fee to the park. Some of the tour agencies won’t tell you about this, but everyone has to pay and they are official charges.

We were picked up at our hostel at 7am. It takes an hour to get from Ica to Paracas. The minute we arrived we used the toilets for 1 sol, paid our fees and boarded our boat.

Unfortunately you HAVE to book a tour to visit the islands, there is no way to DIY it. The tour itself takes about 40 minutes to reach the islands, passing the ancient and mysterious Candelabra on the way (I’ve said it before…ALIENS). 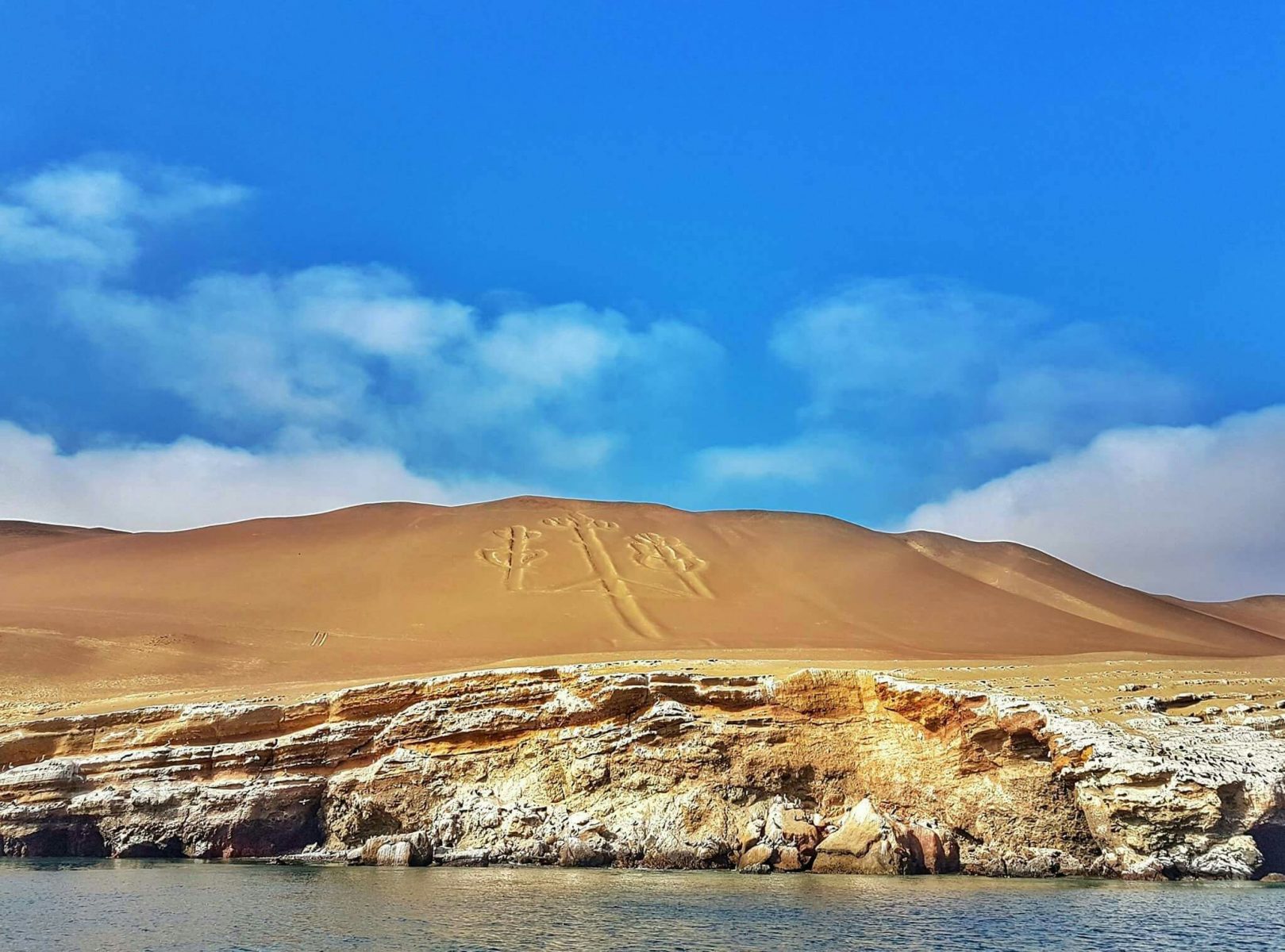 You’re not allowed off the boat to explore the rocky islands but this is a good thing in our eyes, as you wouldn’t want to disturb the local fauna, penguins, sea lions (although they’re known as sea wolves here “lobo del mar”) and blue footed boobies. 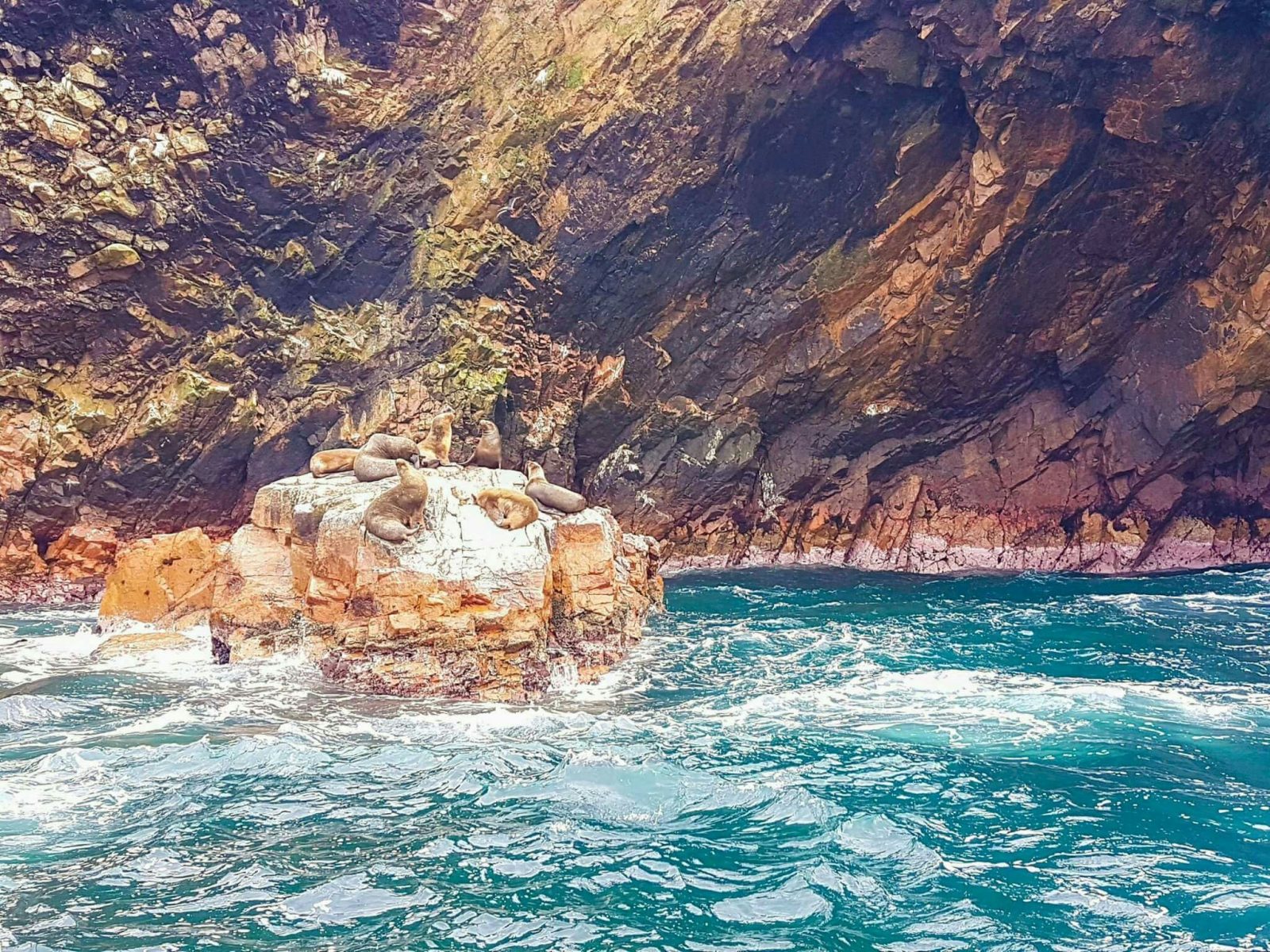 A wolf in wetsuit clothing??

You’ll float in the boat for just under two hours observing the wildlife but beware, there thousands of birds flying above and covering every rock you can see, this looks cool but exponentially increases the possibility that you could get poo on your head. Really… bring a hat.

Our float was cut a little short due to a random sea storm. We were a little dissapointed until the Miami vice style adventure kicked in. Swerving left, making drastic right turns crouching under a plastic tarp (again) and getting drenched provided so many laughs.

5 km from Paracas lies the only Marine national park in Peru. At one stage, about 50 million years ago, this park was all under really deep ocean. This has been confirmed, according to our guide, by the discovery of whale skull belonging to a whale that was 60 ft long, shark and megalodon (giant prehistoric shark) teeth and remains.

Also discovered in the region were deformed, elongated skulls. Theorists say the deformities were caused at birth, Paracas people would strap wood and string to babies skulls. This defined your place within society, the more elongated the skull the higher class you were. Bones wrapped in gold thread were also found in the tombs.

Paracas comes from two Quecha (sp) words, “sand rain / rain of sand”, which is ironic as thats all there is in this region. It look like the desert os trying to take the land back. The closest geographical landscape to this region is the moon, from the colours and the craters etc. 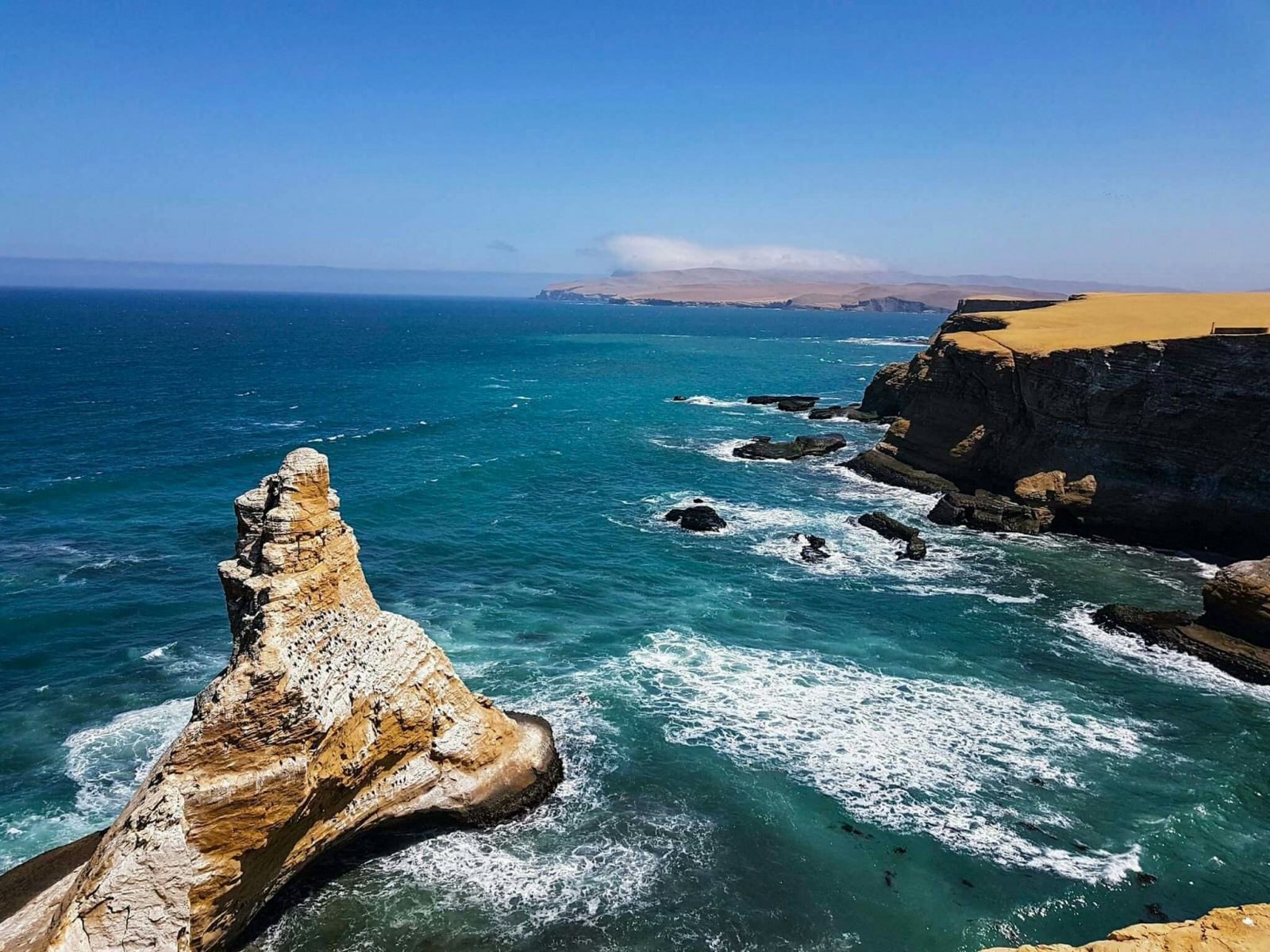 Take me to church

Our first stop on the whirlwind tour was La Catedral. A rock formation that looks like a cathedral, the monolith has taken a little bit of a beating from earthquakes and tidal waves but is still more or less intact. 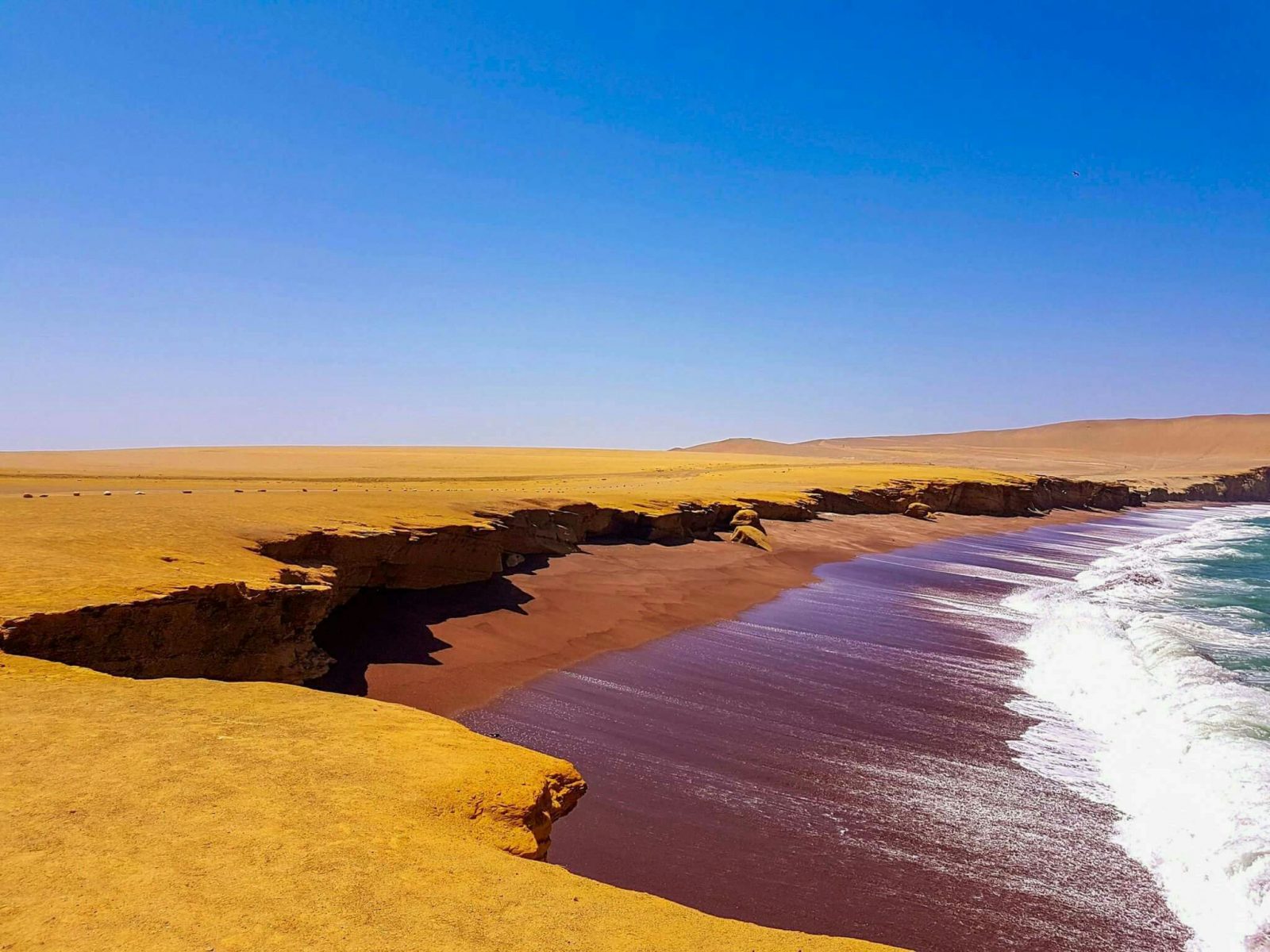 It’s a beach Jim, but not as we know it.

This is by far the most unique beach in Peru, a red sand coastline brazenly separates yellow stone cliffs and choppy turquoise seas.

The cliffs from which this photo was taken are comprised of red volcanic rock. The tide erodes the red rock and carries the “sand” onto the waiting coastline. Spectacular no?

Theres a two hour stop at a small fishing village where you will find restaurants and beach.

This is the part unfortunately where you get herded into one of the restaurants (you’re company will no doubt have a deal going with one) with the rest of the gringo wallets. Most of the places offer free pisco sour to get you in the door. The food did look delicious but with menus starting around 40 Sol (€10) for shared dishes it was a no foe us I’m afraid. When we went to walk away however we were offered the economic 2 x course meal for 20 sol (€5) with the guarantee of “If you dont like it you don’t pay”. We suggest bringing a packed lunch and enjoying it on the beach.

Along the left hand side of the Plaza de Armas if you’re coming from our hostel is where you’ll find all the tour agencies. We used Las Cataratas del Iguazu ask for Senora Gloria. They were a good, reliable company. No hidden costs, open to a haggle and we got exactly what we paid for. 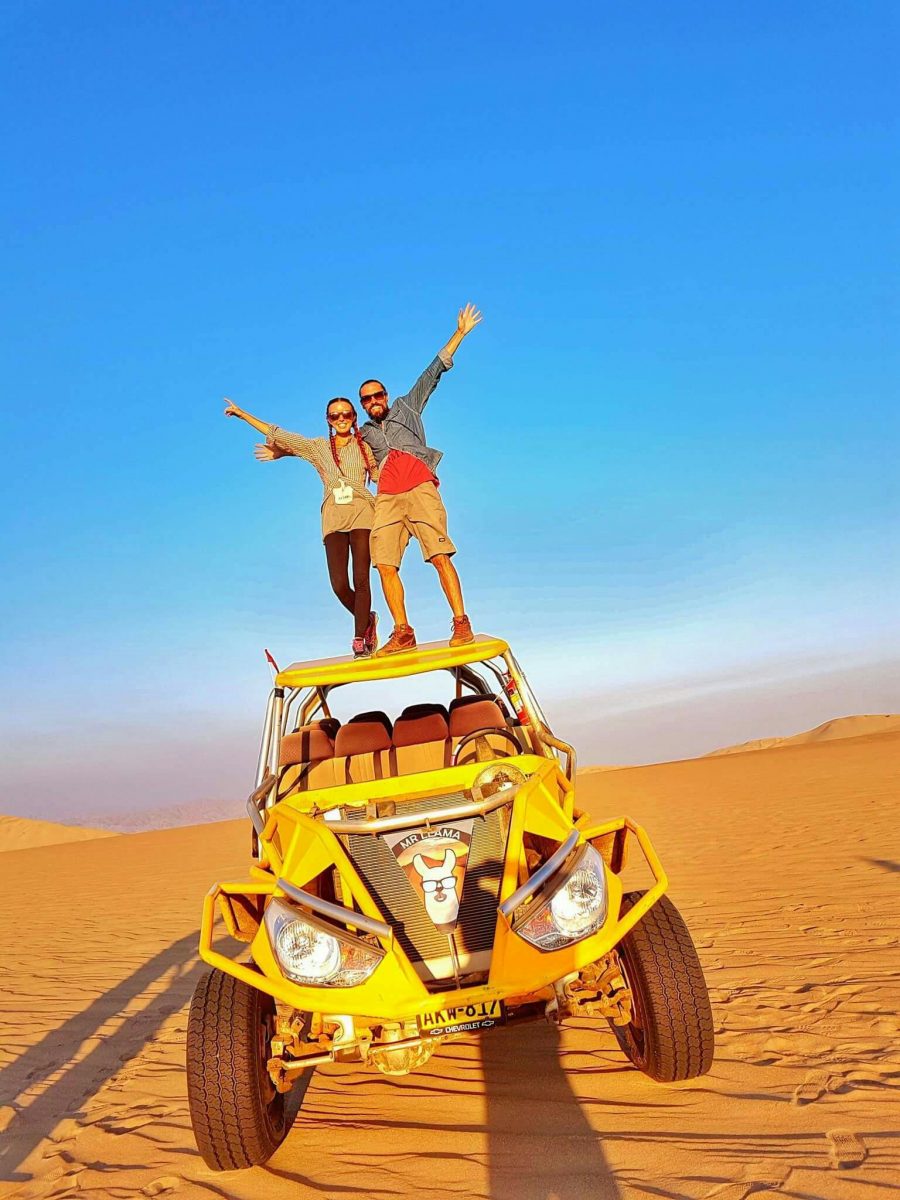 The 4pm sandboarding tour cost 40 sol pp (€10). The tour itself is with a company called Mr Llama in Huanachina and they were fantastic!! Probably the best tour company we’ve been with. Included in oir tour was transport to Huacachina, one hour on the sand buggie (so.much.fun) and one hour of sandboarding, photo opportunities standing on the roof of the buggy (thanks Mr. Llama) and ending with watching the beautiful panoramic sunset from dunes. 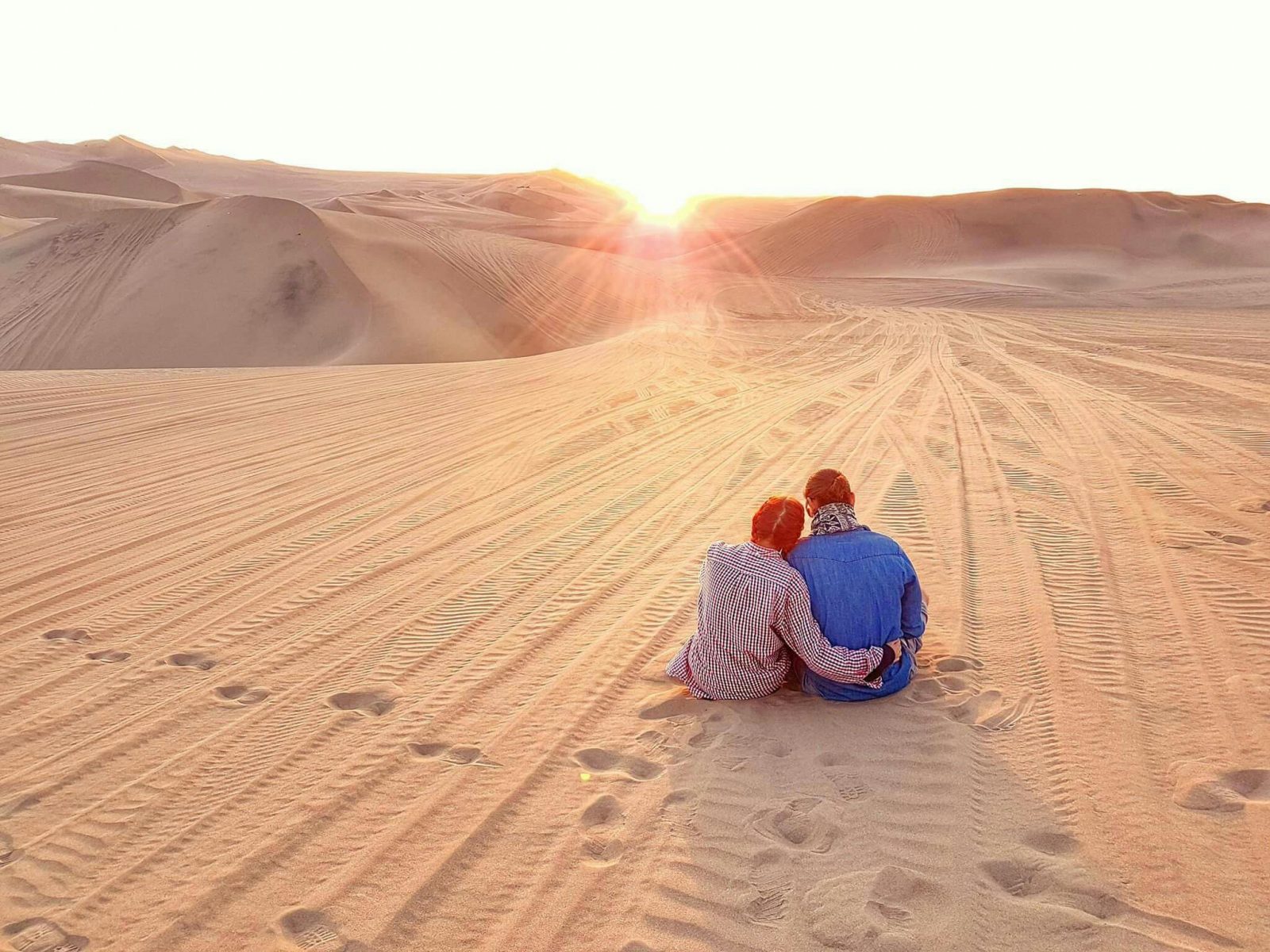 Don’t let the sun go down on me

There are tours at the same price that start around 10am, bringing you around the city of Ica, onto Cachiche and ending with sand boarding but you only get one hour on the dunes total due to heat.

Might be of interest to some of you earlybirds, just wasn’t for us. Ica and Cachiche can both be visited DIY without the need for a tour (we stayed in Ica so didn’t make sense for us) and we wanted two hours on the dunes (not in the midday heat), one hour wouldn’t be enough. Plus! A sunset, If you know us at all you know thats a deal maker right there!!

You meet at the tour agency at 3pm (or before) and they’ll pop you in a taxi to Huacachina. It’s about a 15 minute drive.

Feel free to get there early and have a wander around. Huacachina is a cool little town, but you’ll see it all in an hour and if you do decide to grab a beer or some grub be prepared… It’s One of the most expensive towns we’ve seen so far. Some places were charging $15 for lunch!

Find your guide and buggy (they’re all in the same place, where the taxi dropped you off) and youre good to go. Once you’re all strapped in (and make sure you are!!) You set off in what is basically a rollercoaster with no tracks. After a hair-raising, stomach-churning, ass-bruising half hour in the dune buggy you will stop at a “small dune” for a sandboarding practice run on your belly. You’ll go twice on this hill and then you move onto one that is four times bigger. FOUR. So much fun!

This is followed by another 15 minutes on the dunes before stopping to watch the sunset. Here the driver will take many photos for you. There is then a final spin to a lookout point where you can take some snaps of the Oasis and Huacachina. Pretty cool!

There is no ATM in Huacachina. They do not do cash back. BRING MONEY.

Bring a jacket. It gets so cold, and  I mean FREEZING as soon as the sun goes down.

I hope you found this somewhat helpful and as always, if you need anymore info or have any additional questions sure gimme a shout and I’ll help if I can.