Ah Lake Atitlán, it’s like the liquorice all sorts of Guatemala, there’s something there for everyone.

There are numerous towns on the lake all easily accessible from each other by Lancha (speedboat) for a fee, and each little town has a rep for catering to a particular kind of traveller, which is what makes Atitlán such a special place.

There’s San Pedro, for the budget backpackers and party animals, San Marcos for those in search of a more spiritual experience (or dreadlocks), San Juan for fancy hotels and restaurants or Panajachel, which has a beautiful sunset and is the main port and gateway to the rest (just not as nice).

Each holds its own style and charm, but only one holds our hearts, The fabulous San Pedro del la Laguna. We originally had planned to do loads here at the lake, but in the end we arrived, without realising, the day before St. Paddy’s Day and of course there was a massive Paddy’s day celebration planned. We bumped into a shed load of Irish people, and our couple of activity filled days turned into a few days on the absolute piss and a couple of days hungover in hammocks in the sun. But sure it’s nice to let off a bit of steam every now and again also, so we embraced these days as a part of the experience, and well… who wants to scale a volcano with the mother of all hangovers?

I highly recommend you put Lake Atitlán VERY high on your Guatemalan to do list, you won’t regret it.

Travel from Antigua to Lake Atitlán :

You can make your way to Panajachel and get a lancha from there to your desired destination. We wanted to head straight to San Pedro from Antigua and there’s numerous tour agencies that offer a shuttle that goes through Panajachel to San Pedro for 70 quetzal (€8.50) so that was the lad for us! It’s a 6am pick up and a beautifully scenic 3.5 hr drive… honestly, have the camera ready.

It’s worth noting that, as most times in Central America, there’s no need to book accommodation in advance as there’s a load of hostels available and you can always haggle for a better deal.

Walk from the dock and take the first left, follow the main road right into the town. You’ll pass Hostel Domingo or Posada Monte Rosa Hotel – both have good rates. 70 Quetzal (€8.50) a night. Although in Posada monte Rosa, the lady closes and locks the door at 11pm which is a touch inconvenient, if like us you only go out to eat at about 10pm. 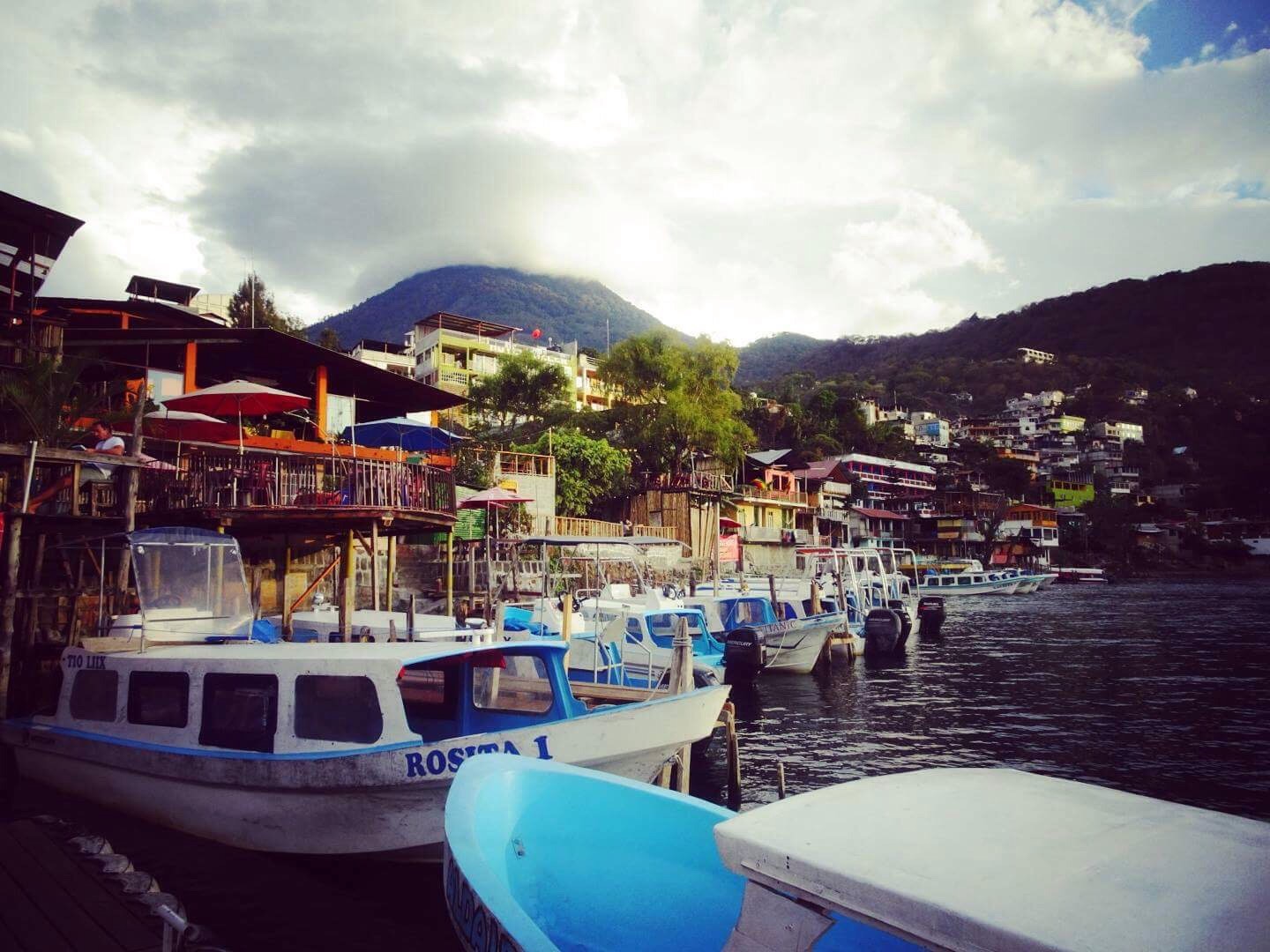 Ah the Town of St. Peter on the eve of St. Patrick.

We stayed in the Casa Rolando at 50 quetzal (€6) per night for a private with its own bath. It’s a cheaper, quieter option for those who want the Hostel Fe (75 quetzal/ €9 per night for a private) party vibe but also the option to abandon the madness in favour of sleep. There’s no need to pay more than 50 Quetzal for a room because there’s an abundance of hostels all competing for business, so haggle, haggle, haggle!!

Things To Do in Lake Atitlán:

Watch the sunset from the pier:

Panajachel has the most beautiful sunset of all the little towns. I know, I know, there should be a picture… but sometimes you just gotta put down the camera and enjoy the moment, otherwise what’s the point!

Katie, on the other hand, was snapping away. So here’s your picture: 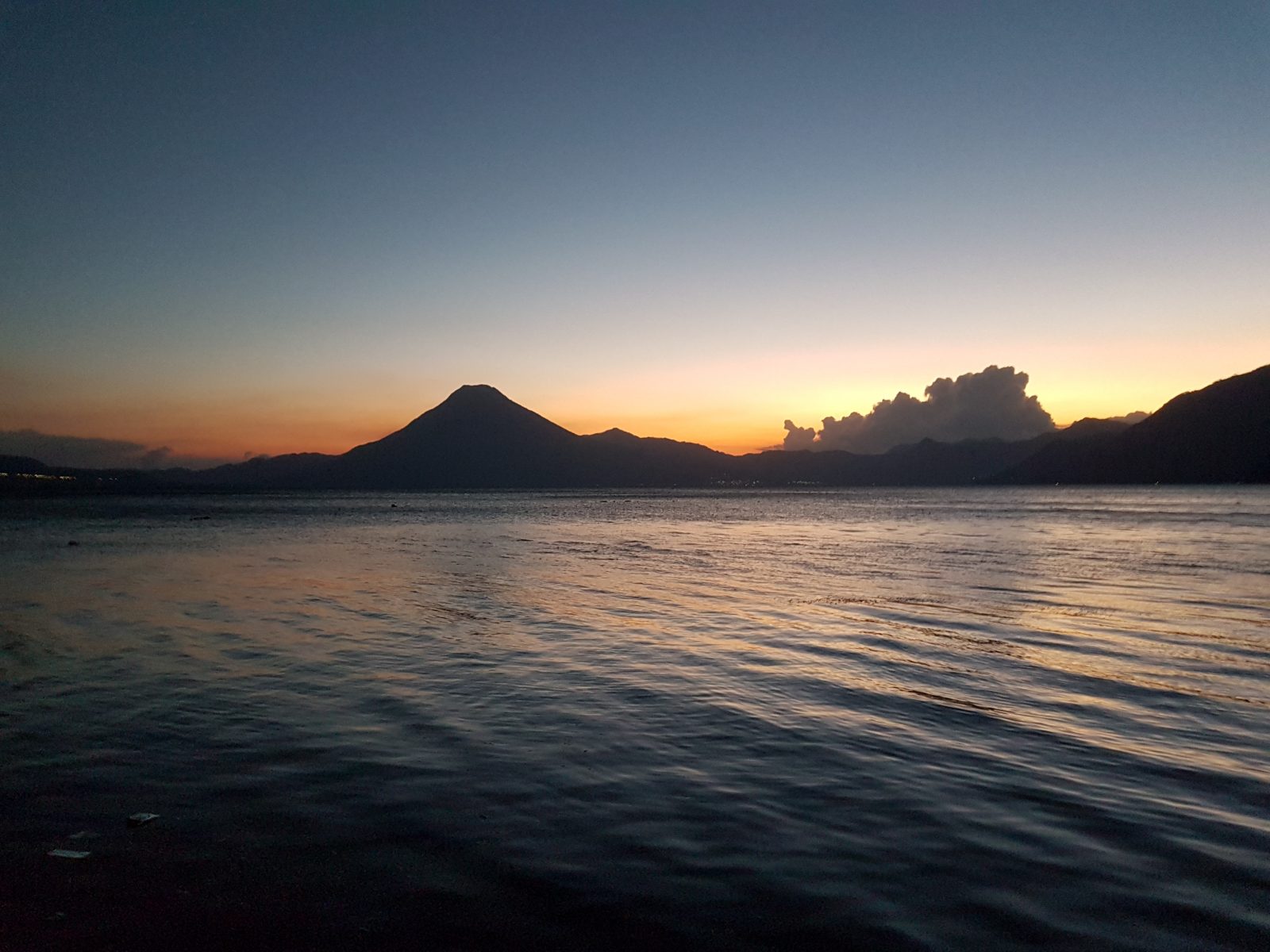 Have a pint in The Wild Rover: 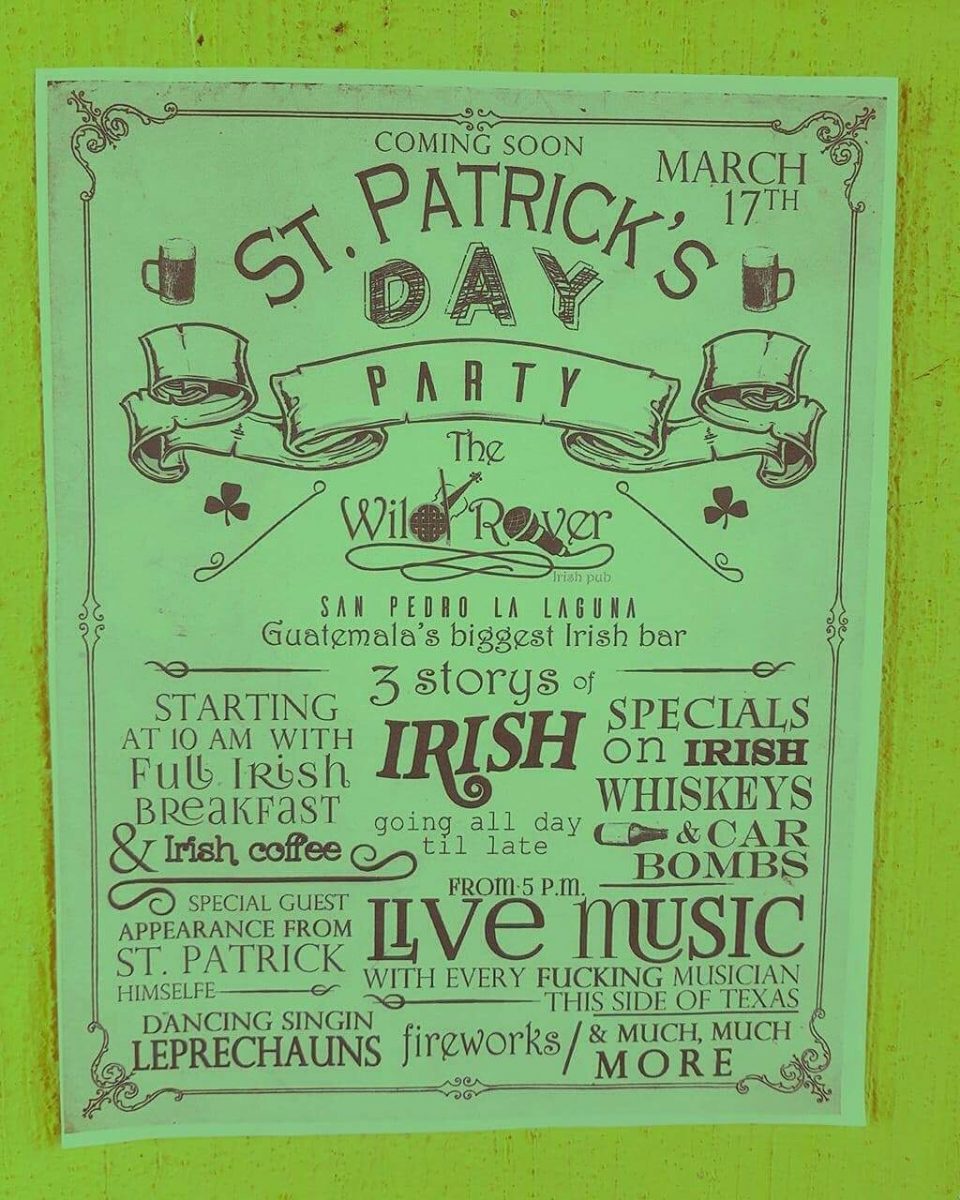 Sure what could possibly go wrong?

That’s right, San Pedro has an Irish bar, run by a proper Irish lad by the name of Paul. Pop in for a pint of Guinness or a Chin wag, I’m sure he’d love to see you.

Go to a quiz night in Hostel Fe:

The quiz night in Hostel Fe is epic!! Apart from a $200 cash prize (which might as well be a couple of thousand in Guatemala) for the winner. It features a heavy dose of banter and some banging tunes, with plenty of drinks promos to keep the evening moving fluidly (get it??)

Eat breakfast at The Blue Parrot:

After a night in the Rover or Fe, nothing will sort you out quicker than a beauty of a (sort of) fry up in the blue parrot. And at 25q (€3) sure you can’t go wrong.

At this point, if you’re not all volcanoed out, why not brave all 9,000ft of the impressive Indian’s nose. Stunning views and a bout of breathlessness await.

There are a staggering amount of bands in this tiny little town, but head and shoulders above the rest are the non-stop rocking Sonido Abusivo. We watched their full set twice and still wanted more. DO NOT go to San Pedro without seeing them.

Walk/bike between the towns (carefully):

There are walking/biking trails between (most) of the towns. Apparently they are quite amazing, but speak to a local first as they are a bit isolated and there have been instances of muggings. The usual rule applies… head on a swivel and don’t bring anything you aren’t prepared to lose.

Have a quesadilla at Super Tacos la Mexicana:

Split a brunch at the Barrio pub:

The Barrio does an amazing 3/4 course brunch for 49 Quetzal which is a little on the pricey side for Guatemala.. (well it’s under €6) but they’re sound and they let me and Katie split one, for this reason alone I’d go back. Now tack on the fact that it was sooooooo good. And has free tea/coffee with it. Deal.

Unfortunately we didn’t make it to San Marcos, (damn you St. Paddy’s day) but this apparently is the place to go for yoga, meditation and spiritualist retreats. The people we spoke to who made it there had nothing but good things to say.

Again, we missed out here due to the patron saint of being hungover, but there are some beautiful scenic walks between San Pedro and here. Also apparently when you get there this town is the most Original G of all the towns. Remaining largely untouched by tourism, San Juan will give you a glimpse into old school Guatemalan life. 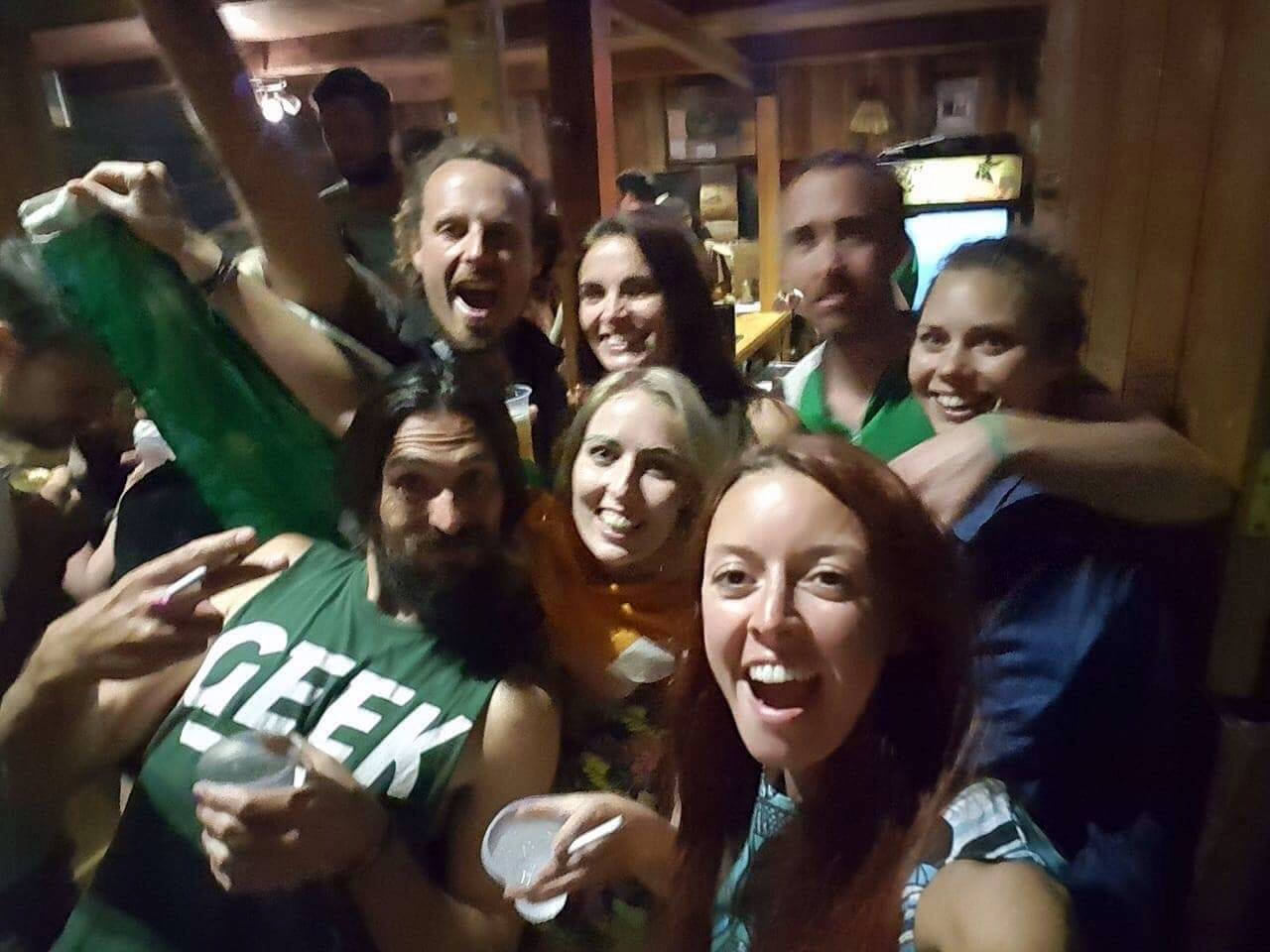 Damn you St. Paddy’s day, but you were totally worth it.

How To Travel Between The Towns:

There’s a lancha service that operates between the towns. There’s no real timetable as such, the lanchas tend to leave when they’re full, could be on time, could be on Central American time. Strap your patience on and take in the surrounding beauty. Prices range from 25q to 50q (€3-6) depending on origin and destination.

So there you have it. Lake Atitlán for me was one of THE highlights in Guatemala, and not just because we got very, very drunk and then lay in a hammock by a stunning clear water lake. Although I can think of worse ways to spend Paddy’s weekend.

As always, should you need more info or more detail, drop me a message and I’ll be glad to oblige. Peace out.