Stop number one in a new country is always an important one. What’s the expression? “you don’t get a second chance at a first impression”. Lucky for us Langkawi “The Jewel of Kedah” made a spectacular first impression, and assured us that our time in Malaysia would be adventurous and funfilled!

Maybe it had something to do with the fact that we crossed her sun-kissed hills and fields on two wheels with the wind in our hair, freedom in our lungs and bugs in our teeth.

Not an experienced rider? No problem. This is the perfect place to learn/practice, the roads are in really good condition, there’s not much traffic and the island mentality means the drivers that are there are really patient. Just make sure to wear a helmet for Jaysis sake.

Another massive plus to renting a bike on Langkawi is that there’s no public transport on the island, so if you’re looking to get around and see the sights it’s the best option. Alternatively, taxis offer a fixed price service. If you have the chance to befriend a driver, do and take his number. He’ll look after you very well. Alternatively, download both the Wifi@Unifi and Grab apps to literally grab taxis at cheaper rates than the fixed prices.

The best time to befriend a taxi driver is on your initial arrival at the ferry port. The ferry lands in at Kuah Jetty, and as previously mentioned there’s no public transport.

The area where the majority of the hostels and backpacker facilities are is on Cenang beach which is a 30-minute drive from the ferry port, so you’ll be stuck negotiating with the local taxi drivers. If you have a local sim you could call a GRAB and save yourself some dollar. 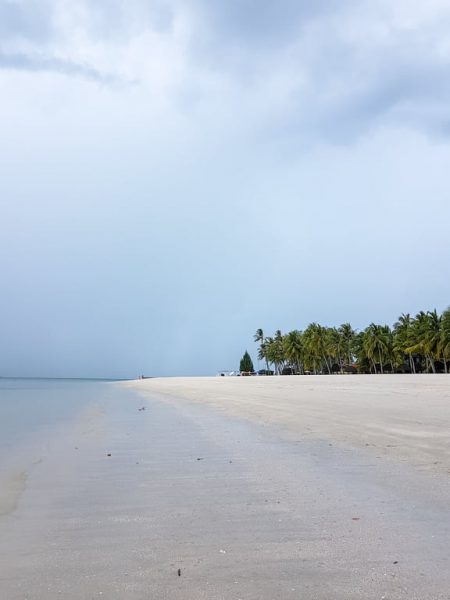 Alternatively when you exit the terminal turn to your left and the food hall at the end of the row of shops has free WIFI and outdoor plugs (SCORE!!).

So when you’re all settled up here’s a quick list of the things you can see while you’re going all “Sons of Anarchy” on Langkawi.

The oriental village is like Langkawi’s answer to Disneyland. Containing the SkyCab, SkyBridge, SkyDome and SkyRex as well as numerous overpriced food and souvenir stalls.

There’s free motorbike parking on site. During Peak Season the park is open from 8.30am-8pm and Off-Peak Season from 9.30am-7pm. Some days the “Sky rides” are closed for maintenance, check the website for maintenance days.

Minimum ticket for foreigners is 55 MYR (€12) and includes the SkyCab, SkyDome, SkyRex and 3D art museum. You’ll need to buy a ticket before queuing up for entrance to the SkyCab, but queues move fast. We noticed that there were far fewer queues after 2.30pm if that helps. 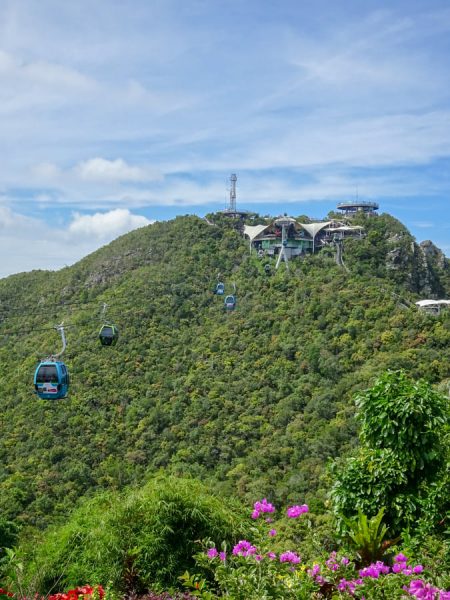 It’s really more of a SkyBox… 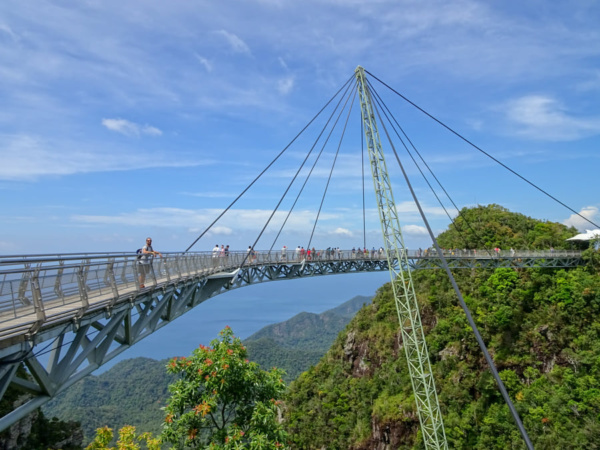 Build a bridge and get over it!

3D museum: a collection of 3D illusions that allow you to be “in” the picture. It was SUPER busy and you could really get pictures without shouting at a child or slapping its parents, neither of which the security guards were too happy about (just kidding!) 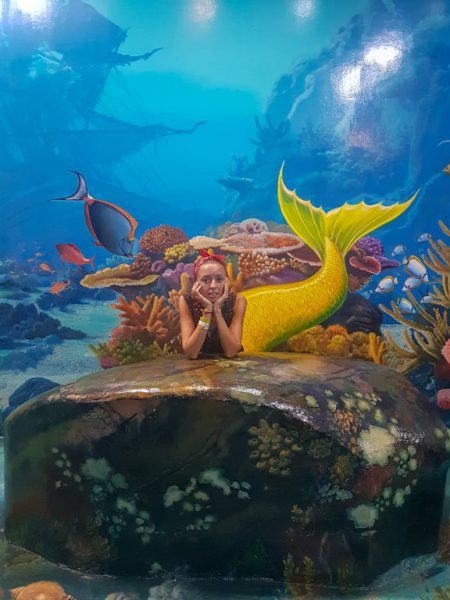 SkyRex: 4D show where you visit Dinosaur Island akin to Jurassic Park. It lasts for about 5 minutes. Again, good for the kiddos.

Close to the Black Sand Beach on the road connecting Pantai Kok and Tanjung Rhu, Faizy Crystal sell Blown glass souvenirs but also have demo’s of the blowing process, think of the Instagram photos!!

Telaga Tujuh or Seven Wells waterfalls is a 90-meter high picturesque waterfall which forms seven pools as it falls. It can be found close to Pantai Kok beach and the Oriental Village.

Laman Padi, or “Rice Field” is a great stop for anyone whos curious about the process of harvesting rice. Located in Pantai Cenang on the road Jalan Pantai Cenang, opposite the Meritus Pelangi Hotel.

Open Daily from 10 Am – 6 Pm. There’s no entry fee although you can hire a local guide to take you on a 2-hour tour and come out knowing more about rice than Uncle Ben. Price is negotiable. 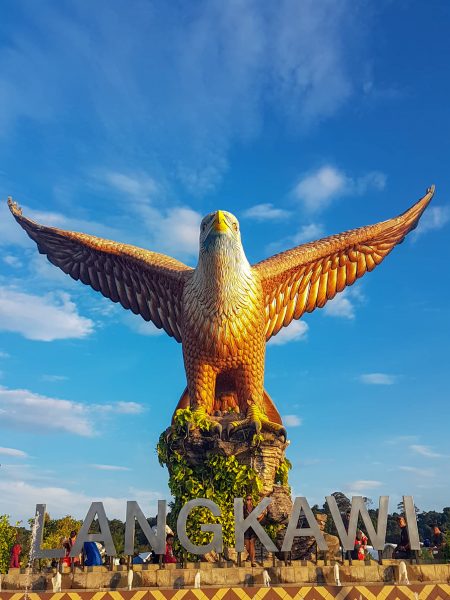 The eagle has landed

In Kuah near the Ferry staring majestically out into the bay is a giant eagle statue. The area is super pretty and probably the best spot on the island for sunset.

Open 24 hours. No entry fee. Just make sure you get there before sunset. It’s worth it. 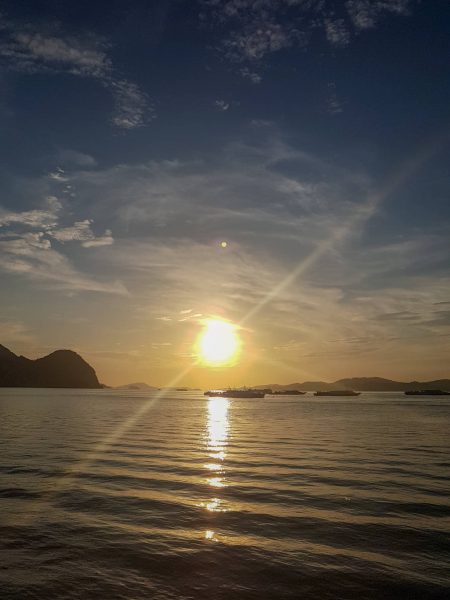 A “eagles eye” view of the sunset

According to legend Princess Mahsuri, the most beautiful woman on the island was married to the head of the village Wan Darus. When he went off to fight the Siamese his mother, jealous of Mashuris ridey-ness, accused her of committing adultery in her hubby’s absence.

The villagers (not believing her protestations of innocence) tied her to a tree for three days in the scorching heat while they decided what to do with her.

On the fourth day, they decided to just bump her off but none of their knives or swords could pierce her skin. Now convinced she was a with to boot the used her fathers own ceremonial blade to stab her in the heart which released a stream of white blood (a sign of her innocence apparently).

As she stood strapped to a tree, leaking white blood and dying, Mashuri (who must’ve been a witch after all) used her last breath to curse the Island and its inhabitants to seven generations of bad luck (because it seems murder and breaking a mirror now carry the same punishment).

Ironically shortly after her death, the island suffered wars and droughts and several natural disasters.

Her tomb is now a revered and respected site to the locals who are obviously terrified of pissing her off again.

The Field of Burnt Rice:

located at Kampung Raja, Mukim Padang Matsirat, about 17 km from Kuah is The Field of Burnt Rice.

When the Island was attacked by Siam the villagers brought all their crops here to burn them as well as poisoning the water as a strategy to prevent the Thai’s from taking a strong foothold on the island.

But despite their plan, the Siamese took the island and held it for a long time afterwards. Leaving the islanders to nearly starve under their new masters. Locals believe this is because of the “curse” placed on them by The Princess Mishuri. Hell hath no fury and all that.

You can still see samples of burnt rice on the ground here, especially after a hard rain.

Note: Food is not cheap on Langkawi, these are the cheapest places we found for a bit of nosebag.

At the southern end of the beach, there is a number of places that serve Roti (mmmmmm Roti!).

During the day along the main street (Jalan Pantai Chenang) are a number of food vans offering cheap Roti, burgers, falafel, and skewers.

At the northern end of the beach, take the left after McDonald’s and walk about 5 minutes until you see Tomato Nasi Kandar restaurant, cheap buffet and menu with vegetarian and vegan options. It is open 24 hours. Lovely food but the service isn’t the may west and they’re not the smiliest of people. But that’s easy to get over for the price.

If you so desire you may cast your ravenous peepers on our Langkawi Instagram highlights here.

As always, if you have any questions queries or criticisms, please feel free to get in touch and let us know, until then…