Laos: Two Days and One Night in Vientiane

Welcome to the jewel of the Mekong and Laos’ capital city Vientiane. With its long wide, unnecessary boulevards, avenues, coffee shops and multitudes of flavors of baguettes (honestly we haven’t seen this much bread since we left Europe) the city has a very, VERY French feel to it, which is not surprising when you consider that Laos was under French rule for nearly 100 years.

While a lot of the blogs we read and research we did lead us to the conclusion that most people find Vientiane quite boring and recommend just to skip it, we found  that a little unfair. It is the capital after all and does have a few cool attractions and in our opinion is totally worth a visit, but we would say a “flying” visit would probably do. You could easily see the city and it’s attractions in two days.

Why not pass through and set yourself a little challenge at the same time? Try and get it done in 2 days, one night. Ready? GO!

If, like us, you’re crossing into Vientiane from Thailand chances are you’ll be arriving in relatively early. Don’t do what we did and land in the hostel endlessly scrolling while trying to recover from a terrible night sleep, instead get your skates on!

Drop your things in your hostel or guesthouse and hit the town. The city itself is quite small, well the parts you’ll want to see anyway, so you can use your first day to explore close to home.

You can start at Pha That Luang. The impressive golden stupa (big pointy thing) of this Buddhist temple is supposedly one of the most important monuments in Laos. The symbol of the city of Vientiane it is considered one of the most important representations of Buddhism and sovereignty in Laos. They’re very proud of it. Entry fee is a respectable 5000 Kip (€0.50) which goes to the upkeep of the place, which is fair enough.

Note: This is a highly sacred place so please, even if you’ve got sexy knees and shoulders, be nice and cover them up will you!

From here you could make your way down Ave Lane Xang, taking in the typical classic French inspired boulevard and architecture ending at the Patuxai monument. It’s about a 30 minute walk.  The monument resembles Paris’ famous Arc de Triomphe, which is strange considering it’s a monument to those who died in the war for independence against the French.

Perhaps our favourite thing about it though is that it was built using funds and materials donated by America that were supposed to be for a new airport, so not only we’re the Laotians cheeky enough to divert the funds and materials, they’ve also nicknamed it “The Vertical Runway”. You can climb to the top of the arch for some beautiful Insta-worthy shots.

When you have a pain in your arch with taking selfies, or trying to get out of other peoples, head down to the river and get your sweat on! There’s a nightly aerobics class at by the river at Chao Anouvong Park.

Aerobics you say!? Are you nuts? Trust us, its amazing craic, there’s loads of people there and worst case if you’re not into it this is a lovely place to catch a sunset over the Mekong river and a lovely way to end day one!

After you’ve aerobicised yourself, or lazily watched the sun sink behind the visible outline of Thailand (yup it’s that close), you can have a stroll down the riverside. It transforms itself into a vibrant Night Market from 6 pm to 10 pm every night. You’ll find the usual fare here from souvenirs to funny t-shirts and key-rings to fridge magnets, and come on, who doesn’t love a stroll around a night market? 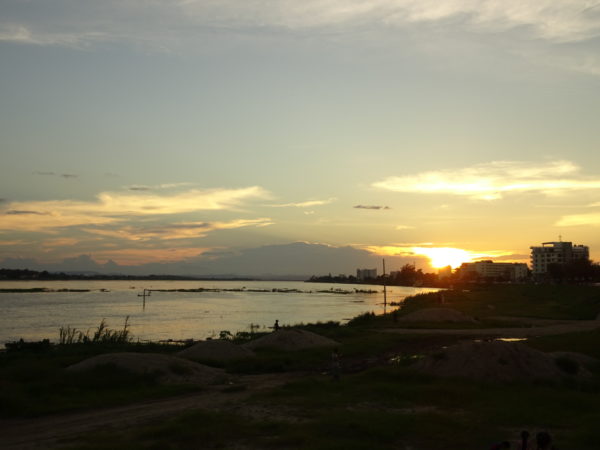 Don’t let the Sun go down on me!

When you’re all done with your shopping head over to Phai Nam road and indulge yourself in some culinary delights at the Night Food Market where you can find everything from typical and delicious street food, noodle soups etc. right up to skewered insects and pizza. The food market is open from 6 pm to 10 pm every night.

Note: If you wanted you could end your night by passing the Patuxai Monument again, it’s supposed to really cool at night all light up. 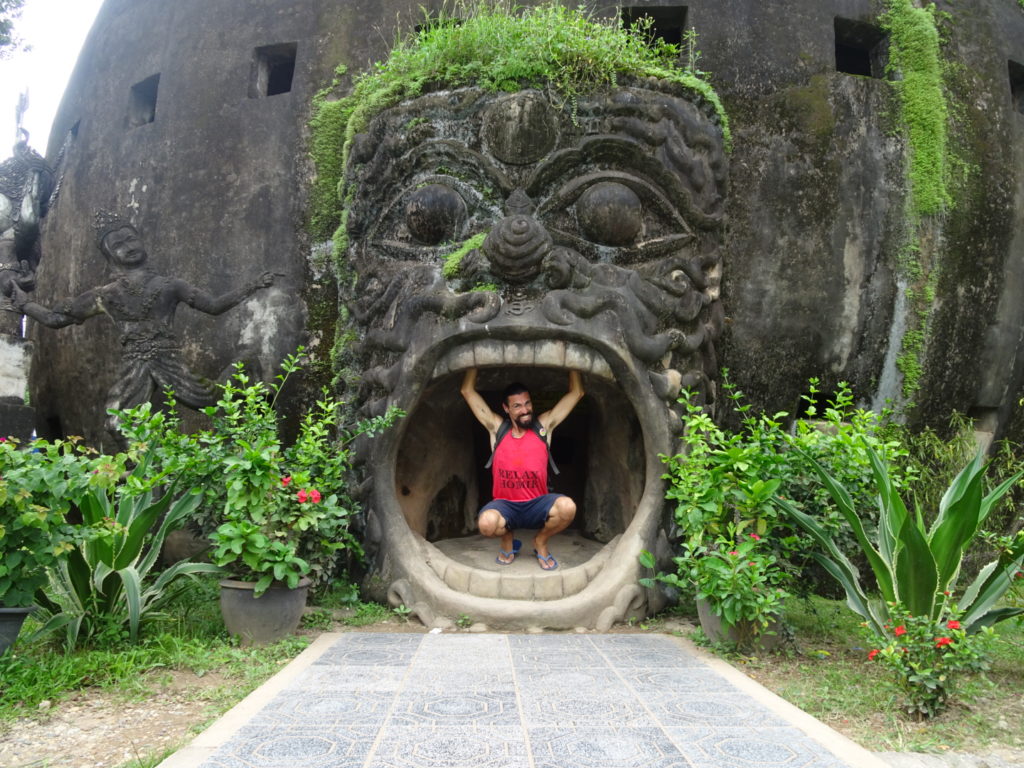 This place is going to hell in a monkey head!

The bus will take you put past the Thai – Laos Friendship Bridge where the majority of the passengers will get off. NOT YOU! Your stop is one of the last ones; tell the driver he’ll let you know.

The site is eerie and beautiful, full of strange statues that have been worn by time and the weather and features a pretty interesting large scale model of Buddhist hell accessed through a giant monkey head a la “the cave of wonders” from Aladdin. To be honest we find these things super interesting, but if you’re not a history buff or someone who loves statutes and museums this may be a bit too much effort for little reward, but I for one enjoyed every minute.

The park closes at 4 pm but you won’t need more than a couple of hours here. To get back to Vientiane head back out to the exit and catch the bus no.14 from the opposite side of the road, there’s no stop but just look for the group of people standing awkwardly together or if you see one just stick your paw out.

Take the no. 14 all the way to the last stop, this will leave you a convenient 10 minute walk from your last destination the Cope Visitor Center. If you do nothing else in Vientiane, for the love of God please visit this place. 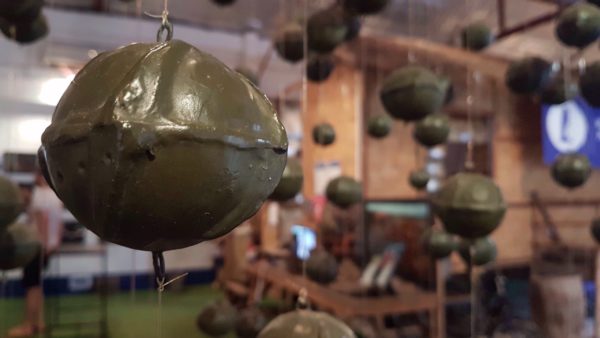 A somber reminder of the hidden threat

COPE, is an organisation aimed at providing affordable prosthetics and rehabilitation services to survivors of UXO (unexploded ordinance) and their families. As well as educating people to the dangers of UXO’s and cluster bombs.

Where did they all come from you ask? Well, the USA engaged in what has become known as the Secret War in Laos. From 1964 to 1973 the U.S. dropped more than two million tons of ordnance in 580,000 bombing missions. That’s equal to a planeload of bombs every 8 minutes, 24-hours a day, for 9 years. This makes Laos the most heavily bombed country per capita in history. This was in order to aid the Royal Lao Government, the side they picked in the Laotian civil war, Why did they pick a side? Because it was during the cold war era and the Royal Lao Government were fighting against the communist Pathet Lao who were supported by, yup, the Russians.

Unfortunately, as the ordinance was not designed to be efficient, sometimes cluster bombs and shells didn’t detonate, leaving a horrible legacy of death and destruction for future generations. Over 75 MILLION of these “bombies” didn’t explode on impact instead they have hidden themselves in the Loation landscape choosing instead to maim and injure children and farmers generations after the “war” has ended. A war which the USA only admitted they were involved with in 2016 (Fair play Obama).

Between 1974 and 2011 more than 20,000 people were killed or injured by these sinister seemingly harmless orbs. Currently there are over 3000 men and women working to find and rid Laos of these bombies and other UXO.

The visitor center is a fascinating look into the bloody history of the country, and a glimpse into its desire to fix itself and move on. You CANNOT come to Vientiane and not go visit. Entry is free but donations are greatly appreciated. Just bear in mind as far as good causes go; this is one hell of a place to donate.

And that would be the end of your second day, so if you started early enough you should be early enough to jump a bus to your next destination. Mission accomplished. Two days and one night in Vientiane been there done that bought the magnet!

We hope you will visit Vientiane, so many people skip it but it really is worth a look. As always, if you’ve got something to add or ask please feel free to comment or contact us, we love to hear from you guys.