Bolivia: A Lively ‘Day of the Dead’ in La Paz

​”To live without hurting others, and to die suddenly, that’s an enviable life and an enviable death”

This quote by a Bolivian author, Gregorio Reynolds, caught our eye as we entered the Cementerio General, La Paz’s biggest and most beautiful cemetery.

Such powerful and true words, so proudly and bodly displayed over the heads of the maintenance men, all dressed in orange overalls, who were clearly taking a well deserved break. Under their watchful eyes we passed the church, it’s not every day you feel cultured just by visiting a local graveyard. Actually, it’s not every day you visit a graveyard, especially one that has no physical nor emotional connection to you.

But this wasn’t just any day, it was The Day of The Dead. Well, sorta. 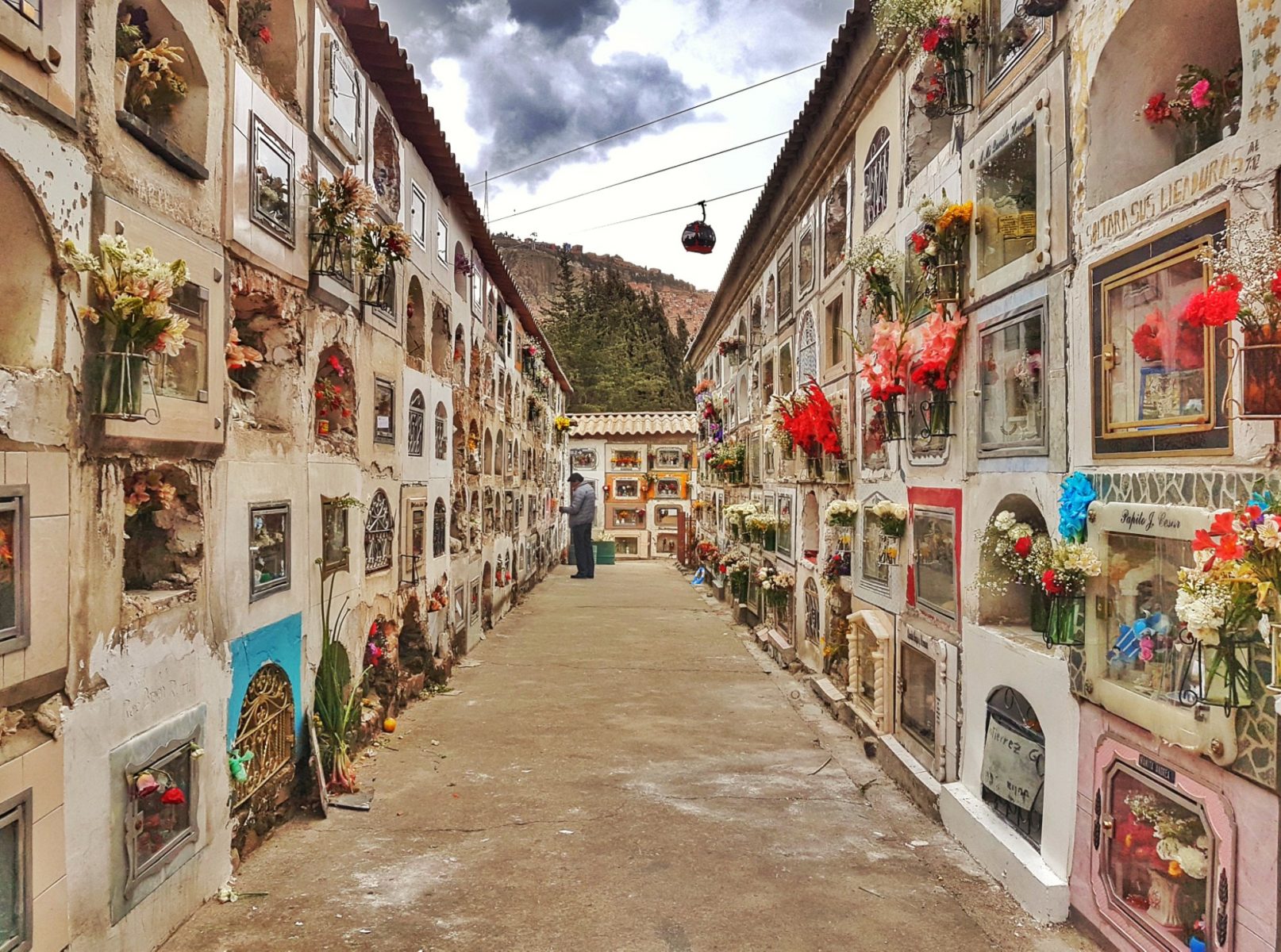 You see, the day previous, on 2nd November 2017 at around 3pm, we had arrived at the same entrance. Only this time, we stood behind a queue of locals, who quickly became a mob.

Toothless men, hiding from the sun under worn, torn caps, held on tight to the large bundles and bags thrown over their shoulder.

Standing by their side were Señoras, all with blackened skin, heavily wrinkled from their years of working outdoors, wearing their traditional dress; a large black pleated skirt, topped with dark petticoats and draped with a black embroidered shawl, complimented by their long silk plaits, which were held together by a brooch, and topped with the famous Bolivian bowler hat, creating a wave of blackness. This cholita attire, usually always colourful; pastel blues, vibrant purples and bright yellows, but not today. The only colour seen were their striped, rainbow coloured rag-like bags, tied tightly across their chest, full to the brim with food.

Kids, with one hand holding their guardian, and the other gripped around flowers, bags of popcorn, and sometimes even vegetables, stared at their families who shouted angrily at the police up ahead.

“We will push!” screamed a young lady, with a curly white dog in hand. “Don’t let them close the gate” boomed a man, whose saliva sprayed across the crowd mid-sentence.

A line of helmets, caps and sunglass, the police ignored their roars as they blocked the gates, forbiding anyone from entering the already packed graveyard.

You see, on this day, across all of Latin America, families rejoice and celebrate the life and death of those who have passed. It was The Day of the Dead, Día De Los Muertos.

A religious festivity and somewhat superstitious tradition, this is a day full of smiles, song, chat and prayer, this is a day of celebration. One where the deceased arrive, due to the weakened portals between the worlds of life and death, to visit their loved ones, and as whispers go, to also ensure they are remembered.

The days leading up are full of preparation. Governments clean and repair the weather-worn headstones and paint and fix the glass-window tombs. The household women bake tantawawas, an array of sweet bread, some embedded with small, clay-painted faces, others shaped to form babies, animals and even ladders, giving a way for the spirit to climb back up to heaven. 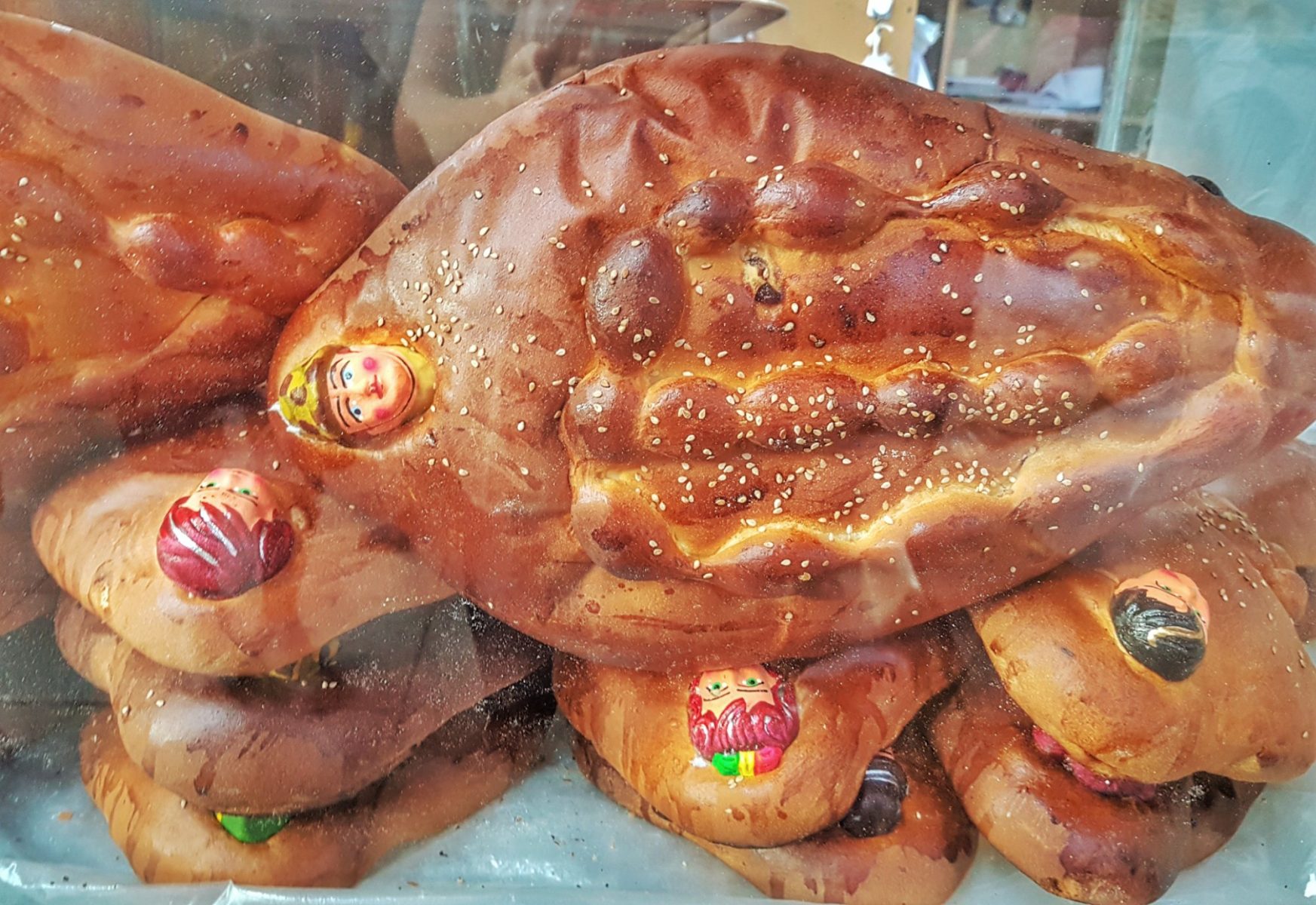 Feasts, with a variety of both sweet and savoury food, are prepared and packed alongside bags of popcorn, raw vegetables, fruit, sweets, chocolate, fizzy drinks and even beer. Musical instruments, polished, practiced and tuned, are readied for the party.

Thousands head for the local cemetery, where they believe they are about to dine with the dead. With photos in hand, and large food-filled bags, it was time to visit their missed member, to share their love, to tell their stories, to remember their moments and to then feed the souls, so they have the energy to return safely to the afterlife for yet another year. 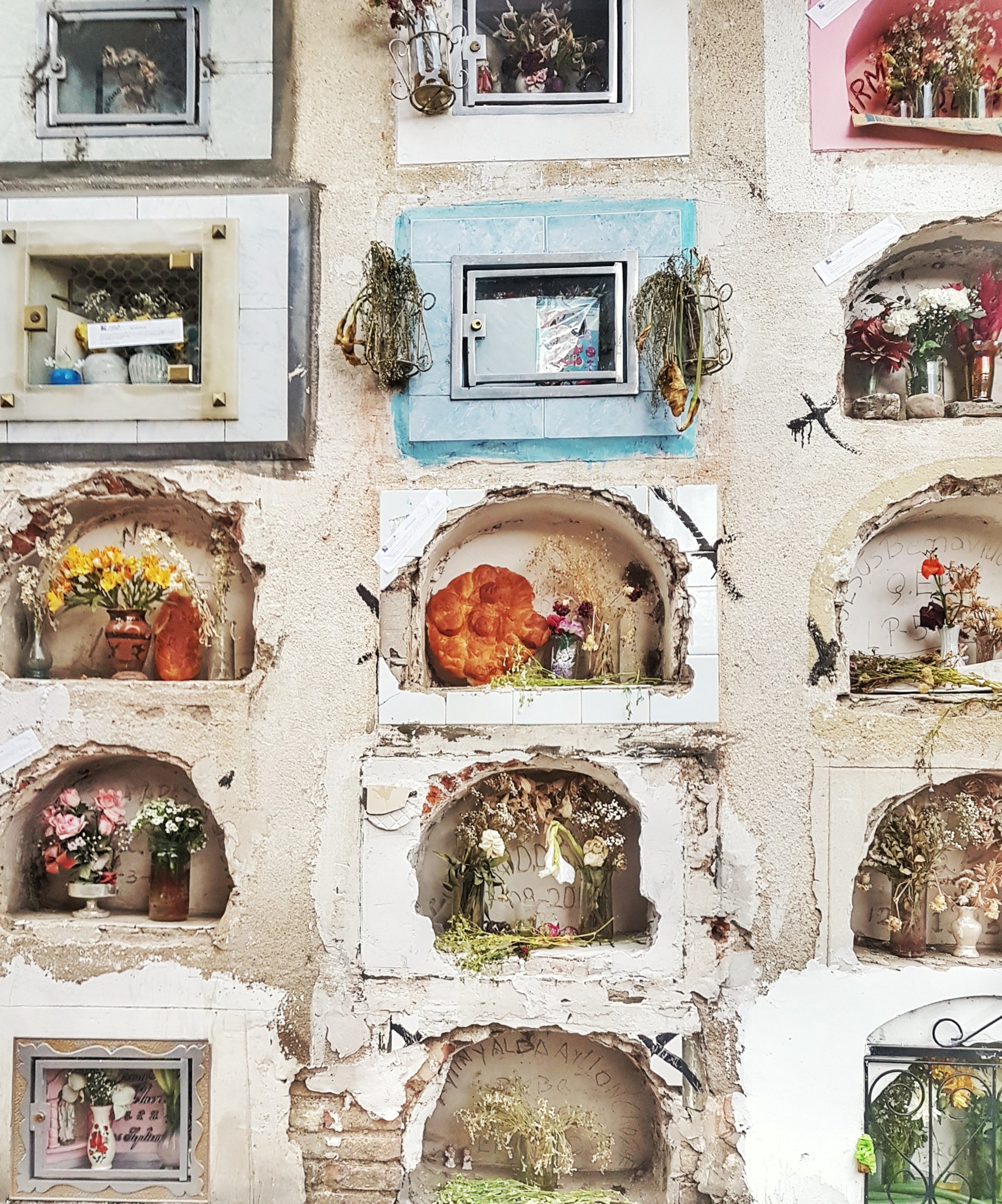 Celebrated slightly differently in each Latin America country, here in Bolivia, before the Spanish invasion, we interestingly read on BoliviaBella.com that family members would remove the bodies from their place of rest. They would dress and place the deceased at the head of the feast, to then dine and dance with them before returning them to their tomb. A custom that the Spanish prohibited on arrival.

With all this knowledge, here we were, standing behind the hundreds of Bolivians, eager to feel the sense of spirits, in one of the highest cities in the world.

Here we were, saddened, angry and disappointed at the police in our peripheral, who refused to allow the men, women and children that all wanted to reunite with those they missed.

Two gringos, one dressed in a fitting skull and bones t-shirt, we backed away yet hovered with hope the cops would, excuse the pun, let down their guard.

Unsuccessful, we overheard the irratated mumblings of the mob, deciding that they would return again tomorrow.

And so would we.

Slightly overcast, windy, cold and feeling a bit more morbid than that day before, we covered our eyes as we strolled down the dusty corridors of Cemeterio General.

To our left and right were small key-locked window graves, full with food, flowers and other offerings. Ahead were large angel adorned tombs, surrounded by the more traditional headstones. Each block of graves topped with a surname, all those windows belonging to just one family.

The wind carried the sound of singing, accompanied by trumpets and guitar. We followed the music to find a family of around 10 crowded around a blue wooden ladder, that lead to their loved ones window. The song was not in Spanish, but either Aymara or Kechwa, the indigenous languages of Bolivia.

A large cloth was sprawled on the ground, with women, legs hunched under their large puff skirts, filling plates with food as the men, all stood in a semi circle, continued to carol and chant. The younger children played with plastic bottles while the teens recited the Hail Mary, and together the noise clashed with that of another family, only a few passages away.

A photo of a young baby, not even one year old, sat infront of them. The uplifting music, happy faces and loud murmurs were such a contrast to how we felt. Emotional, tears filled my eyes as the sounds filled my ears, and I swallowed hard the large ball of emotion stuck high behind my tonsils.

I wasn’t sad. I was moved. Losing a child is something no one should suffer, the very thought pains my heart. This family suffered a huge and devastating loss, yet no one was sad. The window was open, and in it was a glimmering candle, decorated with flowers that lay beside a tiny ladder-like piece of bread. A small glass bottle of water sat beside a thumbnail glass, which was filled, should the little baba become thirsty.

The cemetery was busy, albeit not as busy as the day before but in the end, we were happy to have the space to discreetly stand and observe. Intrigued by just how many families were performing the 2nd of November tradition the day after the fact, considering  the spirits have been and gone, to them, and to us, this minor detail didn’t play a part. It was solely about commemorating, no matter the day nor date.

A man, hidden under a fedora strolled passed plucking on a guitar. We followed him as he covered a large area of the cemetery, playing for everyone, playing for the dead. 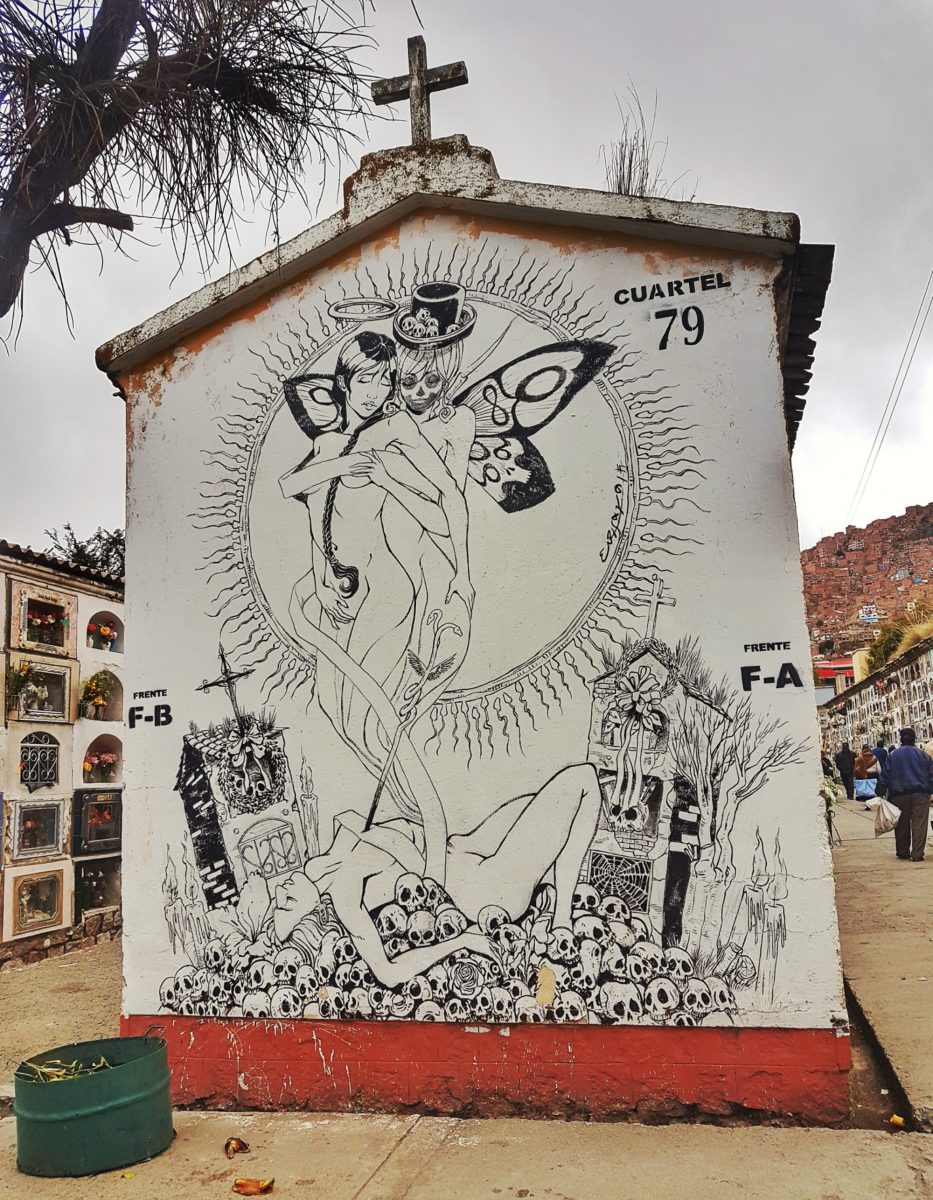 After an hour, we arrived back at the church. The doors opened, and out stepped large 5ft flower wreaths, followed by the feet of the mourning men and women. We stopped, clenched our hands, removed our hoods and bowed our heads. A man, dressed in a tailored suit, with an open umbrella attached to his waistband, followed the carried coffin, lightly playing his acoustic guitar, singing from the depths of his soul. Behind him, the exhausted family and the grieving friends of the departed.

Again, my vision was impaired thanks to the trickles of tears that began to roll down my face. I couldn’t help it. I didn’t understand and I had no idea how I felt.

We listened as the guitar sounds faded, replaced by local laughter, chat and the vocal tones of those singing. The atmosphere was, ironically, full of life once again.

Luke, a little concerned with how upset I was threw his large protective arm around me. I found it hard to speak, and was curious as to why I was so upset. I’ll admit, I’ve visited the graves of those who are most important to me, yet I didn’t cry. I’ve attended Ireland’s ‘the blessing of the graves’ and rarely felt moved. I’ve witnessed passing funerals, heartbroken families, and merely did the stereotypical Irish thing of blessing myself, to then continue on with my day. Maybe it made me a little homesick, maybe it was because I wanted nothing more than to call every member of my family to tell them I love them. Maybe it was the floods of memories with friends and loved ones, who, at that moment, felt so far away.

I wasn’t exactly sad but rather, a little overwhelmed. You could even say shocked, that something so traditional and normal for the hundreds and thousands of Bolivians had really stuck a chord with me.

Toying with my emotions, not knowing whether to be sad, happy, amazed or hella impressed, or maybe it was all the above, I decided that I had seen enough, and together, we left the respected families to tend to their loved and wanted souls, without our wandering eyes.

All I know is that I will forever be grateful to have witnessed such an incredible ceremony. I’m delighted to have the opportunity to be able to travel, and land in Bolivia’s La Paz for such a crucial culture day. And of course, I’m lucky. Lucky to be alive, lucky to be here and lucky to be able to share this experience with you.

In Bolivia, and Latin America, they believe that death and life are one. Although physically separated, and despite the fact that the dead are always with them in spirit, this one happy day is spent rejoining their heavenly families, celebrating the afterlife, knowing that it’s not the end, and that, when they pass, they too will one day return.

A powerful tradition, a beautiful belief, and a positive way to live, removing the terrifying thought that every second, every minute, and every day, we are all that one step closer to death.

Obviously, out of respect, we didn’t take any photos of the ceremonies. Although the sights and cemeterary are something we would love to visually share more of, we remained humble and discreet, ensuring we didn’t disturb anyone when taking the above.

I’m a self-diagnosed wanderlust sufferer who fell victim to the travel bug. As someone who has yearned for the freedom to travel for as long as I can remember in 2017, I decided to quit my dream job, run away from the "marriage and baby" queries and trade the societal life for a life on the road. Now, I spend my days wandering through the unknown, being nosy as hell while sharing stories, building websites, helping others plan their backpacking adventures, writing, filming, snapping and reminding myself to shut up and stop talking every now and again.