How To: Travel from Montañita to Cuenca

After a few days lounging in Montañita, we wanted to end our Ecuador journey with a trip to Cuenca, all while skipping the Guayaquil city. Two busses and less than $15 each, here’s how we did it:

The bus company we used is Cooperativa Dr Transporte Libertad Peninsular. In Montañita, head to the main road where busses fly by frequently.

Now on the road, with your back to the entrance of the town, take a left. In less than five minutes, on your left hand side is a small seated area, and a ticket office.

Busses to Guayaquil start at 4.45am and run until 7pm. See below for the most recent timetable (July 2017) 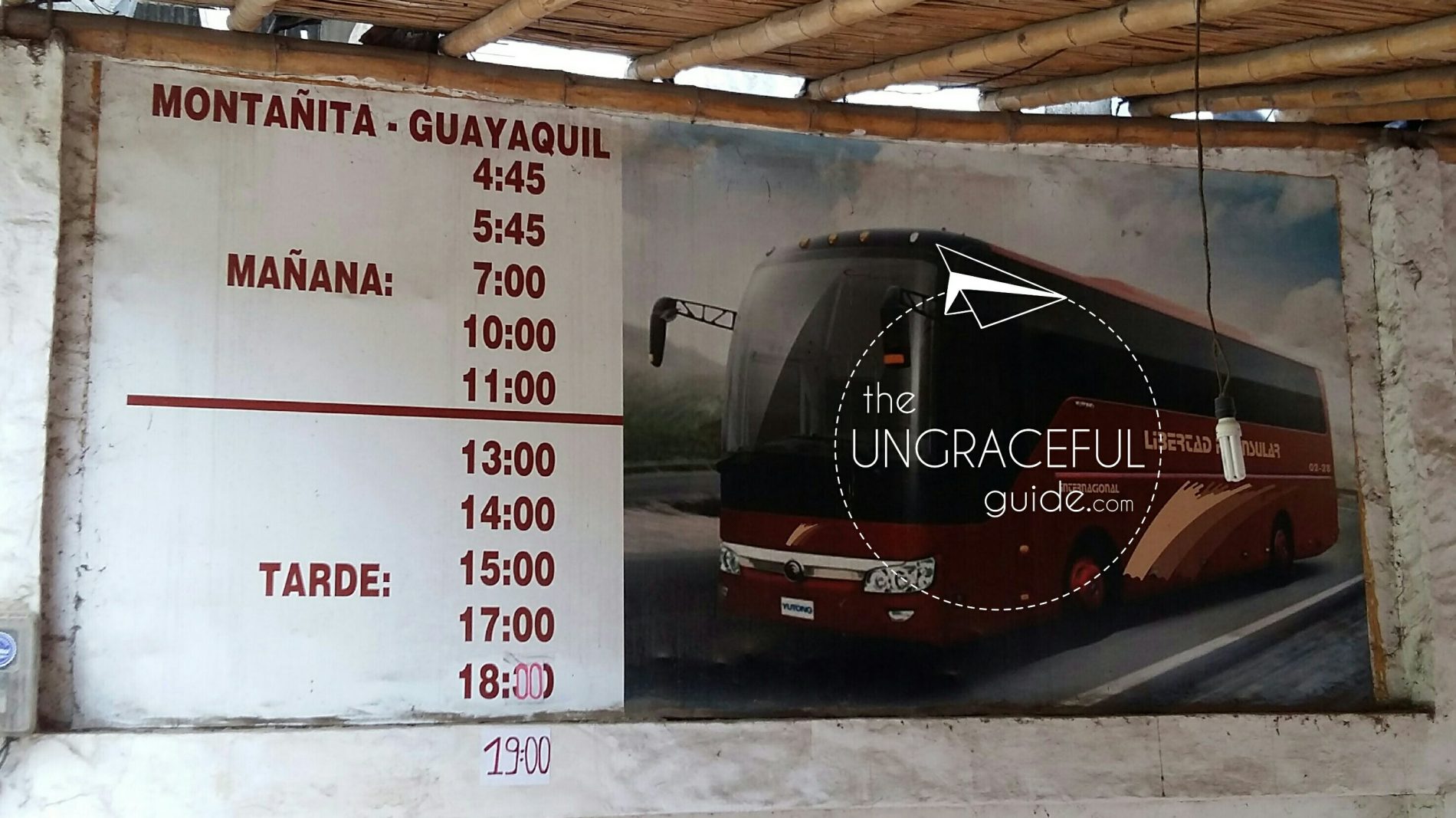 The updated timetable as of July 2017

From where the bus terminates, walk into the Guayaquil bus terminal and take the first left. Head towards the orange coloured ticket booths.

The bus company we used was Alianza at Gate #51. They have a bus leaving at 20 minutes past the hour, every hour.

There were two busses leaving at 4.20pm. Costing just $8.25 pp. There is a $0.25c tax to enter turnstiles where the busses depart. A random cost but everywhere in Ecuador seems to do it and hey, locals pay it too.

The food court in this gigantic airport-like bus rerminal is worth a mention. With lunches and dinners from $1.50 and plenty of choice, snack up here.

Tickets in hand, head up to the top floor towards ‘Andenes 88’. Oh and the bus had a toilet, and also makes a stop an hour or so into the journey. It’s a 4 hour journey in total.

Arriving safe and sound, exit the Cuenca bus terminal and take a right up Avenue España until you reach the small roundabout. Now at the roundabout, follow the left exit and then take the second right onto Gran Colombia. Stay straight on Gran Colombia and in less than 10 minutes, swing a left onto Luis Cordero.

Here’s where you will find the central park and a fold starting point for your hostel hunt.

It might be worth to mention that we didnt think too highly of Cuenca. A quiet city, it was nice to stroll in the sun but overall, we booked too many nights there, and were slightly underwhelmed by everything from our hostel to local attractions. Because of this, we felt a blog wouldn’t do it any justice.

But like always, that’s just our opinion and urge anyone and everyone to visit, regardless of what we think.