Peru: Lima, The City Of Kings

After being totally wowed by our previous stops in Peru, we weren’t expecting much from the country’s capital city. We were surprised to find that Lima is, in fact, a bustling metropolis with all the trimmings you’d find in any European capital city, from the slightly dodgy 28 de Julio (where you’ll find all the bus terminals), to the graffiti decorated walls of the hipster Barranco neighbourhood, from the bumper to bumper traffic of the city center streets to the tailor made gringo haven of Miraflores. From your usual corner tiendas to giant shopping centers, all the American fast food chains, as well as local restaurants, owing to its large expat population, Lima has it all.

Normally we’re weary of big cities and try to get in and out of them as quickly as possible, but Lima is a lady who knows how to show you a good time. She definitley lived up to her original name ‘Ciudad de Los Reyes’, The City of Kings. We enjoyed her royal company for a few days and we think for her, even Jon Snow would bend the knee.

From Huaraz to Lima:

There wasn’t much information online but we took a bus from Huaraz to Lima, for full details on the journey click here.

Once you arrive in Lima walk out of the bus station onto Calle 28 de Julio and take a left, you’ll walk straight through a industrial estate and pass all the other bus stations (each company has its own station).

At the main traffic-heavy junction, on your lef, the metro bus line is in the middle of a motorway. Take the left towards it, walking along the bridge and still following all the bus companies, including Movil. Up ahead, you’ll need to cross a bridge to get to the station, and should see the station before you see the bridge. Keep walking and cross over. Whatever you do, do not cross the motorway.

Take the north Metro line B or C to Barranco or Miraflores. The station nearest Barranco is Union and nearest Miraflores is Benavidas or Ricardo Palma.

One card between two or group is fine. The journey takes about 30minutes, the metro is efficient and safe to use, but as always mind your belongings. 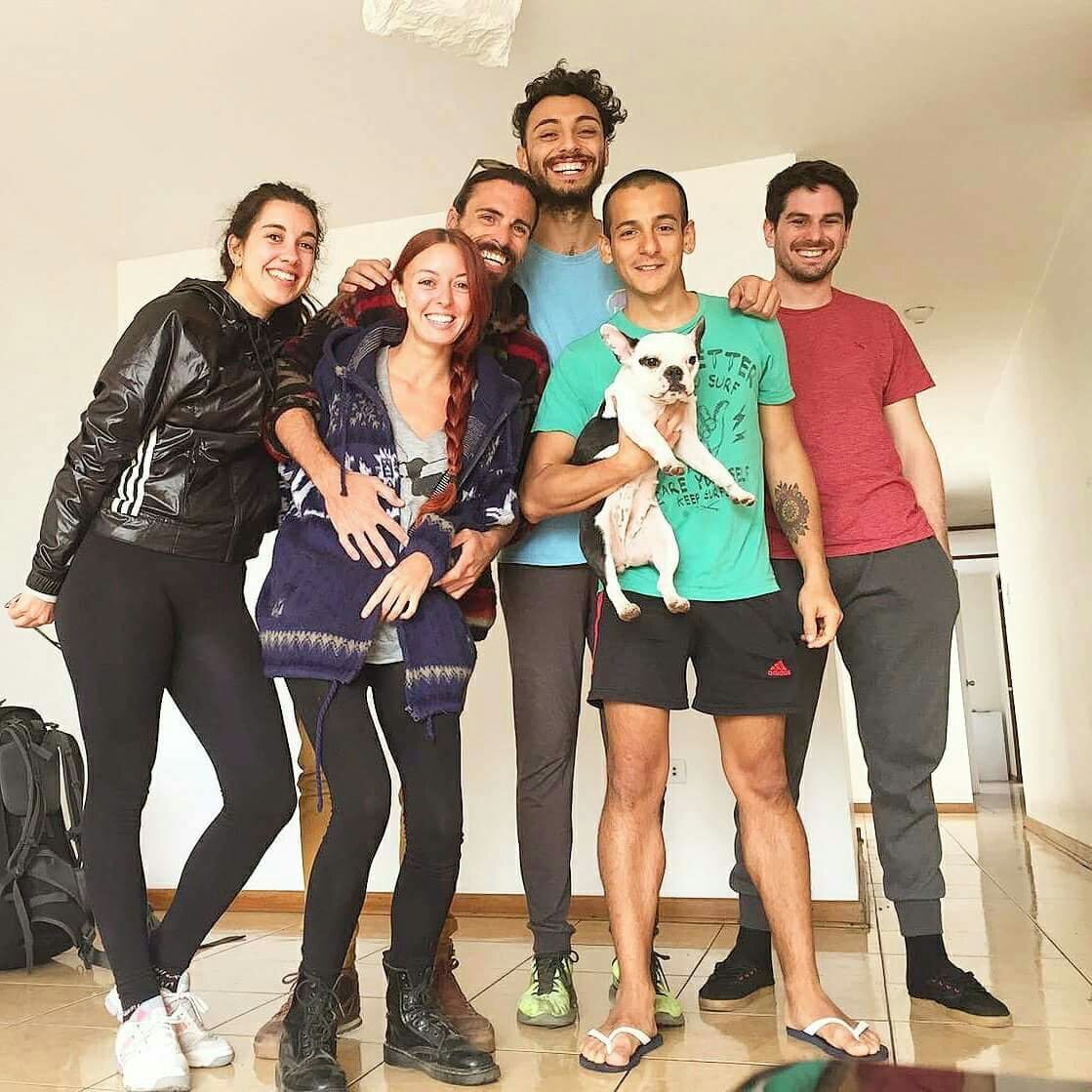 Our Peruvian family, pets and all.

Lima was one of those places where it actually worked out cheaper for us to get an Airbnb, and man are we glad we did.

We stayed here with Joel and Damian, their French bulldog Aika and their cat Tadeo (they have since added another cat to the clan).

The place was super comfortable, very reasonable and the guys were absolutley amazing. So much so we stayed with them twice!!

If you want to get in touch with them directly let us know and we’ll pass on their contact info.

Things To Do in Lima:

Walk Along the coast from Chorillos to Miraflores and further: 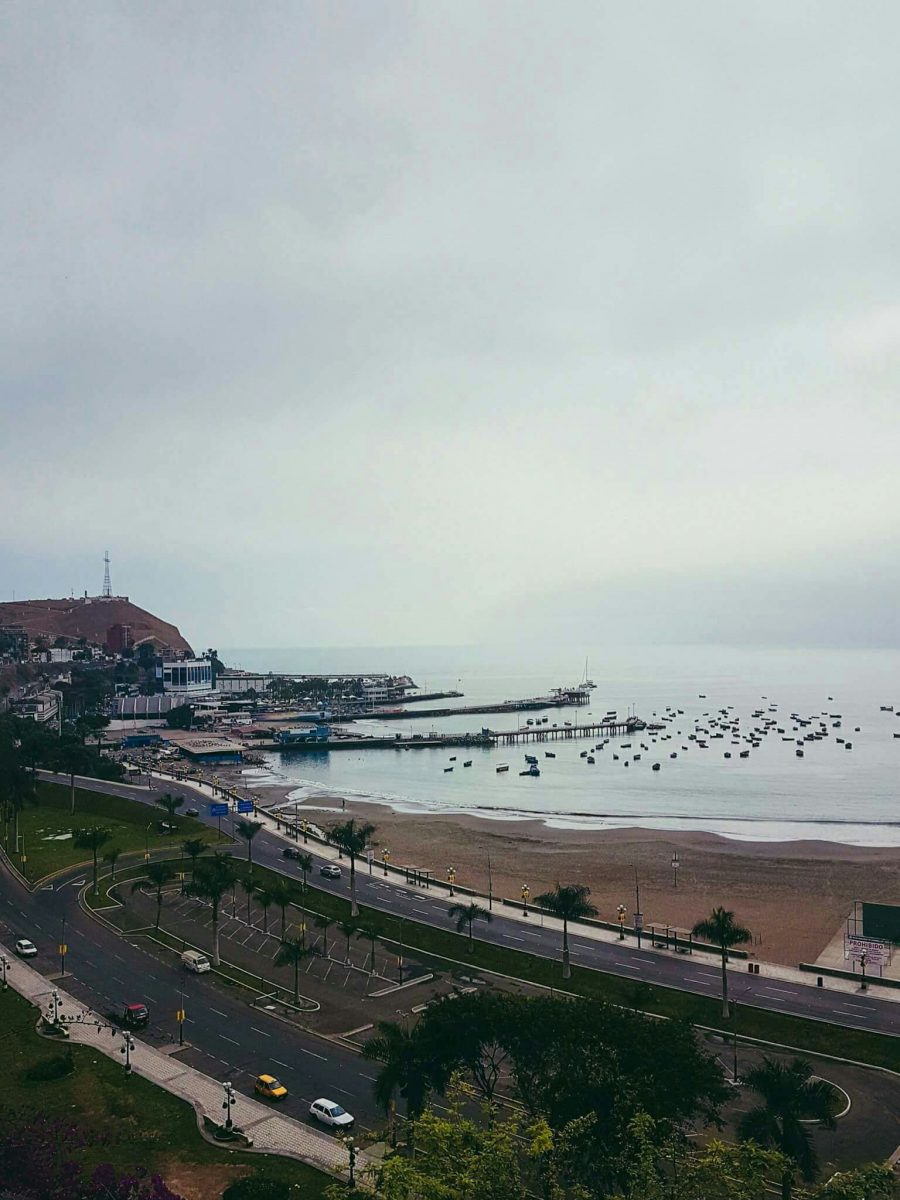 Not a bad auld view!!

From the Barranco neighbourhood, there’s a beautiful coastal walk hugging the split level city of Lima.

The dramatic coastline boasts stunning views, and if you walk along the beach you have the towering cliffs to your right all the way to Calle Independencia, with signposts warning of the tsunami evacuation areas.

Or if you walk along the cliffs you have a birds eye view of the beach the whole way, either way it’s a gorgeous walk… 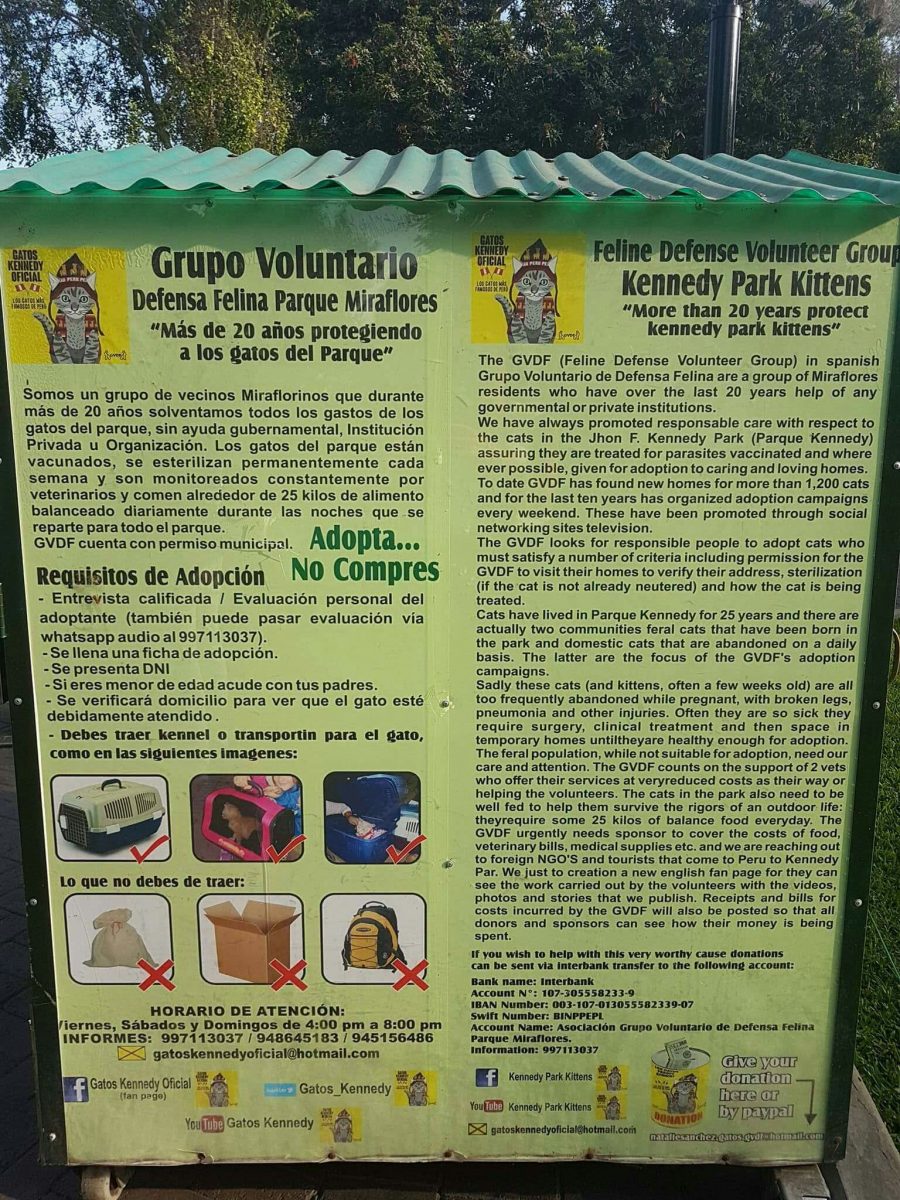 Calling all crazy cat ladies, we have found your Mecca.

In perhaps one of the most touristy areas of Lima, Miraflores, flanked by fancy hotels and every variety of American fast food chain you can imagine lies El Parque JFK.

Not the most interesting attraction I hear you say?

Well, although this park is a constant source of both food and entertainment, from the food stalls to the night time artesanal/flea market, and the elderly people that gather daily to dance their cares away, it is in fact the parks residents that make it a must see in Lima.

JFK park is home to at least a hundred stray, rescued and abandoned cats. Apparently, years ago, the residents started to feed and look after the vagabond animals who stayed there, and according to local legend, with more and more litters appearing, all of which in turn stayed and did the same. It’s the circle of life, Simba.

Today you can go and rehome an animal from the park, or just pop down and hang out with them.

Having a stressful travel day? Why not stop on the way home and pet a kitten?

Although we didn’t partake ourselves, when we were on our walk along the Circuito de Playas de la Costa Verde, we came across a row of open tents at Playa Makaha offering rental or surf gear as well as surf lessons.

The coast floor was a little rough for our liking/level but for a slightly more veteran surfer than ourselves it would be an awesome way to spend an hour or 2. 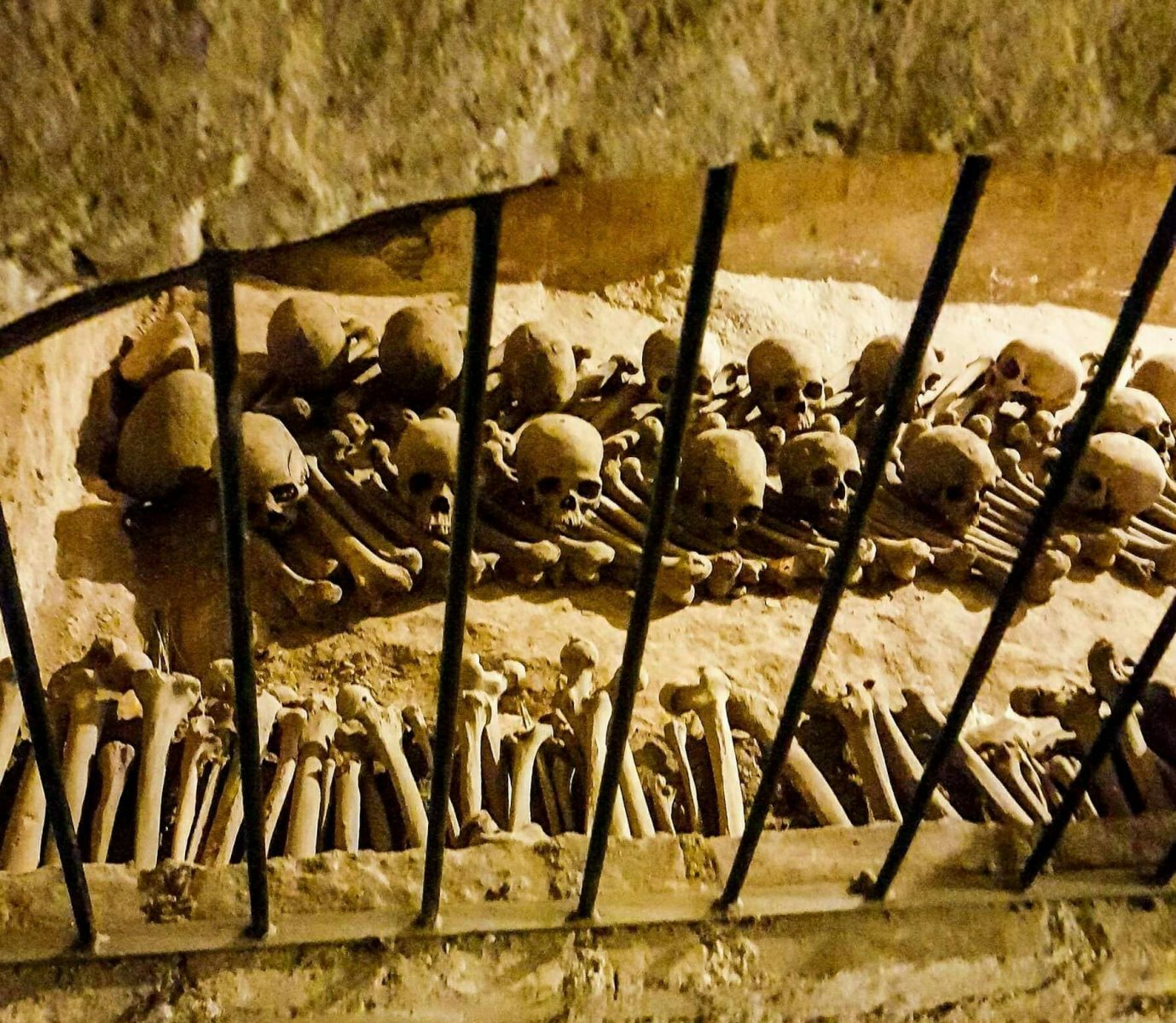 How many bones has a grownup got?

In the Lima district lies the Basilica de San Francisco. Originally built as a quarantine area for all the disease riddled “settlers” brought over during the Spanish invasion, the crypts below house over 70,000 skeletons/skulls artistically arranged by the archeologists who discovered them.

The basilica has the second biggest ossuary (a fancy word for skeletal resting place) in the world, after Paris.

There is no photography allowed inside (we got a sneaky shnap for you, our loyal readers) and entrance is strictly prohibited unless accompanied by a guide.

Guided tours leave every 15-20 minutes and are in Spanish and English (make sure you tell them which you’re interested in. Entrance is 10 sol (€ 2.60) including the guide.

How To Get There:

Take the Metro line to Estacion Central, you can walk from here in about 15 minutes.

You will pass through the Plaza de Armas (main central square) en route.

If lost, the Peruvians are an awesome bunch, just mention the Basillica and they’ll have you on your way. Or like us, you can always download on offline Google map.

Beside Estacion Nacional, there is a beautiful park with some very interesting water features and fountains. The park itself is free during the day but costs 4 Sol (€1) at night.

The entry fee is well worth paying as they put on a light/music/waterworks show at night.

If you’re not interested in the park itself, there are a number of stalls and restaurant’s circling it that may warrant a little attention (just bear in mind it’s a gringo heavy area so prices go up accordingly).

In the Plaza Bolivar you will find a museum outlining and containing examples of torture devices and methods used by the Spanish, on the natives, during the inquisition.

Highly educational, but not for the squeamish, this free exhibition is a great way to kill an afternoon (no pun intended). 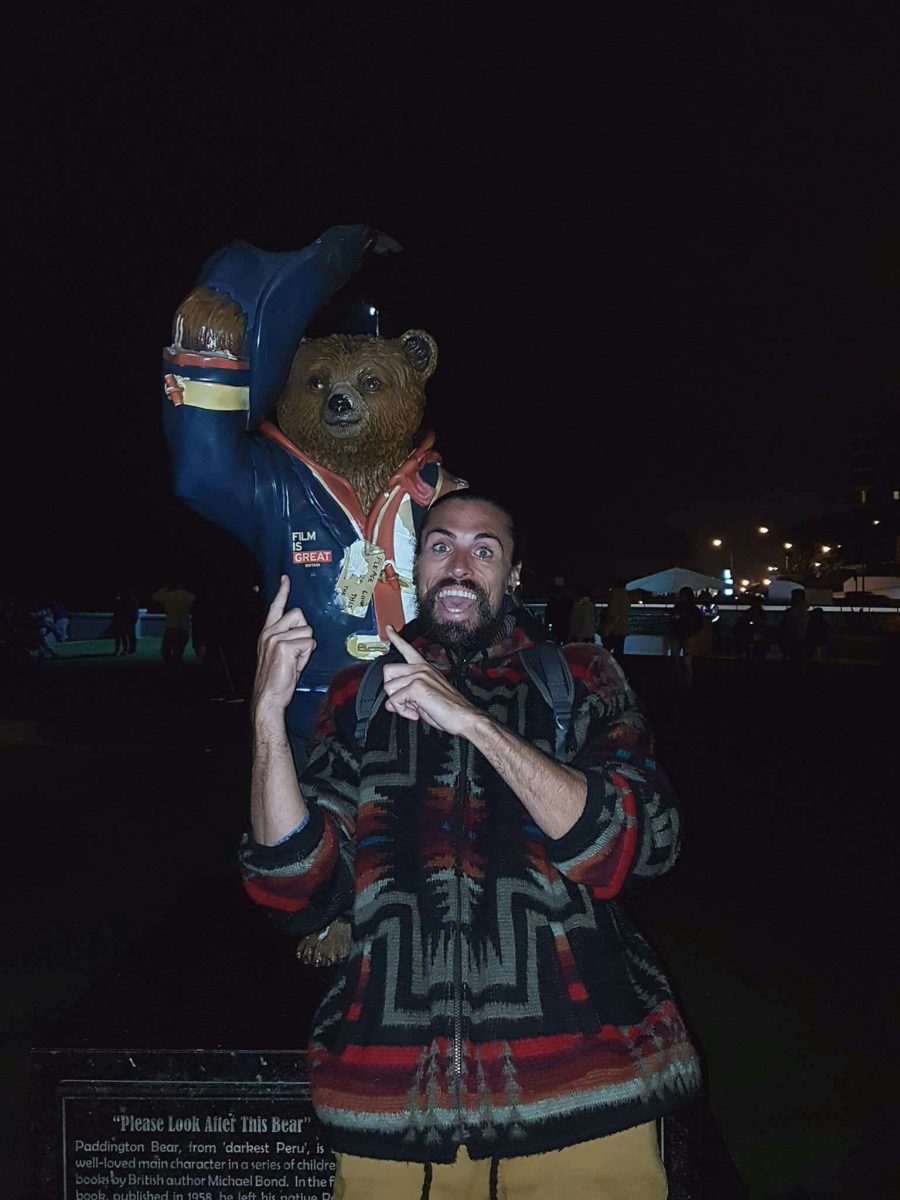 I could bear-ly contain myself!!

A childhood favourite, everyone remembers Paddington Bear. The hat, the coat, the suitcase and the marmalade. What I didn’t remember is that Paddington is actually from “deepest, darkest, Peru”.

So imagine our delight when we found out that in El Parque Salazar, looking out over the bay of Santander, there’s a statue of the UK’s most beloved travelling bear, designed for the city by the sometimes narrator Stephen Fry with an inscription that reads “Please look after this bear”.

The craziest and cheapest market in Lima (that we found) is near the Gamarra train station. We came across it while looking for the local witches’ market.

Apparently there’s one hidden under the station here. We found some info online and decided we had to investigate. The research told us that it’s hidden directly underneath the Gamarra station, where the man is selling snake skin outside, which we did find. Across rhe road from said station.

However, the market up above him and behind him were closed and none of the locals we asked had heard if the market, so we left defeated.

We visited on a Sunday so it could have been a right place/wrong time situation.

How To Get Here:

Take the metro to Estacion Mexico, exit the station onto Avenida Mexico and keep walking straight until you meet the railroad tracks above.

Take a left and walk down through the food market. At Gamarra Station cross the road on your left and head straight, you won’t miss this mental market. From men with snakes selling snake oil for erectile dysfunction to electonics, clothes, health products, and even mattresses if you need it, you’ll find it here.

Besides the Basilica, and the surf, all of the above cost nothing to visit. Our favourite kind of city!

So if you’re penny pinching, and saving that budget to blow in Cusco, we can promise some culture and entertainment in the above suggestions.

As always if you need more detail or have any questions our vital door is always open.