How To: Hanoi To Phong Nha Ke Bang National Park

As this activity was a mile and a half outside our budget we opted instead to rent a motorbike from our hotel for 100,000 VND (€3.80) per day and explore the national park on our own.

Renting the bike and driving the park loop is itself worth the visit, getting there by public transport though can be a little complicated and confusing so we’ve done our best to simplify the process for you guys based on the mistakes we made getting there. You’re welcome. 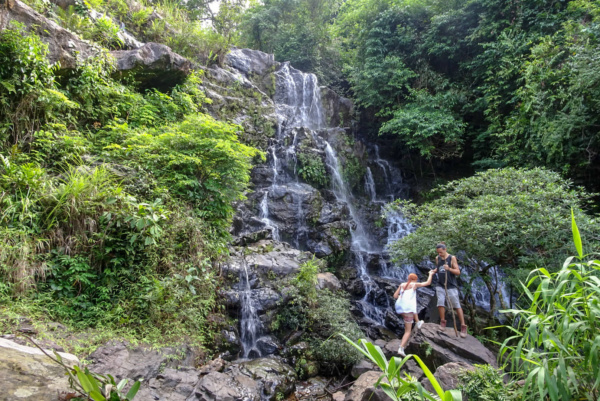 The Real Beauty of Phong Nha

From Hanoi To Dong Hoi:

To get to Phong Nha you will first need to take a bus from Hanoi to Dong Hoi, the capital of the Quang Binh province, and gateway to Phong Nha National Park.

There are several companies upstairs in Bến xe Nước Ngầm bus station in Hanoi going to Quang Binh, as always haggle for the best deal you can but just make sure the buses are stopping in Dong Hoi city, Ben Xe Nam Ly or Ben Xe Kinh Chao are the most convenient terminals.

There we found a small waiting area to chill until local buses start running with nearby stalls open from 5 am serving food and coffee.

From Dong Hoi To Phong Nha:

The first bus to Phong Nha will pass by between 5 and 5.30 am, you can triple check this at the ticket office but note the bus passes outside the terminal, not from the terminal itself.

Take the local B4 bus for 40,000 VND (€1.50) per person. The bus stops all along the Main Street, Trung Hao Dao, that runs outside the bus terminal. From the King Chao terminal, cross the road and head left, look out for the blue bus stop signs with B4 displayed.

If you arrived into Nam Ly Bus Terminal, walk outside and cross the road, the bus stops directly outside. Youll need to flag it down as it won’t stop otherwise.

From the Dong Hoi train station, it is a 10 to 15-minute walk to the Nam Ly Bus Station, where the B4 bus passes. Exit the train station, walk straight to the end of the road and take a left. Take another left at the roundabout up ahead and stay on this road, cross the bridge and you will reach another roundabout.

At this roundabout take the left exit and Nam Ly Bus Station is ahead on your left. The B4 bus passes directly outside, flag it down when you see it.

Note: These tickets are RETURN TICKETS so keep them safe for your return to Dong Hoi.

It is an hour and a half to Phong Nha, the bus stops along the main tourist road where the majority of hostels and homestays are.

Located on the main strip on the same side of the road as the bus drops you, you will find Nhat Tan Hotel. Comfy and convenient, we recommend you book in advance to secure a better deal.

Cost: €6 per night private room with breakfast and balcony.

Facilities: Cold Shower, Good wifi and they’ll let you boil water for tea or coffee which is handy.

A quick note on some cheap and tasty food in the area,

So although we didn’t do the must do’s, we did do what the majority of visitors don’t do, didn’t we? Are you dizzy yet?

Long story short the real charm of Phong Nha, for us, was in renting the bike and taking our time admiring her natural beauty, every nook and cranny we could find, and we definitely recommend you do the same!

As always we’ll leave the Insta highlights here in case you’re in a voyeuristic mood, and if you have any questions comments or criticisms please feel free to get in touch. Honestly, we love the attention.