Colombia: From Bean To Bar, Volunteering On A Chocolate Farm

Travelling through Central and South America, the website HelpX has provided us with some incredible opportunities. None more so,l than working with Origen Cacao. An organic, single origin bean to bar chocolate company in the hills of Medellin, Colombia.

I’m a MASSIVE foodie, so this was an opportunity for me to learn more about man’s greatest innovation; chocolate.

We arrived at the house late at night and struggled up, what we were told was a hill, but would be better described as a mountain. Weary from travel, our host Dani showed us to what would become our home for the next 8 weeks. Our new haven, what was once an old Fonda (a type of local Colombian bar) and before that, a barn. 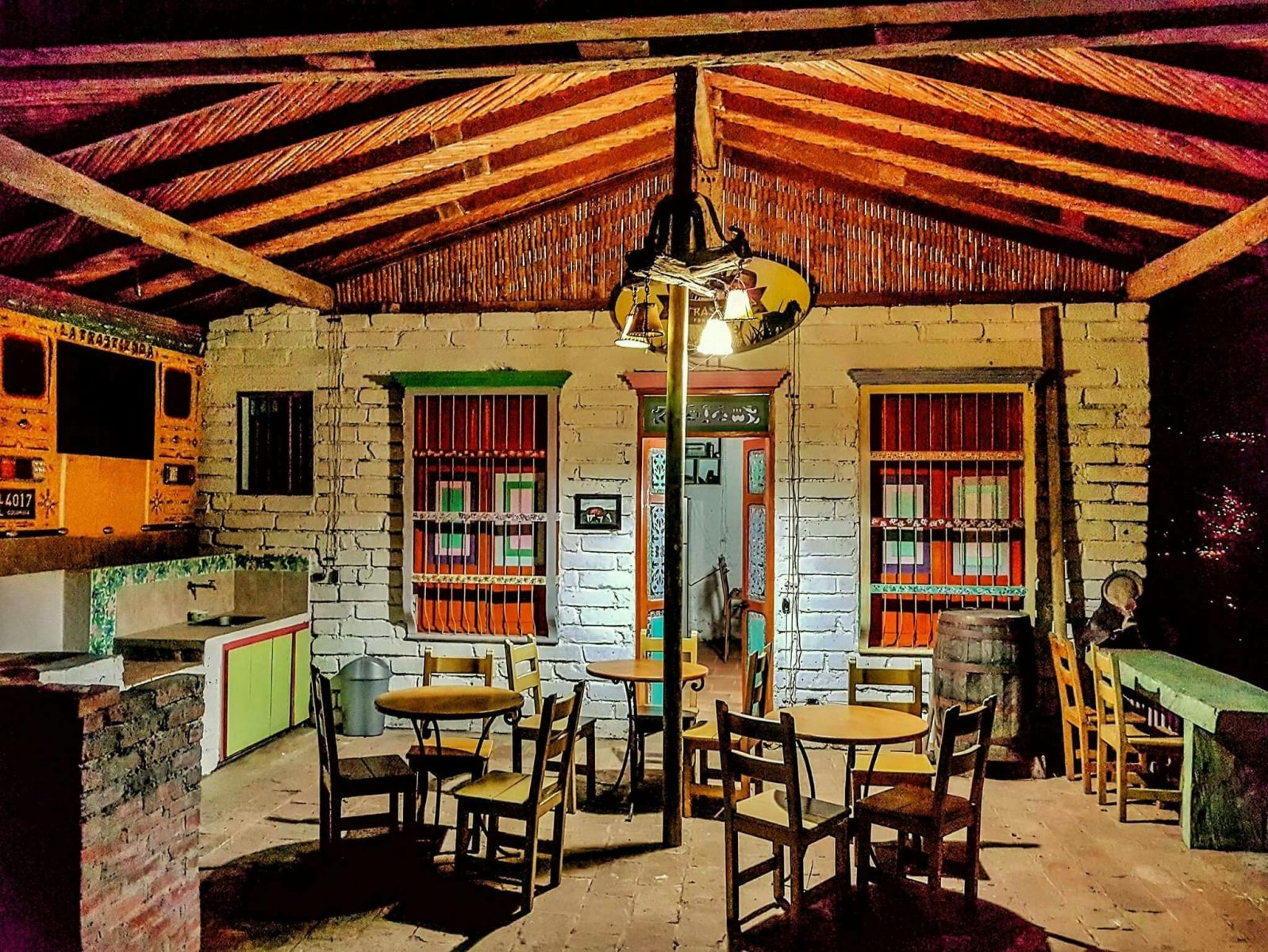 You say barn, I say home

I’m not going to lie, initially I had my reservations, but they were soon put to rest after spending the night in the hills outside Copacabana, lulled to sleep by the crowing of the geese, peacocks and cockerels of the surrounding neighbours. To then wake up to one of the most beautiful views I’ve ever seen. Lush green surroundings, that rode high across the endearing mountain range. The sun, spitting light droplets of heat proving Medellin’s name of ‘The City of Eternal Spring’, and the heavy breathing of Lou, Dani’s welcoming sheepdog-esque pup, who never failed to greet us with morning slobbers and a game of chasing.

This place would slowly become my home from home and to be honest the one place in the world apart from Dublin where I would gladly return to in a heartbeat.

Day one, we were shown to the workshop. Oh god I miss my workshop. This was, as they say, where the magic happens. We started by sorting through bags of cocao beans to ensure only the top quality beans of each batch are used. Each bag containing beans grown in and around the different regions of Colombia, from the Sierra Nevada to Santander and Tumaco, each destined to end up in a different bar. With the objective to bring rich and somewhat healthy tingle to the tastebuds, all while supporting local farmers and local businesses alike.

If this sounds tedious to you that’s because you’re not imagining doing it at your own pace, in perfect 25 degree weather, blaring an 80’s power ballad playlist and staring out with a God’s eye view of the sloping barrios of this amazing city. I genuinely thought it couldn’t get any better, and then came the roasting.

In a sort of half oven, half cement mixer contraption, we roasted the beans to a specific temperature until the fragrant aroma of chocolate filled the air and our nostrils, giving this already heavenly place an even more magical touch. I’m getting hungry even thinking about it.

Next was the slightly tedious task of deshelling the beans and separating the bean from the shell, but once this step was complete then it was all fun and games. We would load all the ingredients into a big mill where they would stay churning for days until they formed a thick silky mass that would eventually become the bars of brown gold, we all know and love.

Lastly the bars were moulded into shape and packaged, ready to wing their way to their, oh so lucky recipients (except of course the defect bars that were happily consumed by Dani’s oompa loompa’s AKA me and Katie). 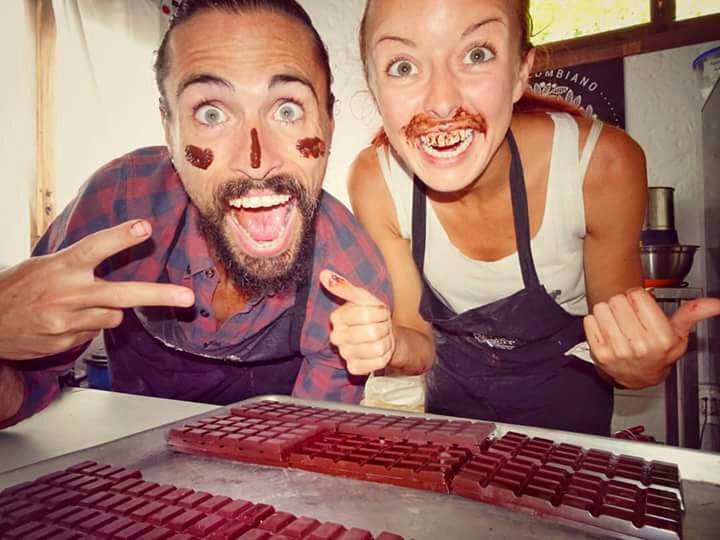 Talking to Dani during our training, it was immediately apparent that she is not only incredibly knowledgeable but also super passionate about chocolate. This is most definitely reflected in the quality and taste of her products. I know, I know, it seems like I’m being biased, but really you have GOT to try this chocolate… it’s unreal, especially the white chocolate with caramelised cocoa nibs, or the filled cookie butter bars. Yup… COOKIE BUTTER.

This…. is a silky chicken (not the redhead)

Dani’s house is the stuff of fairytales. It constantly smells of rich, sweet chocolate, and is inhabited by a menagerie of animals. When we first arrived it was just a dog, Lou, a cat, Trixie, a silky chicken named Dixon and two geese, Gustavo and Girdy (and of course Dani, one of the coolest people I have ever had the privilege of meeting) but we were informed that we would soon be joined by a whole new flock as Dani was incubating a load of eggs (incoming five more Silky chicks and eight Indian runner ducks). 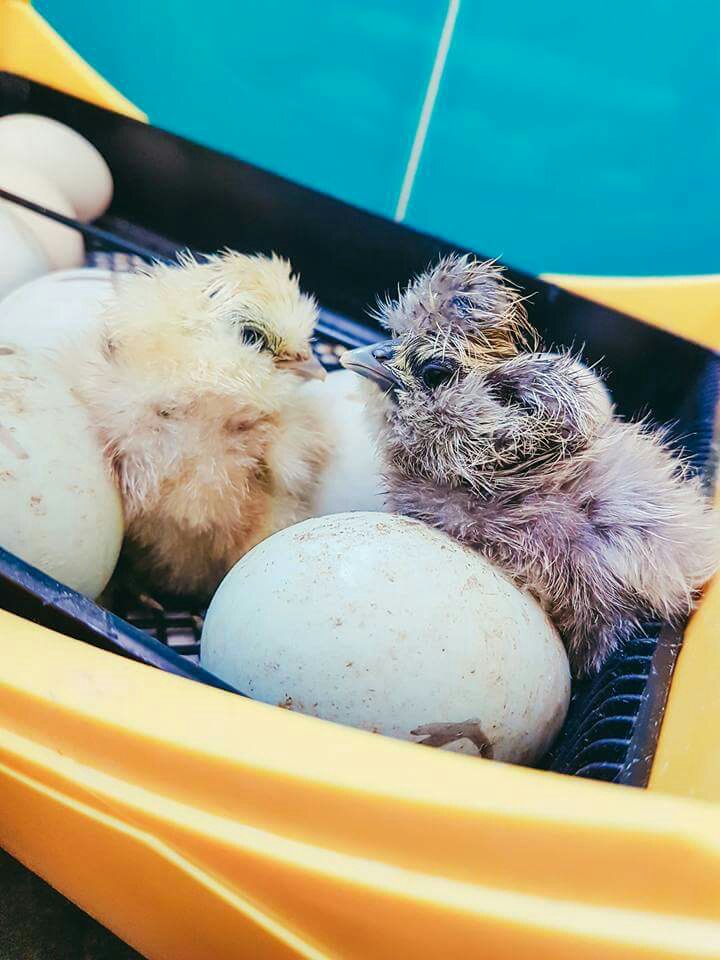 This place is chick central

Imagine our surprise and joy when the little guys hatched and part of our duties became to bathe and play with five chicks and eight ducklings. Who wouldn’t love that? To say we were in our element would be a massive understatement.

When we initially signed up for the position found on HelpX, the terms were to stay a month. We stayed eight weeks. That should tell you how much we enjoyed our time here. We spent many nights in Dani’s company, solving the problems of the world or just shooting the shit.

We came as volunteers and left as family, slightly chubbier, with a few spots here and there and a greater appreciation for the fine art of chocolate making. I can genuinely say that this experience is a huge part of what has made Medellin so special for me.

**Dani and Origen Cacao have moved to a new and improved premises, adopted more animals and will be starting chocolate making tours in the not too distant future.

If you would like any more info on the tours or volunteering, please feel free to get in touch and we will pass on your details. I promise it’s an experience you won’t ever forget. I know I won’t.

Why not enjoy this MTV cribs style look at where we stayed:

Or this step by step guide to the chocolate making process: